All Aboard Survive First Alaskan Sinking 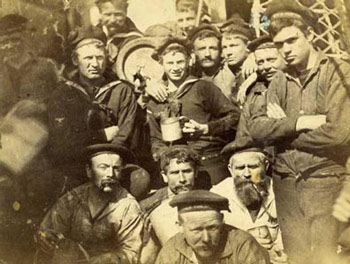 When it comes to American shipwrecks, the three-mast barque Torrent is often overlooked. What might have been a worse tragedy had a happy ending as more than 100 men, women and children escaped the cold waters of Kenai River at Cook Inlet and made it safely to shore. Fortunately for everyone, the sinking took place in the summer of 1868, preventing the survivors from facing the cold blasts of an Arctic winter.

The Torrent was the first American ship to sink in Alaskan waters, the United States having acquired the territory from Russia one year earlier. The idea was to protect American interests in the newly acquired land, which meant building forts for future protection. The Torrent’s assignment included transporting a U.S. Army Artillery Company to construct a new fort near the mouth of the Kenai River which would be about 160 miles from what is Anchorage today. Cook Inlet cuts a watery swarth into south/central Alaska which was discovered in 1778 by Capt. James Cook in his search for the northwest passage. The Kenai is a tributary of the inlet. 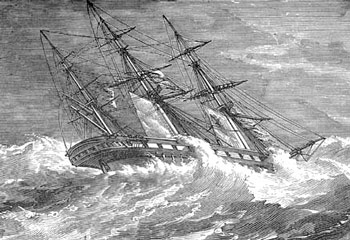 Two other forts were to be built at the same time, one at Sitka and another at Kodiak. Battery F of the Second Regiment of the United States Artillery was chosen to raise the first one. Departing Fort Vancouver, Washington Territory, under second in command Lt. John McGilvray, the ship was adequately loaded. Provisions were to last six months and a follow-up vessel, the Milan, carried 267,000 board feet of lumber and 300 tons of coal. The Torrent carried lumber in addition to 125 enlisted soldiers, five officers, four laundresses, two servants and 11 children. They shoved off from Washington on June 11, 1868, under the command of Capt. Richard Carlton, sailed for almost a month and reached Kodiak Island on June 7. The following day, Capt. Carlton headed for Cook Inlet through the Chugachnik Gulf (now known as Kachemak Bay). It’s still unknown why the captain followed this route considering his orders were to proceed to the Russian settlement of St. Nickolas near the mouth of the Kenai River, a tributary of the Gulf of Alaska. As the ship approached land, lookouts spotted Kenai (now called Homer). The next day, McGilvray took a small reconnaissance party ashore, but upon inspecting the rugged terrain was convinced it was impossible to establish a post there. Even the likelihood of a

temporary one was rejected due to the many wooded hills and dales in the area. McGilvray conferred with Carleton and together they decided to head for Port Graham, about 20 miles south and establish a temporary post there. But stormy weather was moving in and forced the ship to return to Kenai Harbor and wait until the next day. On July 13, the barque set sail again, entering Cook Inlet where waters were rougher than those in the river. Storms were still around forcing the ship to cling to coastal waters. The next day, the captain spotted Port Graham in the distance, but decided to wait and land there the next day. In calmer waters, but not without current, the ship set sail on July 15 with the first mate at the wheel. Experienced at handling a ship around his home port, he underestimated the distance from shore, misjudged a seven mile an hour current and ran the ship into the rocky reef that extended 300 feet from land. Unable to control the ship in the heavy winds and current, the mate watched as the strong oak timbers cracked open like an acorn, engulfing everything below decks in foaming salt water. 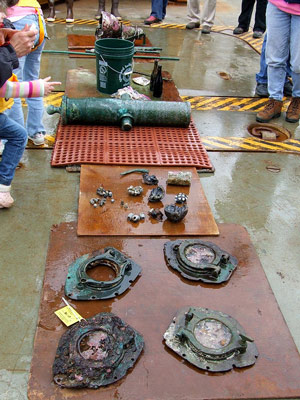 With no time to spare, the captain ordered “abandon ship” and all aboard made it to the lifeboats and reached shore safely. The soldiers were soon rescued by the follow-up ship carrying the lumber. They spent the winter at St. Nicholas and in 1869 built Fort Kenai which was abandoned a year and a half later. The others from the Torrent—passengers and crew—set up camp for two weeks until the Milan and the steamer Fidelater, whose lookout spotted the shipwreck debris trail floating in the water, took them aboard.

As the years passed, forts and towns sprung up and the Torrent became part of Alaska’s early history. Searches for the wreck were fruitless until 2007 when adventurer Steve Lloyd and his dive team found the remains of the historic vessel. Nothing was reported for several days until state natural resources officials documented the wreck ensuring that any artifacts retrieved be donated to Alaska museums. Lloyd agreed and he and his team searched beneath the kelp and under the massive rocks that brought the ship down. “In some places,” Lloyd said, “it was like searching in a field of rocks and tall grass for a lost golf ball.” But things started turning up including two anchors (one 10 feet tall), sections of the hull and parts of the two decks of the 160-foot-long ship. Other finds included the rudder, its heavy pins, a cannon, cannon balls, guns, shoes, ceramic plates, portholes and wine bottles. 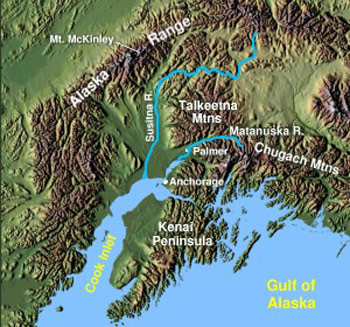 Map shows Cook Inlet and Kenai Peninsula. The Torrent sank near the entrance to the inlet. Credit: Alaska Tourism Dept.

Divers may visit the wreck with the knowledge that it’s protected by state laws and listed in the National Registry of Historic Places. The Torrent is one of more than 2,000 ships wrecked off the coast of Alaska since Russian explorers first arrived in 1741. Further details may be obtained by posting State of Alaska Department of Natural Resources.