One of the Last Forays of Civil War Sinks Beautiful Ship 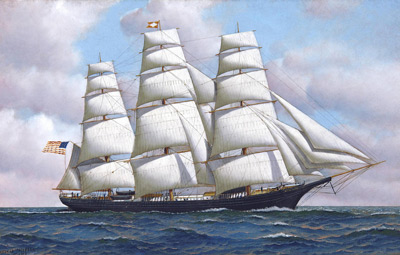 Most popular clipper ships from 1775 to 1850 sported long sleek hulls that knifed through the water at astounding speeds. Credit: Maryland State Archives.

Close to 300 passengers and crew, sailing aboard the clipper ship Adriatic in August, 1864, thought their voyage from London, England, to New York City would be a breeze. Little did they know that an untimely encounter with the CSS Tallahassee, a Confederate coastal raider, would bring imprisonment and loss of their ship which carried supplies for the Union cause. A beauty it was, this “packet” ship, one of many passenger/cargo vessels that followed a regular schedule. Most popular from 1795 to 1850, the clippers sported long, sleek hulls that knifed through the water at astounding speeds. In full force, all 20 sails unfurled, the clippers covered 250 miles a day compared to 150 for vintage vessels.

The CSS Tallahassee was out of its realm having made its way from the Carolinas to Wilmington, Delaware, hell bent on Capt. John T. Wood’s bizarre quest of sailing close to the “Big Town.” Slipping through the Union Navy’s blockade off Wilmington, the 181-foot vessel with a crew of 75 able-bodied men continued north and captured several ships along the way. Capt. Wood sought a pilot from the captured enemy sailors in order to fulfill his quest of sailing through Hell Gate into Long Island Sound. From there he planned to sail up the East River to the Brooklyn Navy Yard, setting fire to shipping on both sides of the riverbank, then cruising toward New York City. But his scheme was scuttled when he couldn’t find a pilot who knew the narrow stretches and tidal flows of the waterway. His penchant for fire unfilled, the captain’s reprisal came when he ordered captured ships set afire. Unfortunately, one of these was the beautiful packet ship Adriatic.

Adriatic was sunk by the CSS Tallahasee. Credit: National Archives

The passengers were nearly all German and when they learned through translation that the ship would be set afire, they panicked thinking they too would go up in flames. The captain let them keep their belongings and arranged for safe confinement until the war ended nine months later (May 9, 1965).

In 1998, John Noonan of Hampton Bays, Long island, New York, jotted down the coordinates of an obstruction located 30 miles south of Montauk, NY, It had snagged fishermen’s nets for years. but he did nothing to satisfy his curiosity about them. Upon purchasing a seaworthy boat in 2016, Noonan mustered five dive buddies for an exploratory dip in the area where the fishermen lost their nets. John Bricker, Ben Roberts and Patrick Rooney, all Long Islanders, joined Noonan’s team along with Jim DiSciullo of Yonkers and Andrew Favata of Brooklyn, NY, for a “wow” discovery. 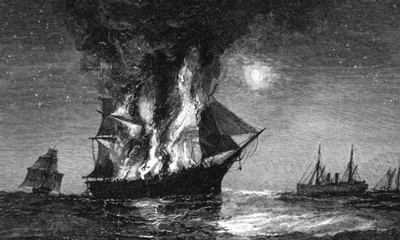 “It was indeed a shipwreck,” Noonan said. “It was worth all our efforts when we saw the remains of a mid-19th century clipper ship and realized the historical value of the site.” Artifacts lay on the ocean bottom scattered among burnt timbers. The divers found dozens of ink bottles, lead ingots, rolls of zinc, a rare blue and white porcelain bowl and some personal belongings left behind by the passengers and crew. Most amazing were the 2,155 pieces of wrought iron rails stacked like lumber in the sand. Roberts later found a ship’s manifest in the National Archives that listed the rails and other cargo destined for merchants and industries in New York. The wide range of artifacts found was surprising when one considers this was a wooden ship that went up in flames and was exposed to salt water, storms and trawler nets for over 150 years. Many coastal wrecks from this area have been scattered, burned or disintegrated, leaving few traces of the glorious days of clipper ships. 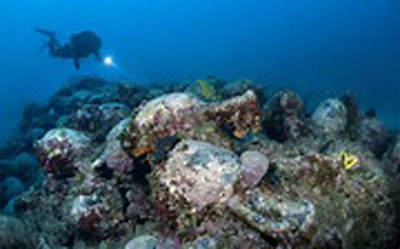 The Noonan dive team hoped to experience a “eureka” moment to positively identify the ship. The bell usually has the name of the vessel on it but has yet to be found. Roberts’ research was boosted by his “smoking gun” discovery of an invoice for dozens of ink bottles with the name of the merchant who was buying them stamped on it. Invoices for various merchandise were found and matched up with artifacts, none of which will be sold. The divers have been exhibiting them at museums, conventions and clubs so the public can share in this great American history. “Finding the wreck of the Adriatic is an amazing feat,” said Harrison Hunt, a former Nassau County museum supervisor who co-authored a book with Bill Bleyer: “Long Island and the Civil War.” (Arcadia Publishing Company, Charleston, SC). Many Long Islanders found the book very significant in that it revealed how close Civil War raiders came to their shores. 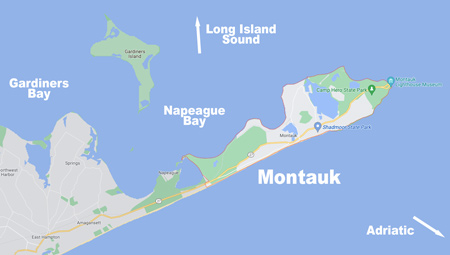 John Noonan and his team returned to the site four more times before sharing the exploratory rights with scholarly partners. These deep dives are not for everyone. It’s 220 feet to the bottom, visibility isn’t good and currents are unpredictable. The divers used rebreathers instead of open circuit scuba, giving them more bottom time and fewer decompression stops.

What happened to the warship that sank the Adriatic? As the Confederate surrender approached, the CSS Tallahassee returned to England where she was sold to the Japanese who used it as a naval cruiser.