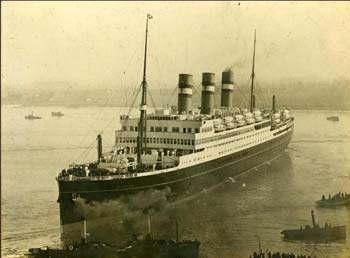 The 776-foot-long SS Statendam was a passenger/freight carrier before it became the troopship SS Justicia. Credit:Holland America Line

German U-boats were very successful during WWI, sinking many British merchant ships with 38 submarines at the start of the war, 1914, and 334 by the end of it, 1918. The United States was slow entering the fray, but moved faster when the liner RMS Lusitania was torpedoed and sunk off the Southwest coast of Ireland. Of the 1,195 fatalities, 125 were American citizens. Soon after the disaster, U-boats were sinking American merchant vessels. The Germans published warnings stating that all waters around the British Isles were considered war zones and that all ships would be attacked without warning. This included unarmed merchant vessels. These attacks, especially on the Lusitania, prompted the United States to enter the war, April 6, 1917.

Of the many skirmishes between U-boats and Allied ships, one stands out as an ironic encounter. The new cruise ship SS Statendam of the Holland America Line was launched in the summer of 1914 in Belfast, Ireland. Some called it the “Mini Titanic,” with its spacious promenade deck, elegant stacks and luxurious interior design. But tourists never experienced its splendor, giving it up when the British government acquisitioned it for a troopship. The government turned maritime operations over to the White Star Line which used a crew from the Britannic, sister ship to the Titanic. Most of the crew survived when the Britannic sank after striking a mine in the Aegean Sea. 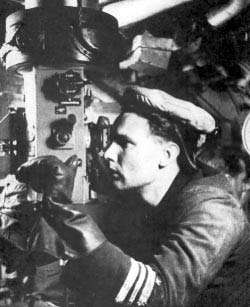 Renamed Justicia, she was painted with “razzle” camouflage (later referred to as “razzle dazzle”) consisting of complex intersecting geometric shapes. Ferrying troops wherever needed, always with an escort, she sailed for 15 months before being struck by two torpedoes from the SB U-64 which was seeking targets 23 miles south of Skerryvore, Scotland. When its watertight doors closed, the former passenger ship began to list, but failed to sink. Two more “fish” were launched from the SB U-64, striking the troopship which was sailing without troops or cargo. But the 32,234-ton victim refused to sink. A destroyer escort depth-charged the sub, but damage was minimal and the enemy slipped away. Quick thinking Commander, Otto Von Schrader, recipient of the Iron Cross and other German High Seas Fleet honors, radioed the position of the skirmish before departing. The troopship, having lost power, was boarded by a skeleton crew from the tugboat Sonia which took her in tow in an attempt to beach the stricken vessel near Lough Swilly, Ireland. When the attempt failed, the battle continued as another U-boat appeared on the scene. 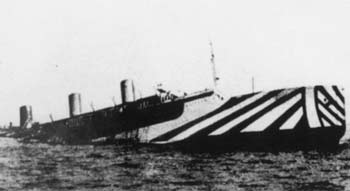 Hans Oscar Wutsdoff was the 27-year-old commander of the SB U-124. He had only one kill in his three month old attack submarine and was hungry for another one. Using the SB U-64’s last coordinates sent by Von Schrader, Wutsdoff tracked down his prey the next day and sent two more torpedoes that struck the Justicia amidships. As the temporary crew scrambled to leave, the 776-foot-long vessel rolled on to its starboard side and sank. As the sub left the scene, it was tracked by three destroyers and sunk. There were no survivors. 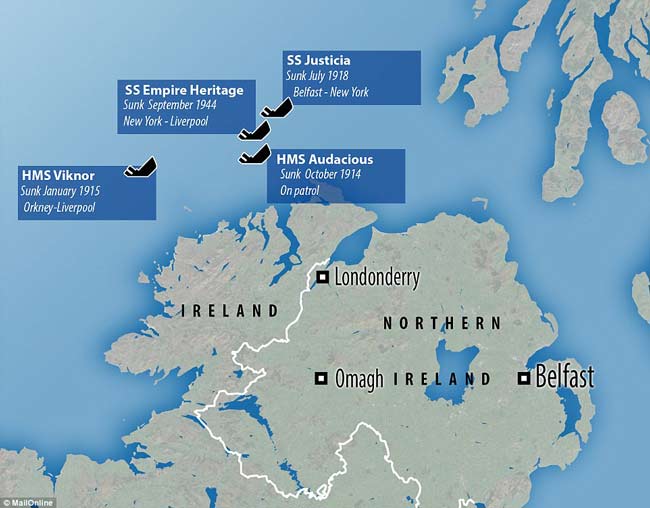 Map shows location of the SS Justicia along with other shipwrecks in the area. Credit: U.S., Navy

In conclusion, there’s an ironic twist to the story. The enemy’s submarines sank a British ship and in turn, lost one of theirs. But who got the best of the battle? The Germans thought they did, by knocking out a troop carrier and one that would have dominated the Trans-Atlantic Passenger trade in peacetime. On the other hand, if the submarine continued to sail, it could have added many more ships to its kill list. 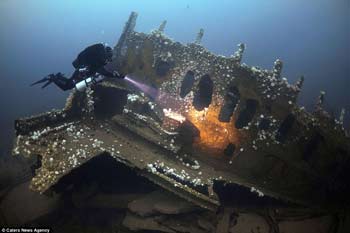 The remains of the Justicia can be found in 235 feet of water 28 miles northwest of Malin Head, Ireland. Dive boat operators who cater to tech divers (divers going deep while breathing special gases instead of compressed air) schedule periodic expeditions to the wreck site. The water is clear but loses some of its clarity as divers descend to the bottom. Experienced divers enter the wreck through large windows blown out during the attacks. They are asked to leave souvenir artifacts in place to honor those lost in the battle. Photographic opportunities are plentiful using rustic backdrops of the ship’s exterior.

Side note: After the war, the British government gave the Holland America Line 60,000 tons of steel as compensation for the loss of their valuable vessel. The company put it to good use building a fleet of freighters. In 1921 it ordered another SS Statendam, a 28,291 ton cruise liner which was fancier than the one that was lost. Construction dragged on until 1929, but upon completion it met the company’s high standards for reliability, exemplary design and seaworthiness.