The SS Coimbra: Still Active Lest We Forget 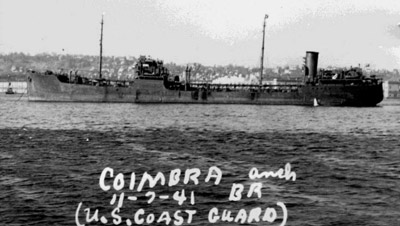 When Bob Allen gave a talk before a Long Island, New York, dive club, he began with: “We owe our lives and allegiance to those who fought for and won freedom from tyranny years ago. Lest we forget, there are still reminders of the conflict and our victories over Germany and Japan. One of the memories is sunk right here off our Long Island shore, continually reminding us of her role in WWII.”

Some of the divers present were familiar with the shipwreck Allen was referring to: the British tanker SS Coimbra sunk January 15, 1942, by a German U-boat. For years the 8,038 ton vessel sent up an oil sheen to the surface, a sort of surrealistic reminder of the past. The U.S. Coast Guard tracked the dribbles with satellite technology which revealed its source. But as the years passed, the tanks rusted and an increased oil spill threatened the shorelines from New York to the Carolinas. That’s when the Coimbra Contract Corporation of Miami, Florida, teamed with state and federal 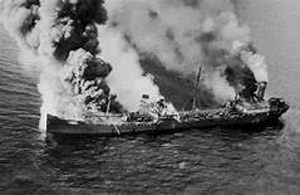 Two torpedoes from the U-123 sank the ship Credit: U.S. Coast

agencies for one of the largest salvage operations ever conducted in the United States. In a coordinated effort by the U.S. Coast Guard, New York State Dept. of Environmental Conservation and the salvage company, 476,000 gallons of lubricating and fuel oil were removed in May, June and July, 2019. It took several days to empty one tank. A remote operated vehicle (ROV) helped clear the debris, revealing two dozen tanks. Hard hat divers averaged 80 minutes per dive on the bottom at 180 feet, followed by long decompression stops in the water and in a chamber. A memorial service was conducted by all agencies and the salvage company to honor those who were lost in the tragedy. Only 6 of the 36 crew survived the attack. The captain didn’t make it. 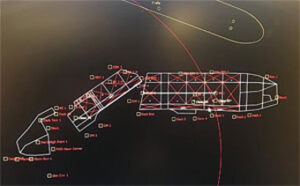 One of Commander Reinhard Hardegen’s specialties was attacking U.S. and Allied vessels. Considered one of the “aces” of the German U-boat High Command, he was credited with sinking 22 ships. He received many citations including the Knight’s Cross with oak leaves, the highest military decoration of the Third Reich. Hardegen was given command of the U-123 at age 28 and participated in Operation Drumbeat. This surprise, tactical operation sent waves of five class IXB large size submarines to U.S. waters with orders to strike quickly and return home. The commander did well in the operation, but the Germans needed a U-boat training and weapons development specialist and chose him for the job. Near the end of the war, the highly decorated Hardegen was captured by the British in his home town of Bremen. A prisoner of war for a little over a year, he became a businessman at war’s end and a member of the Bremen Parliament. He died in 2018 at age 105. 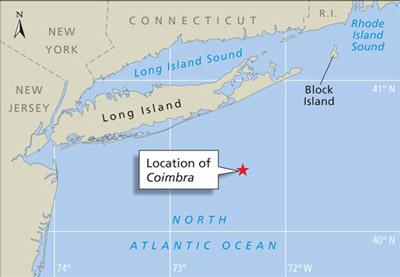 The five year old steam tanker Coimbra, named for a city in Portugal, was a victim of Operation Drumbeat. Prowling the inshore waters of New York City, Hardegen wrote in his log: “We surfaced and saw the lights of Manhattan’s skyscrapers. It was a thrill to be so close to U.S. shores.” On its way out of New York waters, the U-123 spotted and sank the Canadian based British ship 27 miles off Long Island’s Shinnecook Canal. On its way from Bayonne, New Jersey to Halifax, Nova Scotia, Canada, its bright running lights showing, the Coimbra was a sitting duck. Hardegen took his time, fixed his sights on the masthead lights and fired his first torpedo. On target, the “fish” struck the stern and lit up the evening sky like fireworks. Aboard the tanker, Capt. John Barnard sent out an SOS as his ship began to list. Having seen the bright lights of New York City, Hardegen knew that shoreline defense responders would hear the explosion and spot the fiery exposition. This prompted him to fire the second shot, which stuck the tanker amidships, sending up more pillars of light. It was enough to sink the ship. The stern settled first, striking the ocean bottom within five minutes, while the U-123 left the scene to seek other targets. So far, Operation Drumbeat was working and soon the U-boat, its commander and crew, would be returning home. 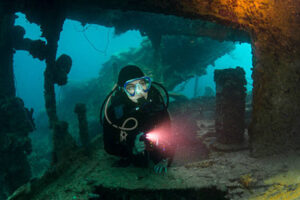 Diver explores one of the many easy to reach parts of the wreck.Credit: Coimbra Contract Corp., Miami, FL

Technical divers (“tech” divers) visit the wreck from aboard one of the dive boats out of Long Island. They use special gases that give them extended time at greater depths as opposed to compressed air used by sport divers. Whether they are photographers, spearfshing enthusiasts or lobster foragers, divers always find plenty of subjects to their liking. The 423-foot ship broke into three sections. Its bow faces east, the mid-section leans to port and the stern rests on its starboard side. Pollock, cod, hake, eelpouts, sea bass and other ocean species frequent the wreck. There are sharks too, usually threshers or blues. Large size Atlantic bluefin tuna feed on bait fish June through November. Dive charters share the site with fishermen during the tuna season. 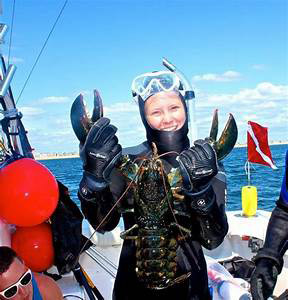 The Coimbra fell victim to an aggressive enemy, one of thousands of ships lost during WWII. Although most of the oil was pumped out of the ship, pinhole leaks remain in the bottom of some of the tanks, candidates for another glimmer on the surface. But why not? The oil slick would just continue to float over the wreckage, a perpetual reminder of lives lost and sacrifices made.