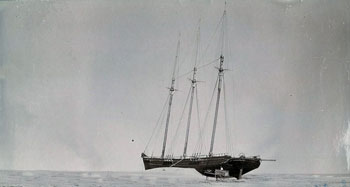 In early days, when ships grounded near shore or became stranded on a rocky coast, there was neither Coast Guard nor means of communication to get help. The only rescue efforts came from the U.S. Lifesaving Service if there was a station nearby. Such was the case on October 11, 1896, when the schooner E.S. Newman ran aground in distressful circumstances.

The elegant three-mast cargo carrier, its sails blown away, was caught in a raging hurricane that was sweeping the east coast of the United States. That it was in the confines of North Carolina’s renowned “Graveyard of the Atlantic” added to its woes. En route from Providence, Rhode Island to Norfolk, Virginia, to pick up a load of coal, the ship drifted almost 100 miles in powerful winds and torrential rains before running aground south of Pea Island, Rodanthe, on the Outer Banks. 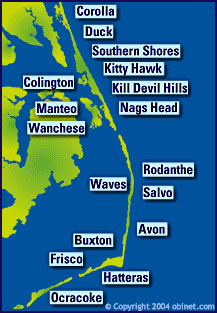 It was impossible to launch lifeboats with the seas crashing into the starboard side of the ship. Capt. S.A. Gardiner could only hope that a signal would attract the attention of one of the 25 lifesaving stations along the Carolina coast. The captain fired a skyrocket and said a prayer for help. His plea for survival wasn’t just for himself and his crew. He had eight people aboard, including his wife and three year old boy, not unusual in those days when mariners were on a short run.

At the Pea Island Station Number 17, Officer Theodore Meekins was on watch duty at seven p.m. when the rain let up, leaving dark clouds on the horizon. That’s when he spotted a rocket high in the sky coming from the south. He quickly sent one up in return, acknowledging what might be a call for help from someone down the coast. When he reported it to Capt. Richard Etheridge, little did Meekins know he would be playing a major role in one of the most daring rescue attempts ever made by the service.

Etheridge was appointed head station keeper in 1880. A former U.S. Army sergeant, he proved to be exceptional at his job. He was hard-nosed, but respected by his men who worked diligently under his direction. He hired a crew composed of veterans with whom he had served. None of them were surprised when their leader ordered hundreds of pounds of equipment loaded into a beach cart for immediate deployment on what became a two mile trudge in wet sand. 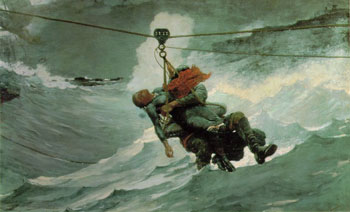 Wind and waves prevented the use of the breeches buoy. Credit Pea Island Preservation Society

The Keeper and his crew came upon a frightful scene when they reached the shipwreck. The schooner was grounded between two sandbars that had formed about 75 yards offshore. The ship was sinking and gradually starting to break up as high waves continued to hammer it. The survivors clung to the railings in anticipation of being saved, but Etheridge had a problem. None of the equipment used in past rescues was suitable in these conditions, so they turned to the old reliable Lyle gun and breeches buoy. David Lyle, an army ordinance specialist, invented the small cannon in 1876 and by 1906 it was responsible for saving 4,500 lives. Simple, yet effective, it was the forerunner of today’s zip line. First it fired a light line to the ship. This allowed the surfmen to send out a heavy hawser (rope) to be attached to the schooner as high as possible to form a zip line with a breeches buoy attached. The survivor sits in a canvas support resembling breeches, (knee length trousers) with a buoy around his waist and gets the ride of a lifetime. But the wind and waves heightened and the crew couldn’t use its favorite means of rescue. 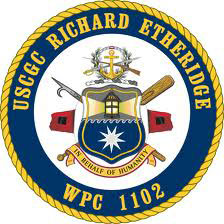 Etheridge looked over the predicament and quickly tied his two strongest men together: Stanley Wise and Meekins, who was the lookout earlier, and linked them to shore with a heavy rope. The lifesavers fought through the harrowing conditions, reached the ship and brought back the mother and child first. The rest of the crew took turns, Wise and Meekins going back more than once. All aboard were saved and the ship broke up from the battering of this storm and others that followed. Shifting sands eventually buried the remains of the E.S. Newman. The survivors were taken to the station where they were cared for until they could make arrangements to return home, while the men of Station 17 returned to their duties awaiting the next rescue attempt.

But there’s more to the story. Capt. Etheridge and all of his men were black. The superintendent of the service knew of his impeccable military achievements and hired him. He was told to choose an all black crew. In those days, it was difficult for blacks to be hired for responsible jobs. But it didn’t take long for this crew to prove they were the best, making hundreds of rescues in some of the most treacherous waters along the coast. They risked their lives to save others regardless of race. As the late radio broadcaster Paul Harvey said: “Now you know the rest of the story.” 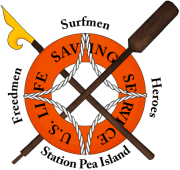 Capt. Etheridge served as keeper for 20 years before he became ill and died at the station at age 58.The station continued to be manned by an all black crew through WW II before it was decommissioned in 1947. In 1996, the Coast Guard awarded its gold lifesaving medal posthumously to the keeper and his crew for the heroic rescues from the E.S. Newman. On August, 2011, the U.S. Coast Guard Cutter Richard Etheridge, one of the Sentinel class cutters, was launched and named in honor of the legendary leader.

Note: The saga of the brave captain and his crew continues thanks to the Pea Island Preservation Society that offers visitors an opportunity to relive the days of Station 17. The original cookhouse is now a museum in Manteo, Roanoke Island, North Carolina. It commemorates the dedication and service the Pea Island lifesavers contributed to the history of our country. On display are the original signboard from the E.S. Newman, photographs, records and other memorabilia from the station. For details of operation go to: peaislandpreservationsociety.com or call: (252) 573-8332.

Special thanks to Darrell Collins, President of the Pea Island Preservation Society, for recounting the history of the rescue and the U.S. Lifesaving Service.