SS Princess Sophia: Oil Soaked Dog Was the Only Survivor 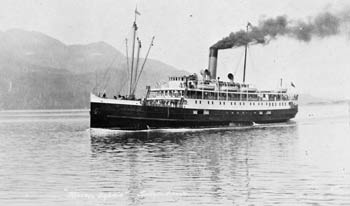 The SS Princess Sophia was one of four “Princess” liners to sail the Alaska/Canada Inside Passage. Credit: Library of Congress

Unless you’re from Alaska or Canada, chances are you’ve never heard of the SS Princess Sophia, named the “Titanic of the West Coast.” One of the worst tragedies to occur inside Alaska and Canada, the 2,320-ton, 245-foot steel hull passenger ship sank in late October, 1918. Yet, the sinking and loss of 353 lives received little publicity. The November 11, WW I armistice was so close at hand, newspaper articles mostly highlighted wartime news and Germany’s forthcoming surrender. 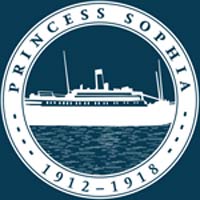 Logo of the SS Princess Sophia owned and operated by the Canadian Pacific Railroad. Credit: Alaska Dept. of Tourism

Princess Sophia was one of four “Princess” coastal liners built in 1910-1911 for the Canadian Pacific Railway. They carried passengers, freight and mail. Their routes along the 90-mile-long Lynn Canal (not really a canal but an inlet) on the Inside Passage included Vancouver, Victoria, Ketchikan, Juneau, Skagway and more. The Princess Sophia departed Skagway bound for Vancouver and Victoria on the last seasonal run of the tourist season. The Lynn Canal’s location as a waterway to the northwest interior made it a major route free from threatening ocean mishaps. But it doesn’t mean the canal couldn’t dish out some rough weather too.

Princess Sophia was three hours off schedule leaving Skagway just before snow started to fall. Winds picked up and fog engulfed the ship as Capt. Leonard Locke maneuvered his ship through the labyrinth of islands, islets and fiords. Despite the harsh conditions, Capt. Locke, 25 years a master maritime pilot, opted to push his vessel through the maze of islands at eleven knots instead of the usual four. Perhaps he was trying to make up for the late departure. Regardless, this was still a fast pace in threatening weather conditions. As visibility dropped to nearly zero, the ship went a mile and a half off course and slammed into Vanderbilt Reef. 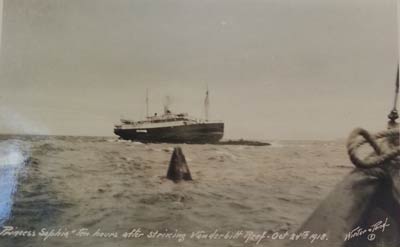 The Princess Sophia went up on the reef and looked liked a cherry on top of an ice cream sundae. Credit: Library of Congress

As a rocky outcropping in Lynn Canal, Vanderbilt Reef is visible at low tide, but wanes at high tide. The liner took a robust hit, propelling it up on the reef where it became stranded, looking like a cherry on top of an ice cream sundae. A wireless call for help brought seven rescue vessels from Juneau. Several stayed and circled for three hours. One of them launched a lifeboat, but had to retreat in the rough seas. Meanwhile, aboard the ship, Capt. Locke assured his passengers the storm would abate by morning and lifeboats could be launched on the 5 a.m. high tide. But when the rescue vessels returned, they found nothing but a heavy oil slick. The storm had become a northern gale overnight whose winds and waves took the liner down the sloping reef where it bottomed out 100 feet deep. All aboard the ship perished except for a dog, an Irish setter that was found days later 20 miles from the wreck site, starving and soaked with oil. 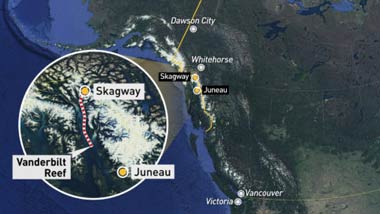 In the aftermath of the tragedy, the Daily Alaskan reported: “Seven mile long Vanderbilt Reef, 30 miles north of Juneau, lies beneath the surface of Lynn Canal and has long been a menace to navigation. The Canadian Pacific’s request for a light on the reef was rejected a year ago and so were pleas for more navigation aids along the canal. In this opportune moment, something must be done to minimize the risk of further tragedies in the waters of British Columbia and Alaska on vessels’ interweaving route from Skagway to Seattle.” 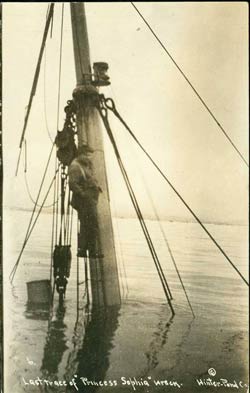 A man, who was lost later, clings to the mast of the sunken ship. Credit: Library of Congress

As a result of media attention and pressure on politicians, a light was installed on the reef and more nautical aids were erected on Lynn Canal. At the end of inquiries and legal battles over the loss of the Princess Sophia, a final decision stated that everything had been done by the railway and Capt. Locke to save the lives of all aboard the ship. But three questions, that some call “mysteries,” remain: Why was the ship going so fast? And how did the captain, with all of his experience, allow the ship to go over a mile off course in threatening conditions? Was this catastrophe an error in judgment where the skipper rolled the dice and lost? No log was ever found. Notes to a loved one were found in a brief case washed up on the rocks. Those aboard the rescue vessels gave their account of what they saw during the ship’s long hours spent on the rocks. Due to the missing details of the Princess Sophia’s demise, the understanding of what happened during that harrowing time will never be confirmed. A dog, a briefcase and some eyewitness mariners were the only evidence in the passing of a magnificent ocean liner.

Experienced divers visit the wreck site which offers good visibility—25 to 50 feet—accompanied by strong currents. The ship broke in two as it slid off the reef into waters 80 to 100 feet deep—and has been hammered by storms and heavy seas for over 100 years. Boilers remain in the sand surrounded by a maze of steel plating and beams all covered by white sea anemones. Sea lions frequent the wreck to feed on fish that hide in the shadows of the rubble. Google offers “Videos of the SS Princess Sophia” for armchair divers who want to see the remains of a proud ship that tendered a dog as its only survivor.