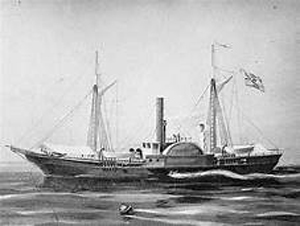 Lake Champlain is the eighth largest naturally configured body of fresh water in the continental United States. Named after French explorer Samuel de Champlain, it stretches for 120 miles, bordering Vermont, New York and a snippet of Quebec, Canada. The lakes’s many ports of call, some going back to the Revolutionary War, cater to commercial transportation and recreational pursuits. Parts of the lake freeze in the winter and sometimes the entire waterway becomes ice-covered. The average depth is 65 feet while the deepest part drops to 400 feet. The lake is home to more than 50 species of fish and countless shipwrecks.

Among 10 shipwrecks listed in the Lake Champlain Underwater Historic Preserve lies a non-descript steamer turned schooner that has played a significant role in the chronicles of the lake’s maritime losses. The Water Witch was a forerunner in the push for preservation that progressed in the 1970s. Historically, the schooner remains one of the oldest intact commercial sailing ships sunk in U.S. waters. Considered small, only 83 feet long, it was launched in 1832 as a single mast steamboat. Working as a general cargo and tow vessel, one of its early routes was between Ft. Cassin, Vermont and Whitehall, New York. She was purchased three years later by the Champlain Transportation Company, placed in towing service for one year, and then converted to a two mast merchant schooner.

The stately looking “Witch” sailed the lake for three decades until 1866 when she foundered not far from shore in a spring squall south of Diamond Island. Iron ore, possibly over-loaded when the ship left Ft. Henry, New York, shifted in rough waters and spilled out of the hold and into the lake. There was no time for those aboard to reach the small boat towed behind the schooner. Capt. Thomas Mock helped his wife and two of their children cling to floating debris until another vessel, the sloop Trader, sailing nearby rescued them and the other survivors. Unfortunately, the captain was unable to reach his infant daughter who tragically drowned in the after cabin.

The Water Witch was discovered in 1977 by Canadian Derek Grout who lost his coordinates and failed to relocate the wreck on another dive. In the early 1980s, Jim Kennard, renowned for his Great Lakes shipwreck discoveries, found the wreck in 85 to 90 feet of water using side scan sonar. Through the efforts of the Lake Champlain Maritime Museum and the Vermont Division for Historic Preservation, this led to the opening of the “Witch” as one of the Historic Preserve sites. A popular attraction, it’s often visited by Advanced Certified recreational divers and diver charter operations from area dive shops. One of these, Waterfront Diving Center, Burlington, Vermont, has been co-owned and managed for over 30 years by Jonathan Eddy. Graduating from Syracuse University as a history major with a penchant for archaeology, Eddy was in the banking business for 12 years before he chose diving as a lifelong pursuit. His knowledge of wrecks, conditions and currents is exemplary as he embarks on his 51st year of diving. 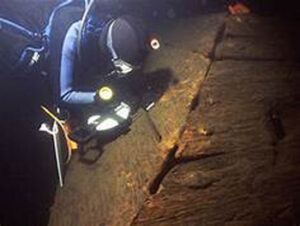 The highly skilled master diver calls the Water Witch a “great dive,” and describes the diving conditions: “Visibility ranges from two to 20 feet,” Eddy says, “depending upon the rainfalls. The Witch is just north of the mouth of Otter Creek and when the heavy rains have subsided, the visibility can improve significantly. If the wind blows from the north, billows of silt often remain a bit south of the wreck. Divers sometimes experience strong currents when approaching the site, but only if the gusts blow in from the north or south through that narrow part of the lake. Usually, the current runs from the surface down to about 20 or 30 feet, and then dissipates on the wreck itself.” Eddy says divers wear seven mm wet suits or dry suits in low 40-degree waters. He requires Advanced Diver Certification on this dive.

The first thing divers see is a wooden cargo schooner looking as if it’s ready to set sail. At the bow, the ship’s port side anchor is chained in place and still hooked into its well. The starboard anchor is nearby, partially covered with sediment. A large, square bowsprit remains in place. Behind it, in the center of the bow, sits a wooden windlass that’s worn from years of raising anchor chain. Two open hatches on the main deck lead to holds bearing silt covered iron ore. At the aft end of the schooner, the quarter-deck rises above the main deck where a stalwart wooden railing remains intact. The stern cabin houses a cast-iron, wood-burning stove, white paneling and the remains of bunks and storage lockers. One of the masts lies broken on the deck, while the other one rests beside the wreck. Divers’ lights reveal a sad sight off the starboard quarter where the small boat rests on the lake bottom. Dragged down by a towrope that has disintegrated, the boat is an everlasting memory of how quickly the Water Witch went down. Wooden cleats, deadeyes, pulleys, the tiller bar and other infrastructure remain in place in cold, fresh waters.

Lake Champlain is a good place to study early American ships and inland navigation. The Water Witch is a good example of many shipwrecks, which through proper management and conservancy, continue to foster the lake’s maritime heritage.