When the trawl net from the fishing boat “Mistake” struck something on the bottom of the Gulf of Mexico in the summer of 1993, Capt. Jerry Murphy was fearful of damage to it. It was indeed ripped in several places when hauled up, but it didn’t matter when Murphy heard his first mate screaming, “Ballast stones and coins, lots of coins!”

When a fishing trawler net hit a “bump on the bottom of the Gulf of Mexico,” it turned out to be a treasure trove of silver coins bound for a Spanish colony in Louisiana. Credit: Marex International

In one of the most astounding, yet captivating yarns in the annals of treasure lore, Murphy’s Mistake had snagged some of the 450,000 silver pesos aboard the Spanish brig El Cazador. The 18-gun warship left Veracruz, Mexico, in the winter of 1784 and by the beginning of summer was declared lost without a trace. Loaded with coins freshly minted in Mexico City, the brig was bound for New Orleans where the Spanish government needed the disbursement to fuel its economy. The colony’s survival depended on the shipment which was listed on the manifest as 17,000 tons of silver. 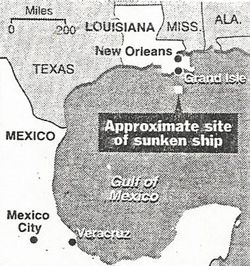 The question of how the ship sank remains unanswered, but poses one particularly titillating theory. Historian Anderson “Buzz” Bullock of Lafayette, Louisiana, believes the brig struck large masses of ice swept down from the Mississippi River. He found from studying winters past, ice floes have on more than one occasion formed over a 200-mile stretch of the river. Records show the winter of 1784 as being extremely cold. When El Cazador left port in January, it would have sailed right into the path of ice possibly broken free further north and drifted into the Gulf. As for a storm theory, if the ship had encountered one, there would have been a typical debris field. There was none. It appears the ship went straight to the bottom. Bullock scoffs at the pillaging pirates theory. He says the 90-foot El Cazador, Spanish meaning the “Hunter,” was a well armed and heavily manned vessel equipped to track down pirates, smugglers and enemies of the crown. 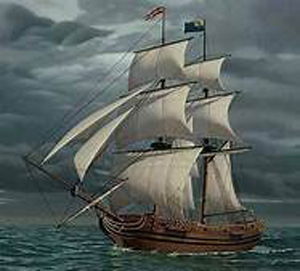 Jim and Myrna Reahard of Grand Bay, Alabama, and four partners purchased three trawlers in 1989, including the Mistake, and formed the Grumpy Company. Sailing out of Pascagoula, Mississippi, fishermen sought butterfish feeding on the bottom in deep waters of the Gulf. On more than one occasion, the Reahards daydreamed of what they would do if one of their boats found a treasure ship. When their dream came true in August, 1993, they agreed the first step would be to hire a good maritime law attorney. They soon found one when David Horan, who won a case in the Supreme Court for treasure salvor Mel Fisher, took the case. He promptly suggested the Reahards form a salvage partnership and file an Admiralty claim on the site. Located 50 miles south of New Orleans, the ship was in international waters where federal maritime law supersedes state law. This was a major break for the company they named Grumpy Partnership. Otherwise, it would have faced the state bureaucracy if the wreck had been found closer to the shoreline. There were permit applications and other delays, but after the Grumpy group appeared in U.S. District Court and won ownership, the door to major salvage was opened. 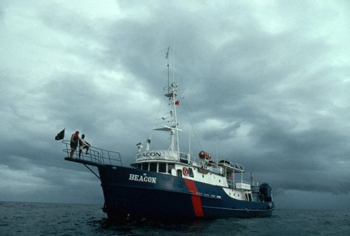 Marex International was chosen to lead the operation. Headed by Herbert “Herbo” Humphreys, a successful Memphis, Tennessee, businessman, the company had earned kudos for finding a trove of gold, silver and precious gems on the Spanish galleon Las Maravillas. But this was in shallow water on the Little Bahama Bank. El Cazador would be more challenging in the Gulf’s deeper waters. Working from the research vessel R/V Beacon, divers breathed mixed gases at 300 feet.

In the beginning, Marex divers found the ship’s bell and 3,000 King Carlos III portrait coins, many of which were eight reales dated 1783. They brought up 12,000 more before surrendering to poor visibility and lengthy decompression stages. That’s when Humphreys put his ROV (Remote Operated Vehicle) to work. Its manipulators adroitly plucked conglomerates of coins off the bottom. It wasn’t long before 30,000 more were retrieved including smaller denominations and more “pieces of eight.” Other 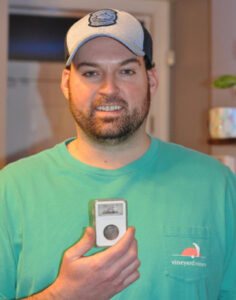 artifacts strewn among the ballast stones included cannons, small arms, pottery, stained glass, rosary beads and galley utensils. Teredo worms devoured anything made of wood. Conservation and preservation of the artifacts was conducted in an Alabama lab where photos and documentation prepared them for sale and museum displays. Ensuing work on the site eventually led to between 70 and 80 per cent recovery of the treasure.

As the chronology of El Cazador unfolded, some historians called it the “shipwreck that changed a nation.” Supposition says if the ship had reached its destination, the colony would have been saved. It couldn’t however, survive the falling value of its paper money and needed hard currency to redeem it. In 1800, the Louisiana territory was ceded by Spain back to France—the original owner—which in turn sold it three years later to the United States. President Thomas Jefferson’s Louisiana Purchase doubled the size of the young republic and altered the course of history, all because a Spanish ship failed to reach its destination.