Proteus Replicates Myth in Graveyard of the Atlantic

It seems fitting that the 390-foot SS Proteus, which sank 20 miles off Ocracoke inlet, North Carolina, August 1918, was named after a god of the sea in Greek mythology. In the myth, Proteus could change appearances at will, something the exquisite luxury liner has experienced in its more than 100 years of entombment in the Graveyard of the Atlantic.

The liner was sailing in a dense fog when she was struck by the Standard Oil tanker SS Cushing. Assessing the damage, Capt. Harry Boyd relayed orders to abandon ship as water poured into a gaping hole amidships. Fortunately, there was only one casualty. An engine room fireman, in a moment of panic just before the collision, leaped overboard and drowned. The undamaged tanker rescued the remaining 94 passengers and crew in an orderly fashion before the liner sank six hours later in 125 feet of water.

Like the Greek god she mimicked, the ship changed its appearance. At first she settled on the bottom looking like a vessel ready to sail, but her image changed when she was declared a navigational hazard during WWII. The U.S. Navy planted charges of dynamite throughout the ship and reduced much of it to a heap of twisted beams and buckled bulwarks. In 2012, Hurricane Sandy rolled the stern over to its port side. 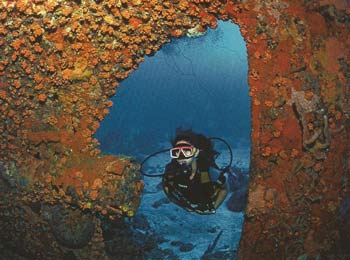 More than 100 years of marine growth flourishes on the Proteus Credit: North Carolina Dept. of Tourism

When the Cromwell Steamship Company launched the Proteus in Newport News, Virginia in 1900, no one suspected she would be sold three years later to the Southern Pacific Railroad. The plan was to offer railway passengers a first-class voyage from New Orleans to New York. The attractive package included the train trek and a cruise aboard a 4,828-ton steamship that had all the amenities of a private yacht. Travelers came from as far away as San Francisco as word spread of this inclusive tender. The prices weren’t bad for those days: $60 round trip first class (48 staterooms) and $20 for steerage (108 berths). Dining rooms were elegant, the main one seating 56 passengers. Cruising at 14 to 16 knots, the five day journey covered 2,000 miles. Powered by a vertical triple-expansion engine with a 54-inch piston stroke, her steam came from three massive boilers.

Embedded in the sandy bottom, the boilers are so large it takes divers four minutes to circle them. Beams, ribs, decks and the engine are scattered from stem to stern. Bollards are so encrusted with marine growth, they’re difficult to recognize. Girders form triangular openings that lead through a maze of darkness bathed by intervals of sunlight. There are no passageways, just nooks, crannies and collapsed cargo holds to explore. The bow is listing, but still retains 10 to 12 feet of relief. Two large anchors lie in the sand. 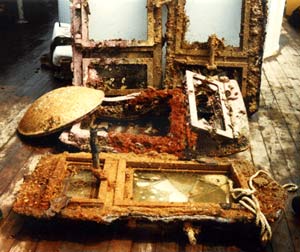 Scott Jenkins, head of Poseidon Adventures, Newark, Delaware, calls the Proteus a “relaxed dive in clear water.” He and his buddy Ken Smith salvaged two of the wreck’s most coveted artifacts: large, rectangular brass-framed windows weighing 150 pounds each. These were the same style windows installed on the Titanic. Many years have passed since divers retrieved them in addition to china, silverware and other “goodies.” Determined “brass hounds” still turn up an artifact now and then, but not as many as they found when the wreck was discovered in the 1970s. An empty safe was salvaged in 1987.

Bill Hughes, State College, Pennsylvania, found dinner plates not far from the remains of the dining salon. He thought he had a porthole until he discovered it was attached to a bulkhead buried in the sand. He and his buddies retrieved other artifacts nearby including brass oil lamps, valves, hinges, door handles and light fixtures. Hughes says the site is “exceptional” due to the warm clear water of the bordering Gulf Stream which brings in throngs of marine residents from tropical waters. 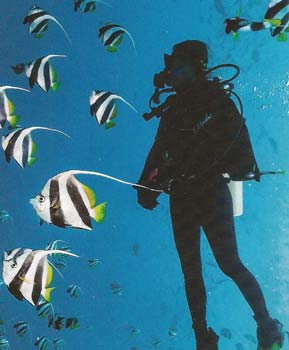 Queen angelfish, rock beauties, clownfish and many other tropicals appear right at home this far north. Thousands of small red herring engulf the ship. Nassau groupers hide in dark crevices as inquisitive red and white spot fin hogfish greet visitors at the bow. Nosy gray triggerfish are amusing at first but soon wear out their welcome by getting in the way. Sometimes they nip at gauges, buoyancy compensator straps and fingers! Nurse and sand tiger sharks cruise the wreck’s perimeter. A lone barracuda hangs motionless about 20 feet from the bottom. Spiny lobsters remain in their dark pockets until nightfall. Sea urchins cling to bulkheads flanked by waving gorgonians and colorful sea anemones. Underwater photographers are never at a loss for subjects in this thriving milieu of marine life.

Nautical sleuths marvel at some of the original photos taken aboard the Proteus showing her majestic grand staircase, ornamental salon and elegant dining rooms. Brass navigational instruments glistened in the wheelhouse where ample sunlight poured through spacious windows. She was indeed just a coastal passenger vessel, yet equal in size and accommodations to her transatlantic competitors.

But the Southern Pacific with all its money, power and prestige couldn’t prevent the unfortunate accident that befell their pride and joy halfway through her journey. Their ship became another spirit in the Ghost Fleet of the Outer Banks, joining the plethora of victims in collisions, storms and wartime losses. Today, these ships’ paths of destruction lead to the silent depths where only divers can enjoy their venerable days of glory.