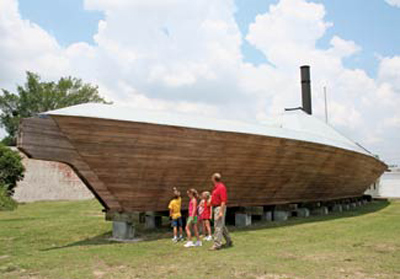 In 1961, when divers excavated the hull of the CSS Neuse, a Confederate Civil War ironclad gunboat burned and scuttled in 1865 in the Neuse River, Kinston, North Carolina, they didn’t know it would be so massive. Nor did they know the future would bring thousands of visitors to the CSS Neuse Civil War Interpretive Center at Kinston to see their prize and a full-scale replica nearby.

Historians knew where the remains were, their records showing that Union forces salvaged the engines, a boiler and the steam power plant. But the excavation of what some locals call the “gunboat,” “ronclad,” or “ram,” and salvaging the 141-foot hull and artifacts, became a formidable task with many setbacks. In hopes of floating the wreck, a cofferdam was built around it using empty 55-gallon drums lashed to the sides. This worked and soon the largely intact remains began to rise as mud and sand was pumped out. But heavy rains swelled the river, the cofferdam collapsed and the gunboat plunged back to the bottom. There were no funds left to continue the project. 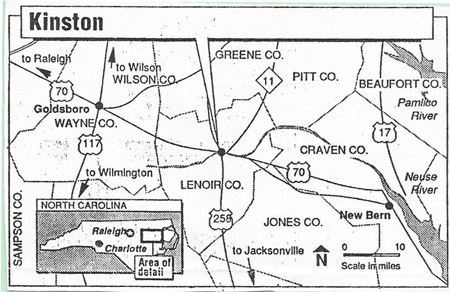 Nothing was done until two years later when three local businessmen stepped up and financed another salvage attempt. This one was successful and the massive lower hull was lifted from its grave and transported to Kinston for preservation. Although the casemate (an armored enclosure for guns) and superstructure were gone, divers and archaeologists from the North Carolina Division of Archives and History preserved and reconstructed the remains. The CSS Neuse Gunboat Association, volunteer non-profit friends of the center, was instrumental in moving the boat indoors.

In 1969, most of the hull and a deluge of naval and personal artifacts had been recovered and displayed at the (Governor) Richard Caswell State Historic Site located near the river. But when Hurricanes Fran in 1996 and Floyd in 1999 reminded everyone that their cherished exhibit was on a flood plain, the Department of Cultural Resources made a wise decision to move. That’s when the interpretative center, a state of the art museum housed in a climate controlled environment on Queen Street, rejuvenated downtown Kinston. As visitors tour the center, its exhibits become time capsules that return them to another era. Displays begin on the first floor encircling the centrally located remains of the CSS Neuse, then flow counterclockwise to other exhibits. 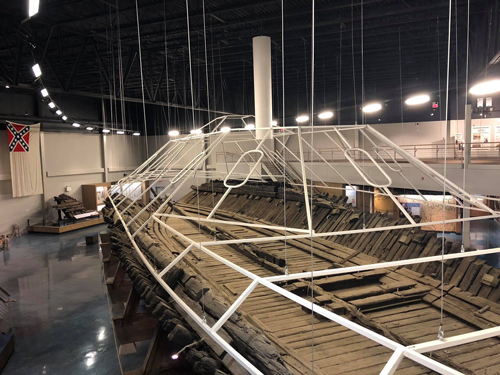 The Strategic Kinston section includes texts, panels, images and maps illustrating why the gunboat was so significant to this remote eastern North Carolina town. The explanation was simple. Kinston created easy access to major transportation routes. The Making of a Gunboat section, highlighted by artifacts and a scale model, traces the development of ironclads in North Carolina during the Civil War. Construction in Whitehall and Outfitting in Kinston showcase more artifacts including a large hunk of the casemate accompanied by armor plating and basic ship components. Replica Casemate features an impressive full-scale reproduction of a portion of the gun deck and its casemate. Visitors marvel at the intricate design of the casemate and the display of a replica Brooke rifled cannon mounted and moveable for demonstrations. Ship’s Wheel and Life on the CSS Neuse demonstrates weapons, power and steering. In this interactive display, visitors take the ship’s wheel and watch as a system of pulleys moves the rudder. Accompanying displays show uniforms, personal belongings, quarters, food and entertainment. Final Days of the CSS Neuse depict the ultimate end where the boat is destroyed by the crew before they evacuate Kinston. Recovery of the Gunboat covers the early 1960s when renewed interest led to salvage attempts and recouping the remains from the Neuse River. 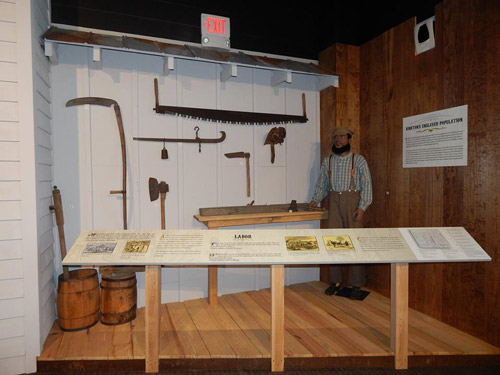 The second floor or mezzanine exhibits include facades of local buildings and wartime life in Kinston. Eyewitness accounts and artifacts such as clothing, tools, textiles and general merchandise capture the life and lore of the period. Foster’s Raid Exhibit portrays Union General John Foster’s raid through eastern North Carolina in December, 1862, when the first Battle of Kinston, the Battle of Whitehall and the Battle of Goldsboro Bridge were fought. Artifacts and lifelike mannequins dressed as Confederate soldiers, sailors and civilians enliven the exhibit.

Site Manager Matt Young says visitors can get a good look at the ship’s hull from the viewing platform in the mezzanine. “Half of the mezzanine has our popular home front exhibit of Kinston, the Lenoir County seat,” Young says, “and we’re raising funds to finish the other half which will cover North Carolina’s military operations during the war.” 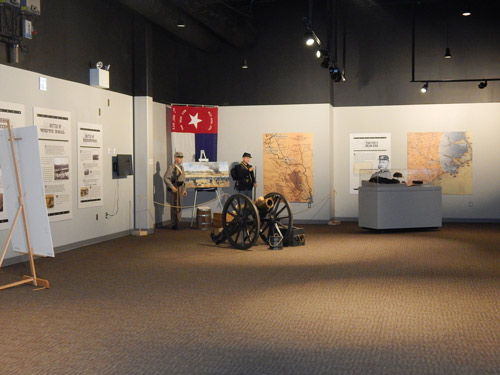 Operations Manager Morris Bass says a full-scale replica of the CSS Neuse II is only a block away on North Heritage Street. Run by a private, non-profit, volunteer group, it’s open for tours on Saturdays only, but arrangements for groups can be scheduled on other days. Bass says, “Here, we’ll conduct tours but most of the time they’re self-guided. We also feature a short film, Brown Water Ironclad, which highlights the history, recovery and restoration of the vessel. Only three other Civil War ironclads have been restored: the CSS Muscogee (also known as the Jackson), the USS Monitor and the USS Cairo. The CSS Georgia, discovered and raised from the Savannah River, is presently undergoing restoration.”

In 1863, after a shortage of iron delayed construction, the gunboat was floated down river from Whitehall (now Seven Springs) to Kinston, where it was fitted with engines, cannons, stores and a locomotive boiler. In the spring of 1864, it was returned to Kinston where Confederate land forces were preparing for a Union attack. In March, 1865, Union troops advanced along the river to within five miles of Kinston and appeared ready to take the city. Commander Joseph Price, realizing he was trapped, followed orders sent from General Braxton Bragg, placed a charge in the boat’s bow and set fire to his vessel. The ensuing explosion blew a hole in the port side and the heavy iron behemoth settled to the shallow water bottom. Northern forces overran Kinston and the boat remained on the river bottom for nearly a century. The CSS Neuse never went to war nor accomplished any heroic feats, yet it remains one of Kinson’s top attractions. It draws wide appeal, not just from Civil War enthusiasts but history buffs as well…especially those who relish the interpretation of human events in the Tar Heel State.