Is HMS Hussar’s ‘Treasure’ in a Landfill? 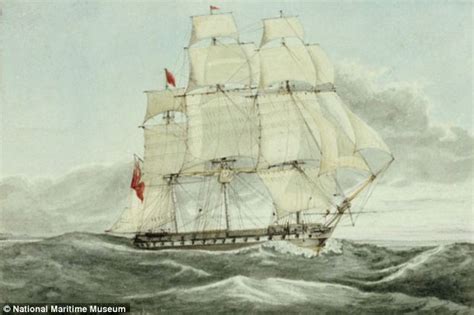 How many times have we come upon the word “purported” when perusing or researching stories about sunken or buried treasures? The Merriam-Webster Dictionary defines “purport” as: “to imply, profess or claim, often falsely.” I would like to add “supposed to be” to the mix as a further warning that some of the epistles we come upon could be, as Webster says, “false.” They might even be legends, such as the chronicle of the HMS Hussar.

During the American Revolution, the 28-gun Royal Navy frigate HMS Hussar sailed as a “dispatcher” on what the navy called its North American Station. By July, 1779, the British positions around New York became vulnerable when the French army joined forces with General George Washington’s troops north of the city. Just before British Admiral George Bridges Rodney took his fleet of 20 ships south toward Virginia in November, he ordered a destination change on what was purported to be the delivery of general provisions and the English troops’ payroll. The admiral ordered the “dispatcher” to set sail for Gardiner’s Bay where an island outpost at the eastern end of Long Island Sound was used to stock wartime supplies.

On November 24, 1779, Capt. Charles Pole decided to take the HMS Hussar on a shorter, faster route to Gardiner’s Bay. Despite his pilot’s repeated warnings, Pole stuck with his plan to sail from New York’s East River through the risky waters of Hell Gate, a narrow channel that lies between Manhattan and Long Island. Shortly before reaching Long Island Sound, strong winds and tides drove the vessel onto Pot Rock, one of many obstructions impeding ships sailing the passage between the Atlantic Ocean and New York City. Leaking profusely, the 124-foot ship sank in 90 feet of water as the captain and crew manned long boats and made it to the mainland. 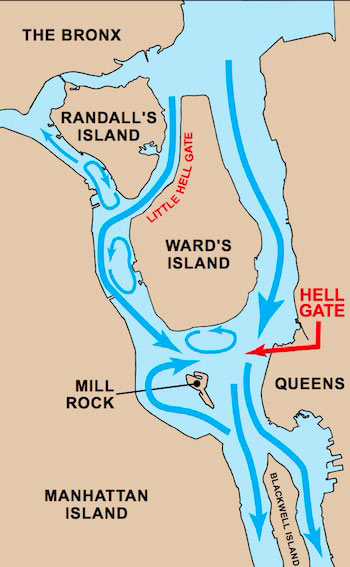 Various accounts of the tragedy emerged, but the British immediately denied that any payroll of gold guineas or sterling silver was consigned on the voyage. Yet, reports spread that $2 to $4 million worth was aboard ship. The survivors never mentioned a valuable cargo, nor was there any listed on the cargo manifest. The Brits offered many denials of the payroll delivery, but were suspect when they conducted extensive salvage efforts. They salvaged some cannons and ship’s fittings, but records revealed nothing about specie (what they called coins). The wreck was dynamited when salvage was over.

In 1876, the U. S. Army Corps of Engineers used 25 tons of explosives that “blew the harrowing aspects of the Hell Gate’s rocky bottom right back to hell.” In spite of all this destruction, salvage efforts continued throughout the years. In the 1930s, submarine pioneer Simon Lake spent years and much of his fortune vainly searching for the wreck. In 2013, after Hurricane Sandy hit the East Coast, recollections of the HMS Hussar surfaced (pun intended). Perhaps the violent storm had churned the waterway enough to wash remnants of the ship ashore. New Yorker Steve Smith, walking the South Bronx shoreline after the storm, discovered wooden planks from a very old shipwreck. But this wasn’t unusual. Hell Gate is full of old wrecks and Smith found no coins.

Rumors circulated that the late Robert Marx, a successful salvor and author, found some coins on the Hussar site. He denied it and wrote in his book, Shipwrecks in the Americas: “I have come across no documentary evidence to support the claim of treasure aboard the HMS Hussar, although there have been articles written for years that say the ship was carrying a large amount of it. Salvage companies have given up, but divers still search for the treasure.”

Bob Sterner of Freeport, Long Island, an accomplished shipwreck diver and former editor of Immersed Magazine, gives fair warning. “Many divers don’t realize the conditions,” he says. “Just in driving past Hell Gate, the waters appear angry. The currents are unpredictable as they swirl in one direction, then another, always moving and boiling like a hot pot. Slack tide lasts about 15 minutes.” 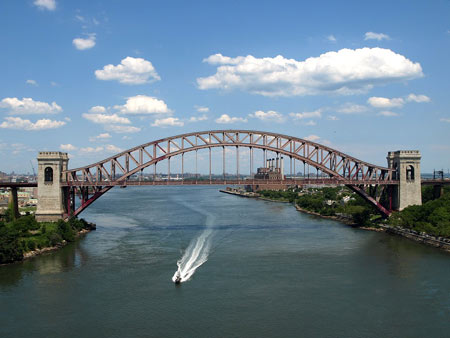 Capt. Dan Berg of Aqua Explorers, Baldwin, New York, has been diving the wrecks of New York and New Jersey for more than 30 years. His books, Wreck Valley Volumes One and Two, are comprehensive guides describing the dive conditions and history behind 100 wrecks off the New Jersey coast and Long Island’s South Shore. He has won awards for his shipwreck television series and received accolades for side scan surveys conducted with Marine Sonic Technology, Ltd. A highly respected maritime historian, Berg says of the HMS Hussar: “From my diving experience and research, I for one haven’t found any proof that a treasure exists.”

Some divers say the British frigate’s remains, if any survived, are beneath a landfill in the Bronx. This might have merit considering New York’s continued infrastructure additions including roads, buildings and parking lots. In Kim Stanley Robinson’s 2017 science fiction novel, New York 2140, a sub-plot centers on an attempt to recover two chests of gold from the wreck of the HMS Hussar that lies under a submerged parking lot in the former Bronx.

The vessel still holds tidbits of adventure. After all, its name was taken from the swashbuckling light cavalry regiments of European armies in the late 17th and 18th centuries. The legend of the treasure aboard the Hussar continues to stir the imagination. Who knows, maybe the next tempestuous storm at Hell Gate will wash some coins ashore. Time will tell and treasure seekers are patient.