He drops eight small pieces of silver into my hand, smiles and says, “Two bits, four bits, six bits, a dollar.” Then he shows me a one ounce eight reale (royal) coin, better known as a peso or piece of eight, minted in New Spain in the 1700s. “Sometimes they were cut into eight pieces, like a pie, in order to make change,” he says. “One eighth of the coin became one bit, one quarter was two bits, one-half became four bits and three quarters made six bits. Two more made a dollar.”

“That’s the origin of the saying you sometimes hear cheerleaders chanting at sporting events,” adds Dale Clifton, director of the Discover Sea Shipwreck Museum, Fenwick Island, Delaware. “These silver dollars were circulated in the English colonies and all over the world. They were good anywhere, anytime and played a major role in Spanish Main treasure lore.”

Clifton is owner and operator, as well as director, of one of the finest shipwreck, treasure and colonial artifact museums in the country. Opened in July, 1995, the museum embodies more than 30 years of Clifton’s diving, digging, bartering and buying sunken and buried treasure and Delmarva (Delaware, Maryland, Virginia) artifacts. If you want to see treasure (admission is free) he’s got it from every major sunken Spanish galleon including the Atocha, Santa Margarita, Conception, Maravilla, El Cazador, San Miguel de Archangel and vessels from the 1715 and 1733 silver plate fleets.

Slowly wending past 40 attractively lit and laid out display cases, visitors are dazzled by an array of gold and silver bars, gold chains and precious gems. The armaments that once safeguarded them are there as well. Cannons and flintlock pistols, with their ammo of balls and shot, reveal the vast protection given to ships and treasures that never reached their homeland and the royal coffers of Spanish kings. Some of the treasure, such as a conglomerate of a dozen eight reales, remain exactly as Clifton found them in the encrusted lump formed by leaking silver sulfide. If he wants to try to bring something back to its original luster, the director simply walks to his adjoining conservation lab where he spends countless hours. Here, in addition to galleon relics, he has restored artifacts from the luxury liners Titanic, Andrea Doria and Republic. Yet, none of these fascinating windfalls from renowned shipwrecks surpasses his love for the Delmarva discoveries. 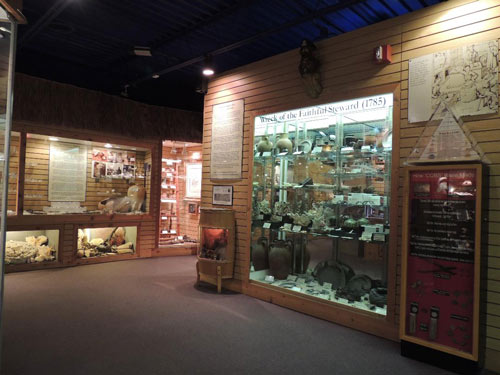 Artifacts from the Faithful Steward (exhibit on right), a merchant vessel sunk off the Delaware coast in 1875

Clifton says, “Most people don’t realize what we have here right in our own backyard. In colonial times, the Delaware River and bay were some of the busiest maritime highways on the east coast. Galleons, pirate ships, privateers and merchant vessels met their fate in these waters. Each has a story to tell and that’s what attracts me to them even more than the lore of treasure.” 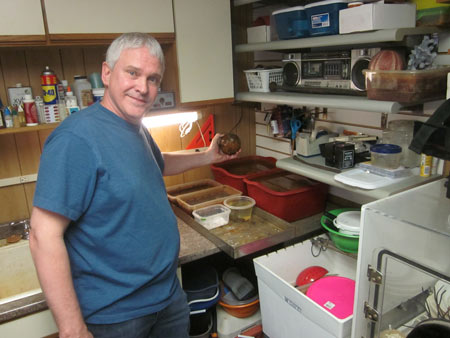 Dale Clifton preserves a cannon ball in his work lab

One of the affable museum director’s favorite accounts is that of the Faithful Steward, a merchant ship that ran aground during a storm in 1875 and was lost near Indian River Inlet, Delaware. Bound from Londonderry, Ireland to Philadelphia, Pennsylvania, with more than 200 immigrants aboard, it sank offshore and lost three-fourths of the poor souls who were seeking a new life in America. It also lost hundreds of barrels of British and Irish half-pennies, some of which are still found today on what beachcombers call “Coin Beach.”

Clifton has detected his share of coins there, but another find was more exciting. He explains,” I found a gold brooch from the same wreck, cleaned it up and uncovered the name ‘Sarah Lee,’ a victim in the disaster. I recognized the passenger from the ship’s manifest and after further research, I located her great, great, great granddaughter. She didn’t live far away, so I visited her and gave her the brooch. It was an exciting and sentimental moment for both of us.” 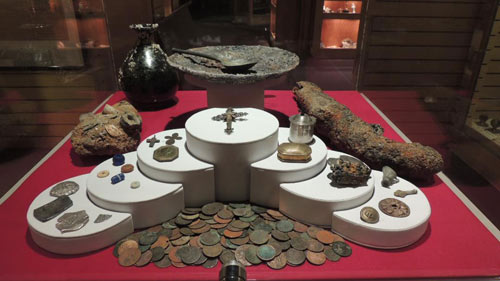 Coral encrusted pistol, cannonball, coins, a cross and other relics

Raised in Milton, Delaware, Clifton and his family live in Bethany Beach not far from work. His wife Lisa understands his love for history and treasure, but doesn’t join in the hunts. Son William, age 18, has his own teenage interests, but helps his father in electronic and digital imaging projects. Clifton was bitten by the treasure bug when his mother, a school librarian, brought home a copy of Treasure Island.  “I was 14 years old and it sparked my interest, so I got a metal detector,” he says. “But that wasn’t enough. I wanted to see beneath the sea and a friend helped me build a diving contraption that actually worked. The air came from a tire pump and functioned in shallow water. But at 30 feet, the glass in my mask shattered and cut my face. My mother grounded me and said, ‘If you want to do this, do it right!’ She gifted me scuba diving lessons for my 15th birthday.”

Artifacts from the Faithful Steward (exhibit on right), a merchant vessel sunk off the Delaware coast in 1875

Although diving is his first pleasure, Clifton loves to join archaeological teams excavating colonial and native American sites. When time allows, he slips over to Easton, Maryland, where a group is working on a lost colony circa 1640-1730. “Trading ships came to the colony and anchored in nearby fresh and brackish water which killed off teredo worms growing on the hull,” Clifton explains. “Trade helped the colony flourish, but the black plague wiped it out. We located the settlement after we found some tombstones. Some of them had children’s names and ages on them, one of the clues that signaled the plague.”

Clifton always finds coins on colonial sites. During a dig in Virginia, he found thousands of them in chests that slid into the marsh and harbor where a trading post once stood. They were of various denominations from England, France, Spain and other countries. Many nations at the time were phasing out their old coins and colonists were desperate for them. They smelted them down to make their own coins or to profit from the copper, bronze and silver they extracted. Adding to the story, Clifton reaches up and pulls down one of more than a dozen boxes of artifacts shelved in his lab. He grabs a bunch of coins and drops them in my hand. Some are dated 1790. 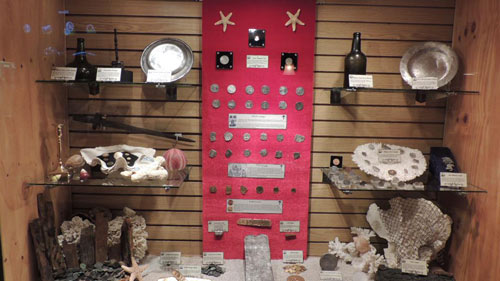 Artifacts on display from various sites

“Look up the Dutch East India Company when you get home,” he says. “These are copper pennies from a venture company founded in 1602 to trade with India and other Southeast Asian countries. It grew into a monopoly that controlled the economy in Europe and the East Indies in the 17th and 18th centuries. It’s growth and development as the world’s first national corporation is amazing. Check it out…it’s a great story.”

His stories reflect Clifton’s love of past events, or as he puts it, “shaking hands with history.” He points to the exhibits and says, “This has been my lifelong dream to restore and house all these discoveries. We have exhibits, but also hands on artifacts that everyone can enjoy. Kids especially love them. It’s like shaking hands with history. It’s my way of giving back and I hope I can encourage others to become as excited as I am, not just about treasure, but over the evolution of past events.”