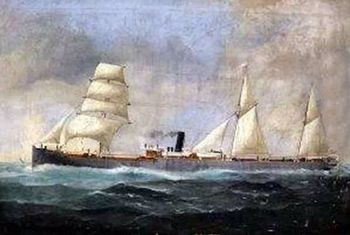 When Bonnie Buckler and John Santulli settled into a waterfront table for lunch at the Ocean Grill Restaurant, Vero Beach, Florida, they spotted a strange object offshore. It was only about a quarter of a mile away and at first appeared to be some sort of a marine creature. But it wasn’t moving and barely broke the surface, its shadowy outline looming in the clear blue water.

“That’s our ‘Boiler Wreck,’ the waitress said, “a well known seamark in this neck of the woods.” As she handed menus to the two Lutherville, Maryland, tourists she smiled and said, “Here, read all about it.” The whole story was right there on the menu reprinted from a 1974 article in the local Press Journal: “The Story of the British Steamer SS Breconshire or the Answer to Your Question, ‘What’s That Out There?’” 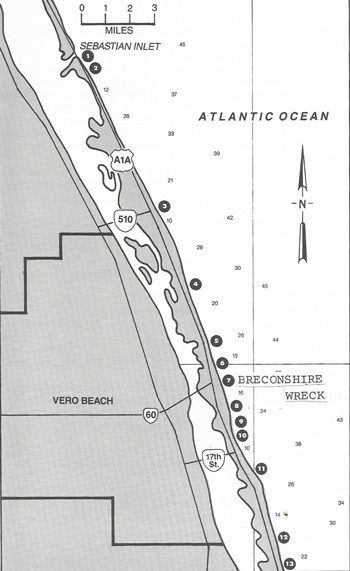 Built in Sunderland, England, 1833, the SS Breconshire was a schooner-rigged, steam/sailing vessel sunk off Vero Beach in 1894. The wreckage, scattered over the coral reef in 15 to 20 feet of water, is identified by its protruding boiler and homespun nickname. Capt. Robert Taylor commanded the 300-foot iron-hulled cargo vessel and its crew of 23 seamen and a second officer. An experienced skipper, Taylor carried a Master’s certificate for commendable seamanship and was highly regarded by his employers at Jenkins and Company, UK. One simple mistake, however, cost him his ship. Fortunately, the accident occurred near shore and all hands lived to tell the story.

The SS Breconshire, named for a historic county in South Wales, usually sailed a regular route: England to Mediterranean ports and then to New York. But in April, 1894, the captain received orders to pick up a general cargo in Tampa, Florida. Unfamiliar with Florida waters, he ordered a packet of charts for the state’s coastal waters, but erred by not opening it until the ship was three days out to sea. Unfortunately, the packet failed to include charts of the Florida coast for a 20 mile stretch south of Cape Canaveral.

On the night of April 29, Second Officer Edwin Curling was at the helm when lookouts mistook a “dark streak” off the starboard side as a weather change. It was instead, the dark shoreline with a series of coral reefs stretching seaward. When the ship struck the reef, the hull’s seams split, water poured in and the massive vessel sank in front of what is now the Ocean Grill. The captain and crew lowered the long boats and made it safely to shore. They were sheltered at a nearby coast guard station for three days before returning to London for a trial. A court of Her Majesty’s Justice of the Peace determined the casualty was “primary negligence” and suspended Taylor and Curling for six months. The ship’s value was estimated at $75,000. 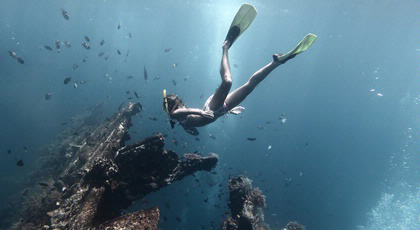 There aren’t many shipwrecks that divers have access to as easily as the Boiler Wreck. Snorkelers love it. It’s a short swim out to the site and on a good day, when visibility averages 10 to 20 feet, an abundance of marine life can be found. Although there’s little definition remaining, the ships engine parts, beams and machinery afford homes for lots of critters. The reef, one of four that run parallel to shore at various depths, provides further abodes for aquatic life.

Mutton snappers, easily recognized by the black spot between the lateral line and dorsal fin, school over patches of algae. Algae growth—resembling small clumps of seaweed—supports the reef and wreck’s ecosystem with a primary food supply. A variety of tropical fish thrive on the wreck and reef. Blue-head wrasse and their bright yellow juvenile offspring hover over their home of crisscrossing iron girders. The adults, not more than three to four inches long, vigorously defend their homes during mating season. The wreck’s feisty sergeant majors will do the same. French angelfish and blue-striped grunts cruise around wire stays once used to stabilize the ship’s masts and spars. 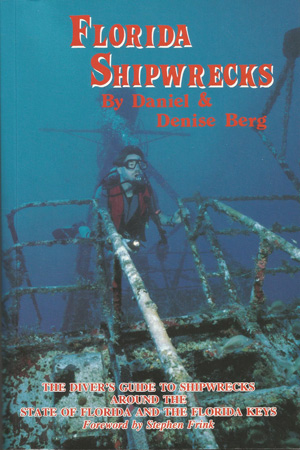 One of many books that tell the story of the SS Breconshire. Credit: Aqua Explorers Publications, East Rockaway, New York.

Divers might spot a moray eel sticking its head out from beneath a ledge. V-shaped feelers are telltale evidence of a lobster hiding in the shadows. Star coral clings to a half-buried hatch cover and sea plumes flourish on scattered hull plates. Stiff, flat blades of shoal grass grow in sandy patches where sting rays seek cover. It’s not uncommon to see a nurse shark or hawksbill turtle roving on the perimeter before disappearing in the haze.

For those who don’t want to venture from shore, local dive services host scuba divers and snorkelers on scheduled trips to the wreck. Diving is best in the summer when west winds flatten out the seas. Strong east winds reduce visibility. The Ocean Grill, Holiday Inn and The Boiler Wreck all converge at the east end of Route 60. Divers enjoy visiting the McLardy Treasure Museum located on Orchard Island, 13180 North A1A, five miles north of Vero Beach. Exhibits include treasure and artifacts from the 1715 Spanish galleon fleet sunk off Sebastian, Ft. Pierce and Vero Beach.

Did John and Bonnie, who spotted the boiler while lunching at the Ocean Grill, dive the wreck? No, they didn’t, but they told this writer about it. Research revealed it’s one of the Sunshine State’s oldest natural disaster shipwrecks still at the disposal of snorklers and scuba divers.