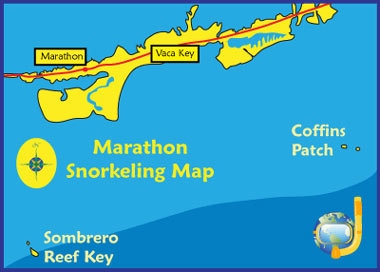 Coffins? That doesn’t sound too inviting does it? A conglomeration of coral reefs and sandy plains, Coffins Patch—six miles from Marathon, Florida, is a haven for shipwrecks. The reefs are “patchy,” hence the name, but where do the “coffins” come in? There’s a story of the diver who visited the area everyday for a week, searching for a ship that sank with a cargo of coffins in its hold. But the diver was quite disappointed when he learned this was just a rumor. Yet, it sounded good to tourists that boarded dive boats to go and see this ghostly named site. Another tale, this one possibly true, says that one of the many ships passing by the area could have at one time or other held a memorial for a deceased crewman and deep-sixed his coffin, naming the reef “Coffins Patch” before leaving. Regardless, there’s a group of believers who visit the site each Halloween night. This ritual first started with four or five divers and grew to over 20 at last count. 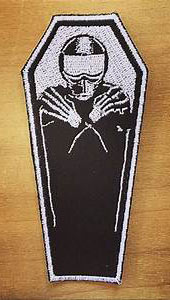 Coffins Patch might be scary when divers visit it on Halloween night. Credit: Florida Keys Tourism

The ship dumping the coffin could have been the Spanish treasure galleon San Ignacio, a crown jewel of wrecks in Coffins Patch. One of 21 ships leaving Havana, Cuba, July, 1733, it was part of the New Spain Fleet carrying all sorts of merchants’ goods and of course lots of treasure. It just happened to be Friday the 13th when the fleet ran into a violent hurricane that blew it off course and into shallow water where it got hung up on reefs that show no forgiveness to mariners. Remaining at the mercy of heavy seas and surf, the ships were pounded until they sank. When the San Ignacio broke up on Coffins Patch, all except 14 crew and passengers perished. The captain, Don Cristobal Urquijo, didn’t survive the disaster. Upon his death, it was revealed by a survivor that daring Don was bringing all of his accumulated wealth back home. His intent was to smuggle much of it past custom agents so he wouldn’t have to pay the 20 per cent tax to the king. After his scheme was revealed, big bad Don’s widow, claiming she was destitute, (which she wasn’t) had the nerve to hire a lawyer to petition the king for relief. It came to light that the captain was transporting 54,000 pesos, but claimed only 12,000 of them. This wasn’t unusual. Passengers, captains and crews of every fleet setting sail from the New World to Spain tried to beat the tax man. The Spanish salvaged a fair amount of the coins, but unintentionally left many behind for eager treasure hounds to find. Even today, coins turn up after heavy storms hit the area..

The captain and crew often hid their contraband beneath the ballast stones deep in the bowels of the ship. Wealthy merchants brought ordinary household items cast in silver or gold and claimed them as personal property, such as silver pitchers, forks, spoons and knives, candelabras, bowls and jewelry. When all of this washed overboard accompanied by gold and silver bars, discs and coins, it was possible to find some of them on land or in the sea. This fits perfectly with the adage, “Treasure Is Where You Find It.” 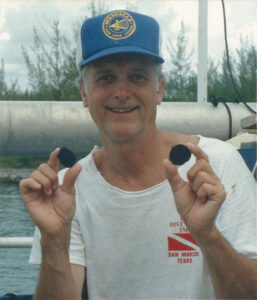 “Coffins Patch became a bonanza,” said the late Bob “Frogfoot”’ Weller who dove on the San Ignacio and other 1733 wrecks before he moved to Sebastian, Florida, to search for ships of the 1715 Fleet. The San Ignacio’s hull was beat up by storms over the years. She sank in 10 to 18 feet of water four miles offshore and lost her two top decks during a summer storm. As the ship broke up, her treasure created a scatter pattern miles long. Boxes of coins broke open creating a treasure trail that’s still followed today. Like the box of chocolates in the film, Forest Gump, “You never know what you’ll get.” In the late 1960s, salvor John Steffrey got 625 coins and a cutlass under a 13-foot high anchor embedded in the sand. His dive buddy, the late Chuck Mitchell, discovered pillar dollars (one side shows the Pillars of Hercules) dated 1732, some pieces of eight, five pewter plates and a pair of miniature pewter cannons weighing two pounds each. These “noon cannons,” were a phenomenal find. They were mounted at the helm and set to go off at 12 o’clock to remind the navigator to take the ship’s position The sun shone through a magnifying glass in order to fire the little cannons which created a loud blast for their size. They were so rare a find, Mitchell kept them in a special safe at his local bank. 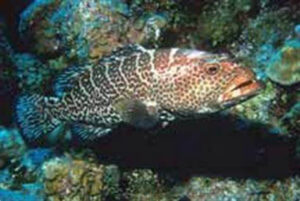 Divers should be aware that Coffins Patch has been declared a Sanctuary Preservation Area (SPA) which means look but don’t touch, take or disturb anything. Let the diver’s conscience be the judge as to whether or not to alert the state that it’s there. Depending on the denomination, it could be rare or perhaps the same as one of the thousands of coins retrieved by divers over the years. 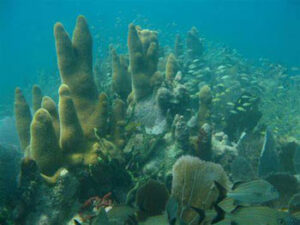 The fragmented Coffins Patch reefs remain prolific, drawing a variety of marine life. Throngs of fish surround the algae covered rocks, some of them residents and others visiting in search of a meal. Angelfish, tang, grunts, eels and barracuda are common as are stingrays, snapper, grouper and jacks all moving around the coral and wrecks. More wrecks abound from the 1733 fleet and those lost years later. The Adelaide Baker, a wooden-hulled cargo bark ran aground in 1869. Her remains are still there along with the 1733 payroll ship Frigate Situada and the Christmas Tree Wreck. These are just a few of many in the area. The latter was at one time a pile of cannon, anchors and ballast marked topside by green and red buoys. Salvor Dick Williams shouted after he put them out, “Hey, these buoys remind me of a Christmas Tree.” Little did he know that would be the site’s name from then on. No positive identification was ever made of it, leaving the name intact to this day.

There are many good books about all the Spanish fleets. One is Galleon Alley: The 1733 Spanish Treasure Fleets by Bob “Frogfoot” Weller. In one passage from his book he says: “Coffins Patch is a treasure diver’s dream come true.”

So there you have it: Coffins Patch. That wasn’t so scary after all, was it?