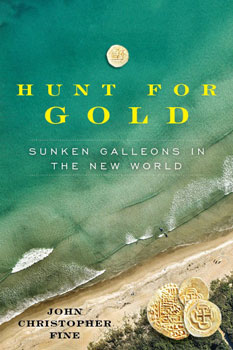 John Christopher fine is a busy man. He splits time between his horse farm in Gettysburg, Pennsylvania, and Boynton Beach, Florida, where he conducts coral reef research, lectures on Oceanography and teaches scuba diving. Being a marine biologist and an expert in maritime affairs, he writes about the current conditions of our oceans and seas. As a volunteer fireman, he has had little time for anything else, yet his friends kept reminding him that he should “write that treasure book.”‘

That was enough. After years of delay, John set his plough to the soil and followed its furrows to the end. He completed “Hunt for Gold: Sunken Galleons in the New World,” his 27th book which he authored or contributed the photos for publication. The Pineapple Press, Lanham, Maryland, will have Fine’s 252-page hardback, with more than 100 illustrations, ready to release in early 2023.

At first glance, the manuscript appeared to be all about the late Bob “Frogfoot” Weller, one of the most successful salvors on the Sunshine State’s treasure coast. Upon further review, I realized it IS about Weller—in memory of him—but includes other accomplished treasure hunters as well. It features Margaret Ann Weller too, a crackerjack salvor in her own right and member of the Weller search team. 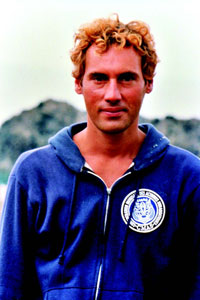 got his nickname from the style of swim fins used by the U.S. Navy Underwater Demolition Team (UDT) forerunner of today’s SEAL teams which he joined in one of two stints served in the Navy. Bob and his shipmates didn’t mind being called “Frogmen” and he relished his “Frogfoot” non de plume. The popular treasure hunter and guru to many wannabes, the frogman actually lived three lives: first a naval career, second, an award winning salesperson, and third the head of Crossed Anchors Salvage Company that he and Margaret started.

Weller served in the U.S. Navy in WWII and later the Korean conflict, earning a Purple Heart and Bronze Star. He completed the Navy’s V-12 officers’ training program (OCS) and leapfrogged from enlisted man to Lieutenant JG. Later, he graduated from the University of Delaware, majoring in architectural and civil engineering. With his naval duty behind him, Weller was hired by the Honeywell Corporation where he excelled in sales and marketing. Never idle, Frogfoot founded the Delaware Underwater Swim Club which is still active today. It was here that he spawned an interest in shipwrecks and began diving on them off the Delaware coast. 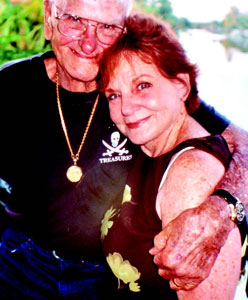 Bob “Frogfoot” Weller and his wife, Margaret, were partners in life and in their treasure quest. Credit: J.C.F

In the early 1960s, yearning for warm weather, the sailor now a civilian moved from Delaware to Miami, Florida, where he continued with the Honeywell Corporation and racked up a new yearly record for sales. To say 1970 was a banner year for making extraordinary discoveries would be superfluous. It was the year Frogfoot met Margaret Mathews who became Mrs. Robert Weller four years later. Both were divorced and Margaret was working in the gift shop at the Miami Serpentarium when he met her while selling replica Spanish treasure coins. Some of the coins were like the ones from the 1733 Spanish Plate Fleet. (“Plate” is “Plata” meaning silver in Spanish).

Twelve ships from the fleet sank over an 80 mile stretch of coastline off the Florida Keys. Silver coins and bars were listed on the ship’s manifest. Unlucky on Friday, July 13, the fleet failed in trying to return to Havana, Cuba, but four others made it back. Four more, sailing on the fringe of the hurricane, made it to Spain. There were survivors that camped on the beaches until salvage crews arrived to retrieve what they could with equipment of those times. More gold and silver from the sunken galleons was retrieved than listed on the manifests, telltale evidence of contraband often hidden below decks beneath the ballast stones. 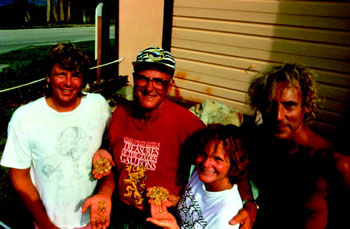 The author devotes chapters 3 and 10 to the 1733 Fleet and rightfully so since it, like the California gold rush, started get rich quick rumors. Divers flocked to the Keys in the pursuit of sunken treasure. It was “finder’s keepers” back then when no rigid state laws were in place. It was 1935 when a fisherman showed Art McKee, a local Marathon diver, a coin he found in his nets and suggested he take a look at the site. McKee looked, found more coins and became every treasure diver’s hero. He was known as the father and pioneer diver of the Keys and gathered enough artifacts, maps and photos to open a museum in Marathon where some of the exhibits came from the fisherman’s wreck, El Rubi, the Capitana or flagship of the fleet. 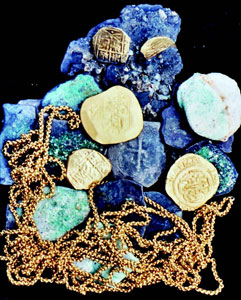 Most of the wrecks consisted of stone ballast piles and wooden planks that weren’t eaten by teredo worms. Scattered all along the coast in treasure trails, they are listed in the Archives of the Indies, Seville, Spain: San Pedro, Tres Puentes (Three Decks), El Populo, Chavez, San Francisco and San Ignacio, the latter sunk on Coffins Patch Reef near Marathon yielding 54,000 pesos (one peso equals one dollar). The fleet’s list goes on, the treasures consisting of gold coins, chains and bars, silver specie, and jewelry designed for the Queen of Spain.

Most of the sunken fleet was scattered about in shallow water on treasure trails that stretched for miles both north and south of Marathon. Many were just piles of ballast stones and chunks of dead coral covered with algae. These remains were similar to the ones Frogfoot would find on the wrecks further north around Vero Beach, Fort Pierce and Sebastian, where the Wellers moved to enjoy their third phase of life. Frogfoot left Honeywell after 10 years to become a fulltime salvor. Mr. and Mrs. Weller went hunting and their target was the 1715 Silver Plate Fleet, another hurricane victim. Eleven ships sank and now their remains are scattered all along the coastline from Ft. Pierce to Sebastian. Manifests of many of them were found in the Archives of the Indies, Seville, Spain, by top-notch researchers Jack Haskins, Lee Spence and Eugene Lyons. 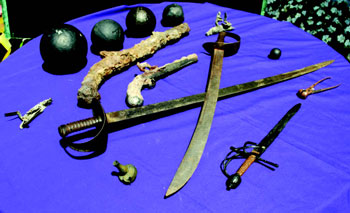 Many armaments were found on the sunken galleons. Credit: J.C.F.

After Frogfoot bought in on Mel Fisher’s lease, both agreeing to a 50-50 split, he purchased a boat, the Pandion (from Greek mythology) and outfitted it to his needs. A 24-foot workboat similar to the oyster and crab boats on the Chesapeake Bay, it was low to the water for easy diver access. It had an inboard engine, an overhead cover and a prop wash which was called a “mailbox” for its spacious, sheet metal design. Its elbow-shaped construction—actually looking like two mailboxes—covers the prop, creating a downward thrust of water that digs a hole in the sand. When the engine is cut, divers scan the excavated burrow with metal detectors to see what they’ve uncovered. 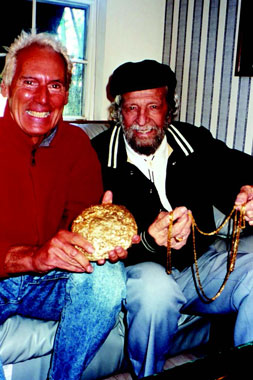 For years, the Weller Teams uncovered vast amounts of treasure, including lots of jewelry. The Cabin Wreck Site, named for a beachfront bungalow owned by Kip Wagner—one of the founders of the fleet—gave up a treasure trove. Regala was the galleon and the diver Chris James. The prized discovery was a gold brooch set with 177 diamonds. The same reef yielded a gold earring set with 54 diamonds. Bob Luyendyk found its match 12 feet away in 12 feet of water At day’s end, the team stockpiled 27 gold rings, two silver buckles, a candelabra and a piece of jewelry called a lazo which held 17 diamonds. Returning to the dock, Frogfoot announced to the press, “We think we found the ‘queen’s jewels.'” 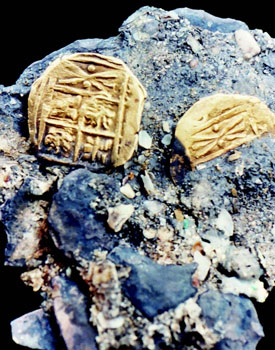 Gold coins were found lodged in the sand and rocks. Credit: J.C.F.

Another site on another day found the team over the Nieves wreck south of Sebastion Inlet. Dive conditions weren’t good. When the wind picked up, the seas got choppy. Yet Weller persisted and after spotting a glint of gold in one of the holes, he removed a chain he thought might be about three feet long. But as he pulled it out from the hole he realized his miscalculation when the 11 foot, 2 inch gold chain was measured aboard the Pandion. This amazing discovery made the NBC-TV news and many newspapers.

Margaret wasn’t about to be outdone. Anchored 200 feet off an old bathing beach, Bob & Margaret, working as a team, dawdled around some old mangrove tree stumps rising off the bottom. That’s when Margaret caught a glimpse of gold and recovered a Royal 4–escudo coin dated 1711 that was minted especially for the king. It brought $20,000 at auction. Many of these coins, which were like the diver’s Holy Grail, were placed on exhibit at the Fisher Treasure Museum in Sebastian before they went up for auction. Other artifacts were up too, such as armaments, rosaries, pottery, clay pipes, silver belt buckles, candle holders, golden toothpicks and much more. 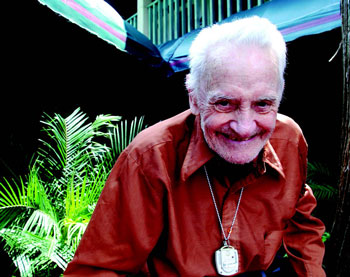 The late Jack Haskins could read the ancient Spanish script on the manifests at the Archives of the Indies, Seville, Spain. Credit: J.C.F.

This review is just the tip of the iceberg. More treasure is described along with the sites where it was found. Chapter 11, How to Find Sunken Treasure, is quite enlightening as is Chapter 12, The Spirit of Treasure Driving. The good and not so good, the trials and tribulations and the joys of discovery while searching for treasure are revealed by an author who actually went on some of these dives and experienced the thrill of it all.

About the Author: John Christopher Fine is not just an author and photographer. He still finds time to teach, lecture and keep up with all the organizations he has been associated with throughout the years. He follows CMAS, the French certification agency and remains a member in good standing of the Academy of Underwater Arts and Sciences and was a recipient of the John Stoneman Marine Environmental Award. He received the Accolade Medal created by the late Capt. Don Stewart of Bonaire for his environmental work and another award for 45 years as a PADI Master Scuba Instructor. John gives lectures on dive safety and environmental issues at schools, libraries and dive clubs. That John Christopher Fine would be labeled an “environmentalist” would be a feather in his cap. 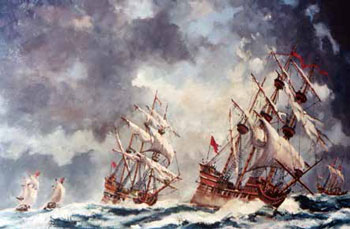 Spanish galleons faced rough waters, storms and hurricanes on their way back to Spain. Credit: J.C.F.

Note: Robert “Frogfoot” Weller passed over the bar October 13, 2008. Relatives, friends and admirers attended his memorial and spoke of their admiration for him. His best friend, Ernie Richards of Lake Worth, Florida, said, “Frogfoot was one of a kind. There aren’t a lot of adventurers like him around today. He was the kind of guy who made a good day even better.”