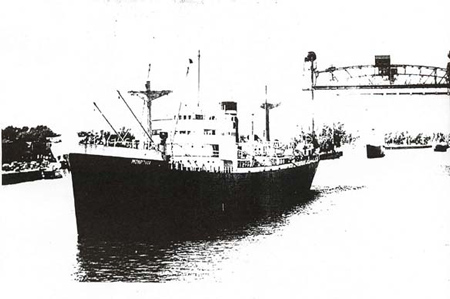 During the “Gusher Age,” 1900 to 1940, there appeared to be as many oil rigs in Texas as desert cactus. But what became a trillion dollar industry, with rigs around the world, the search for “black gold” created a frightening scenario when a construction worker yelled, “Fire in the well!” When an oil company’s own “roughnecks” couldn’t extinguish the blaze, word went out fast: “Call Red!” they cried.

This meant bringing in Paul N. “Red” Adair, a Texas blowout firefighter pioneer who became legendary worldwide using explosives to ex snuff out oil and gas well fires. Red seldom failed. He even got a ticker tape parade in New York City when celebrating his heroic deeds in battling some of the worst fires ever encountered on the planet. 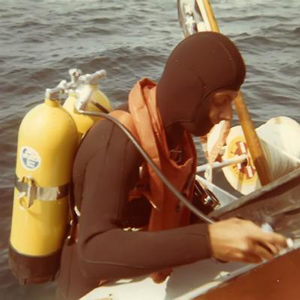 Gary Kosak records his dive after checking out one of his side scan sonar hits. Credit: Gary Kosak

Flash forward to another adventurer and entrepreneur, Gary Kosak, of Derry, New Hampshire. While Red earned the title, “King of Oil and Gas Rigging,” Gary became the “King of Side Scan Sonar. A “waterbug” raised around the Great Lakes, it was only fitting that he opt for a career in commercial diving. Ironically, of all places, it was around the oil rigs. But that wasn’t enough for this maritime Renaissance man. Through further studies and experience he became an expert in the field of side scan sonar. He started out working with another expert, Marty Klein of Klein Associates (now L-3 Klein) home based in Salem, New Hampshire. After more than 30 years, he went out on his own with GK Consulting and now operates under the banner of Edge Tech, West Wareham, Massachusetts. He still responds to “Call Gary” and travels the globe locating shipwrecks, airplanes, pipelines, military castoffs and other abandoned “stuff.” In between assignments, he finds time to train industry and military personnel in search and survey techniques. He has discovered and explored shipwrecks in all the Great Lakes. One of them, the SS Monrovia, is described as a “Forgotten Gem” by Undercurrents Newsletter. An ocean freighter, it was one of Gary’s first encounters in salvage at the outset of his diving career. 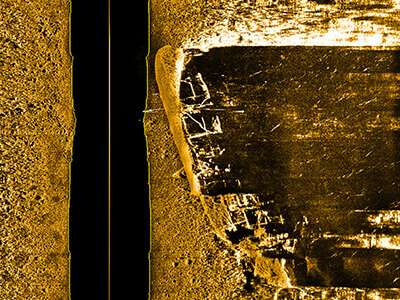 “It was a German salvage company’s operation and I was just a hired hand,” Gary explains. The hold was filled with heavy carbon bar steel used on construction sites. The wreck sits upright on the bottom, offering easy access to her holds and pilot house. It was 140 feet to the lake bottom and 130 feet to reach the bars packed in crates that had broken open and were scattered all over the place. It was amusing when the German divers made a contest out of which one of them could retrieve the most bars and earn a bonus from the captain. Even with lights, the hold was eerie and there were bottom time limits. The cold, dark water didn’t make the job easier and I had to get out of the way of the eager competitors.” 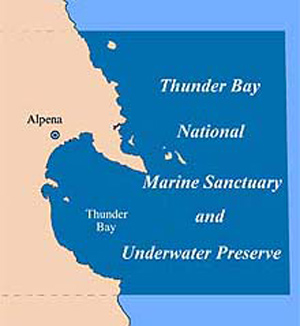 The SS Monrovia, recorded in Lloyd’s Register of Shipping as an “International Vessel,” saw 16 years of faithful service (1943-59) before being rammed in a dense fog by another freighter of the same size, the SS Royalton. An investigation revealed that both vessels were at fault for not following the “Rules of the Road at Sea.” There were no causalities. The 29 crewmen were rescued and taken to Alpena, where they caused quite a scene by demanding back pay before leaving. Registered in Liberia, the 432 foot, 7,076 ton ship had no company representatives around the Great Lakes, making it necessary for the money to be wired from Monrovia, Liberia, to Alpena. Michigan. Monrovia, the capital city of the West African country of Liberia, was named after U.S. President James Monroe who persuaded Congress in 1924 to contribute $10,000 to support colonization of the country. The SS Monrovia didn’t get its name until 1954. Others came before it. At launching in Scotland, 1943, it was the Empire Falstaff (English); renamed Commandant Mantled, 1945 (French), renamed Commandant Le Biboul, 1951, (French) and Monrovia, 1954, (Liberian) until she sank.

These ships and thousands of others sailed all over the world with varied cargoes such as military equipment, farm supplies, industrial machinery and construction materials. During wartime, the freighter captains always tried to tag along with a convoy for protection. During WWII, a vessel sailing alone was a sitting duck for German U-boats that often traveled in “wolf packs.” 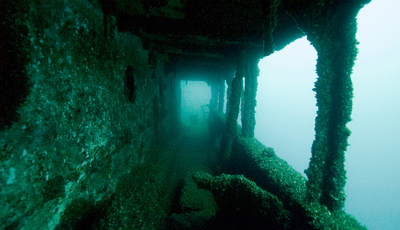 The Monrovia beckons to experienced divers, but medium depth certified ones can get a bird’s eye view of the masts at 90 feet and the pilot house at 110 feet. The house offers easy access but the cabins nearby are a tight squeeze. There’s a lot to see on deck, but everything is covered by invasive mussels that nibble on wood and iron. The filter feeding shellfish do offer a rare treat however. Visibility, which used to be seven to ten feet, is now 90 to 100 feet. Lake Huron has surpassed Lake Superior as the clearest of these “Inland Seas.”

The reason why the steamship is called the “Forgotten Gem” of the Great Lakes is due to its somewhat obscure northern location, compared to the 100 wrecks that are easier to reach in other parts of Thunder Bay. Those who’ve explored the site acclaim it for its size, vast holds, long passageways and history of having visited so many international ports during its 16 years of plying the seas.