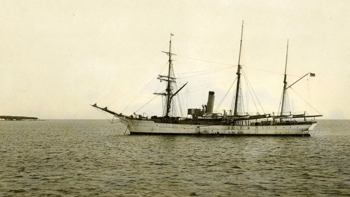 The press called the USS Bear a “storied” ship when its discovery was announced by the United States Coast Guard (USCG) at a waterfront news conference in Boston, October, 2021. The historic U.S. Revenue Cutter foundered in 1963, 260 miles east of Boston, while being towed from Nova Scotia, Canada, to Philadelphia, Pennsylvania. Its future as a restaurant and museum was dashed, but its heroic acts remain in maritime archives forever. Joe Hoyt, from the Office of Marine Sanctuaries, Washington, D.C., confirmed it when he said, “The Bear is considered one of the most historically significant ships in U.S. Coast Guard history and was already recorded and recognized as a historic sanctuary.” 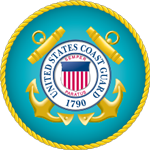 Sailing the seas for 88 years, the ship logged in dozens of memorable experiences, living up to the coast guard motto, Semper Paratus: Always Ready. It aided in the capture of one of Adolph Hitler’s spy boats and helped collar a Norwegian trawler that was messaging German U-boats in WWII; it captured seal poachers; rescued stranded Inuits from threatening icebergs; was part of Admiral Richard Byrd’s second Antarctic expedition in 1932 and aided whalers and other commercial fishing boats. It was at one time a museum, a Hollywood film set prop and assisted the U.S. Navy in both world wars. In addition to all of its accolades, the Bear earned further kudos for appointing Michael Healy as the first African-American to command a ship owned by the U.S. Government.

Born in 1839, Capt. Healy, a slave, was the son of an Irish born Georgia plantation owner and his common law Afro-American wife. Educated in the best Massachusetts schools, Healy never touted being black, perhaps to avoid the prejudice he might have encountered in his job and personal life. He ran a “tight ship” and was known as “Hell Roaring Mike,” an epithet referred to at the Boston press conference. It was ironic that at the same gathering, USCG sailors saluted him from aboard his namesake, the USS Healy, an icebreaker temporarily relieved of duty for this memorable ceremony. 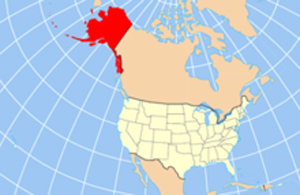 The Bear’s legend is so ingrained in USCG lore, its sports program at the U.S. Coast Guard Academy, New London, Connecticut, named their intercollegiate teams the “Bears” in honor of the ship that made a dramatic Alaskan rescue in 1897. Its roots go back to 1874 when the combined steam and sail powered barque (also called “bark”) was launched in Scotland and plied Newfoundland, Canada, waters for 10 years as a “sealer.” It brought in thousands of pelts yearly until the industry took a downturn. Sold to the U.S. Government in 1884, the Ship took part in the search for the Greely Expedition whose seven survivors were rescued at remote Cape Sabine, Nunavut, Canada. The double-hulled ship acted as an Alaskan icebreaker and enforcer for the U.S. Revenue Cutter Service, covering thousands of miles of coastline. Additional assignments had it chasing poachers, squashing illicit trade among native Alaskans and helping escaped slaves. In 1915 it was ferrying reindeer from Siberia to Alaska when the U.S Revenue Cutter Service merged with the U.S. Lifesaving Service to found the U.S Coast Guard. 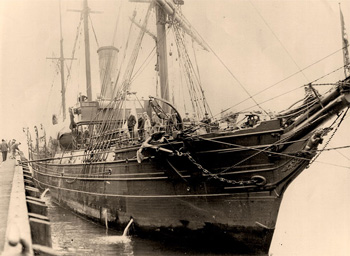 The 190-foot USS Bear was a sturdy double-hulled bark. Credit: Library of Congress

The majestic three masts, single funnel bark continued under Capt. Healy’s command, its long, sleek beam and 20,000 square feet of sail driving it to a top speed of 16 knots. Its keel, the backbone of square riggers, gave it stability and the perception that it was gliding through the water when under full sail. More of these ships were built than any other square riggers of the era. Decommissioned in 1944, it remained in Nova Scotia until its fatal end.

The public is generally unaware of the scale and scope of the coast guard’s missions. These and other operations can be found by viewing the online weekly series, “The Long Blue Line” hosted by military historian Dr. William Thiesen on the U.S. Coast Guard’s Compass Website. 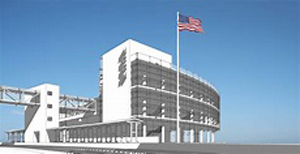 The strikingly beautiful, recently completed National Coast Guard Museum, New London, is another venue that pays homage to the service’s accomplishments. More than 200 galleries, exhibits and hands-on experiences bring to life the heroism, bravery and devotion to duty of those who have served and those who are currently active.