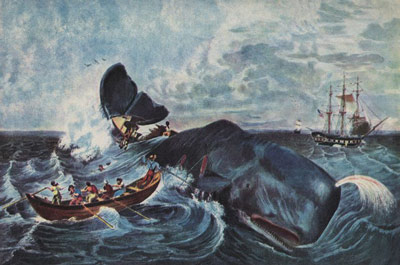 The present day discovery of a 207-year-old whaling vessel appears to have renewed interest in an industry that thrived in the 18th and 19th centuries. Kerosene was yet to be invented and oil extracted from “monsters of the deep” was in demand worldwide. About 15 years before author Herman Melville introduced the world to his captivating book, Moby Dick, the Industry was a Massachusetts whaling ship that sank near the mouth of the Mississippi River. The only whaler known to have gone down in the Gulf of Mexico, its presence remained a mystery. Whalers seldom left their northeast ports, avoiding southern waters for fear of enslavement of any of their crew that might have been Negroes. They, and other ethnic groups, were safe in New England, but not in southern waters such as Louisiana and Alabama.

It’s believed the Industry, built in 1815, was seeking new grounds for harpooning sperm whales, the favorite species of the whaling bunch in 1836, when it ran into a fierce storm and sank in 6,000 feet of water. Fortunately, another whaling ship was nearby and rescued all 15 men and returned them to New England. Dr. James Delgado, marine historian and archaeologist, said, “They were lucky. You can cruise the Gulf for many miles without seeing another vessel.” His age old whaler’s cue, “Thar she blows,” was fitting for letting the crew know he had spotted something interesting. In this case it was the profile of a wooden ship ravaged over the years by toredo worms.

Delgado heads SEARCH Inc., a survey team of the National Oceanic and Atmospheric Administration (NOAA) that seeks historical shipwrecks when it’s not assigned to other cultural heritage projects worldwide. His team of maritime sleuths, aboard the research vessel Okeanos Explorer, scanned the ocean floor 70 miles offshore from Pascagoula, Mississippi, in February, 2022. Strong lights on their remotely operated vehicles (ROVs) lit up the bottom revealing an outline of a 65-foot square-rigged brig. Old news clippings from the Nantucket Inquirer and Mirror featured the loss of the Industry in a fierce storm and the rescue of its crew by the Elizabeth, another whaler in the Gulf. The rescued men were returned to their home port in Westport, Massachusetts, where blacks were not enslaved. In addition to the wreck’s profile, Delgado’s photos showed anchors and a metal and brick tryworks which was a small furnace with iron kettles used to extract oil from the blubber of the whales. Rum and whisky bottles from the era were spotted along with some of the Industry’s hardware, but the ship’s nameplate wasn’t found. Nothing was salvaged at this time. 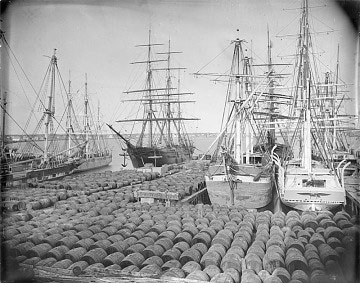 Whaling ships at dock, New Bedford, (circa 1800). Barrels of oil are on wharf. Credit: National Archives

The late 1700s through the mid1800s were heydays for the fishery (even though whales are mammals, it’s still called a fishery). Demand for illumination and lubrication were at all time highs. New Bedford was the “Whaling Capital of the World” in the “Golden Age of Whaling.” Fifty to sixty vessels of the hundreds plying New England waters could be found in port on stormy days. Intervals ashore provided time for family gatherings and socializing. Lazy days were filled with repairing gear, writing letters, home schooling or carving scrimshaw on whalebone. Most sailors didn’t care for women aboard ship. They believed females brought bad luck. Yet there were no complaints when the captain’s wife served homemade bread, pies and puddings to all hands. Some of the factory ship captains brought their families on voyages when they knew they would be away for years. 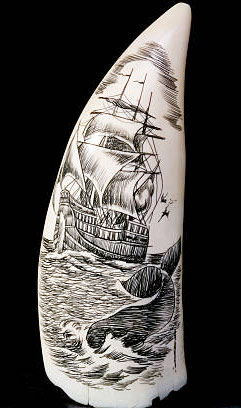 The fishery helped New Bedford, once a small town, develop into a thriving cultural and artistic city that catered to others who weren’t fishermen. But whaling had it s monetary days. Company owners and agents became millionaires. The fishermen were well paid and knew that a wounded whale always posed a threat. Death, injury or loss of their boat could come from battles with the Moby Dicks of the world. Good marksmen were in demand to strike the quarry with a harpoon fired from the whaleboat or the bow of the mother ship. Injured whales could, heaven forbid, end up on the bottom of the ocean. This became more prevalent when explosive heads were added to the harpoons.

Ships were usually brigs, barks and schooners, double-hulled for protection against ice and attacking whales. In Melville’s book, the story revolves around the obsessive quest of Capt. Ahab who sought revenge on a great white sperm whale that bit off his leg at the knee on a previous voyage. The Industry was small at 65 feet. Later, larger vessels appeared on the scene as factory ships processing the blubber (oil), whalebone (baleen) and spermaceti (special oil taken from the head of a sperm whale) used in manufacturing candles and cosmetics. Sperm, Right and Bowhead whales were special. As much as three tons of oil could be extracted from one 50-foot, 100-ton sperm whale. The largest one reported was a blue whale in the Antarctic estimated to be at least 190 tons. The meat was eaten mostly by the Japanese, Norwegians and Icelanders. Some people still eat it after arranged killings are permitted on over-stocked pods. 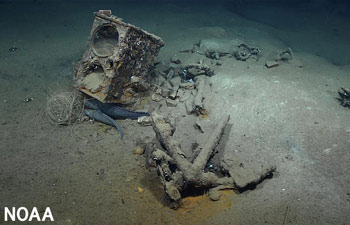 A newspaper clipping in the 1930s told it all when a caption read: “Kerosene Burns up Whaling Industry.” By then, the 50,000 whales killed annually (over-fished) were dwindling fast. John D. Rockefeller’s refineries were processing and shipping oil, kerosene and other petroleum products everywhere. Whale oil’s two major attributes: illumination and lubrication were replaced by of all things, modern technology.

Although Rockefeller did his part, it was the International Whaling Commission (IWC) that set quotas and finally, by 1982, banned commercial whaling. Eight species are considered endangered. Neither the IWC nor any of the other organizations that might have favored continuation of commercial whaling could come close to matching its third reason for collapse coined by Greenpeace, USA: “Elimination of the cruel, unnecessary and inhumane slaughter and butchering of one of the world’s greatest sea creatures.”

Note: Whaling enthusiasts must visit The New Bedford Whaling Museum, one of the finest marine museums in the country. New Bedford, Massachusetts.