No Knights at This Castle 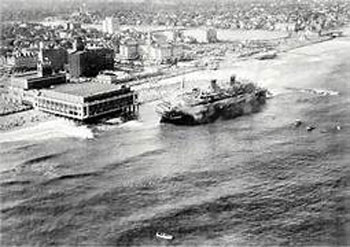 The Morro Castle ran aground on the beach at Asbury Park, New Jersey. Credit: New Jersey Tourist Board

There are lots of idioms floating around, some trite and others true, such as: “haste makes waste; fit as a fiddle, no pain no gain,” etc. The expression, “Bad things come in threes,” appeared years ago in the case of the SS Morro Castle, a ship whose story is one of the strangest in maritime history.

A luxurious, four year old passenger ship sailing from Havana, Cuba, to New York City, the “Castle” ran into a pending northeast storm off the Jersey shore on the morning of September 8, 1934. As the storm brewed, its captain, Robert Wilmot, suffered a heart attack and died while taking a bath. This was bad, but not as distressful as First Officer William Warms’ decision right after he took command of the ship. Learning that a fire had broken out in a storage locker over the reading and writing room of the promenade deck, he failed to send out an SOS. Meanwhile, flames from the fire spread quickly and storm winds increased. Black smoke erupted throughout the ship making the deck plates too hot to walk upon. Right after the radio operator sent out a distress signal, the ship lost power and the crew began lowering lifeboats for themselves. Only six of the twelve lifeboats were put overboard. Only a few of the crew tried to help the passengers as most of the “Knights” of the “Castle” were disappointments. 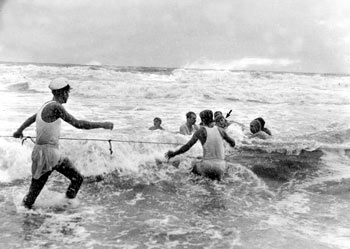 Passengers are rescued by the few crew that stayed behind to help. Credit: National Archives

When rescue ships arrived, many passengers had already given up. Fearful of suffocation and surrounded by smoke and heat, they leaped overboard. A total of 137 passengers and crew out of 549 aboard ship died. Four rescue vessels picked up those fortunate enough to survive. Now an ugly blackened fire victim, the Morro Castle, named after a fortress guarding the entrance to Havana Harbor, was abandoned by noon and drifted toward Atlantic City, New Jersey. Survivors were ushered to different parts of the Jersey shore where they received emergency medical care. The cause of the fire was never verified, but listed as “faulty electric circuitry.” Suspicion of arson by a crew member became a rumor. When the smoke finally cleared and bodies were counted, the vessel became a derelict, its foibles standing out like a sore thumb. It ended up foundering in the surf off Asbury Park, New Jersey, where thousands of tourists gathered on the beach to see the “Castle” being battered by the sea. Eventually declared an eyesore, the 480-foot-long pride of the Ward Line was towed to Baltimore, Maryland, and sold for scrap.

Inquiries following the disaster revealed many shortcomings such as the first officer’s handling of the ship, the crew’s response to the fire and the delay in calling for assistance. It appeared there was no organized effort by the officers to control the fire or close the fire doors. The crew made no effort to take their assigned fire stations. With a few exceptions, the crew failed to guide passengers to stairwells leading to the deck. The lifeboats that were launched made no effort to maneuver toward the ship’s stern to pick up additional survivors. 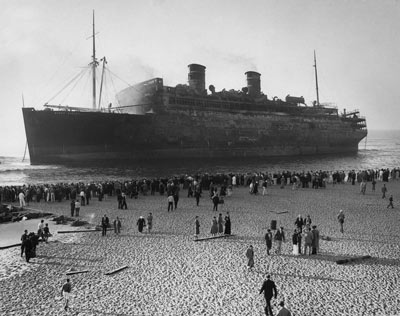 Thousands of tourists and locals gathered to see the ship foundering in the surf. Credit: National Archives

The first officer, now a newly promoted captain, never left the bridge to determine the extent of the damage and continued the ship’s bearing and speed after the fire was discovered. With power out, systems failed throughout the ship and no effort was made to use the emergency steering and lighting operation. Chief Radio Operator George Rogers acted responsibly when he sent a distress call without orders from the bridge. But records revealed this same responsible Rogers had been cited in the past with misconduct for fostering a vendetta and fighting with a shipmate. In a mid-1980s HBO television show, “Mystery of the Morro Castle,” John Goodman played George Rogers who was accused of setting the fire. Another show by A & E in 2002 blamed an unidentified crew member for the fire. Other theories included highly flammable, chemically treated blankets catching fire. Another possibility was one of the ship’s glowing hot funnels overheating and bursting with fire.

The court eventually indicted Warms, Chief Engineer Eban Abbott and Ward Line Vice-President Henry Cabaud on several charges including willful negligence. They received jail sentences, but an appeals court later overturned Warms’ and Abbott’s convictions. Survivors of the tragedy who attended the trials laughed when the court determined that some of the blame could be attributed to Capt. Wilmot (“Dead men tell no tales”).

When the inquiries ended on March 27, 1937, a federal judge affixed liability at $890,000, an average of $2,225 per victim. About half the claims were for deaths. The order barred further claims against the steamship company and the Agwi Navigation Company, operators of the vessel. As each claim was decided individually, damages were fixed under the Death on the High Seas Act.

Congressional hearings that followed the wave of adversity led to the adoption of more stringent regulations for United States flag ships and a major role in an international alliance named SOLAS—Safety of Life at Sea. (“Something good comes from something bad”)

Note: An entire room full of photos and artifacts is dedicated to the Morro Castle at the New Jersey Maritime Museum, Beach Haven, New Jersey, (NJmaritimemuseum.org). For further information read: “When the Dancing Stopped—the Real Story of the Morro Castle Disaster” and the “Deadly Wake” by Brian Hicks and Inferno at Sea by Deborah Whitcraft and Gretchen Coyle.