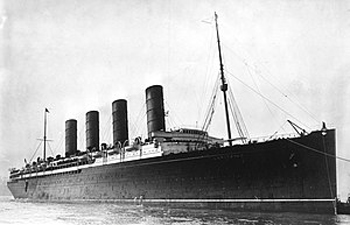 The 787-foot-long RMS Lusitania was compared to the HMS Titanic for her streamlined hull, multiple decks and four towering funnels. Credit: National Archives

When a ship sinks, there’s usually lots of mass media hype that eventually calms down and becomes simple maritime history. But sometimes the vessel sails back into the limelight as disputes arise. Insurance companies for instance may claim the shipwreck from salvors or they might renege on payment to the owners. If a captain survives, he could be questioned for a bad decision which led to the tragedy. Or perhaps the age and construction of the vessel might encourage lawsuits from passengers. Although it’s rare, political posturing remains a possibility tossed in with the other issues. It surely played its role on the world stage, May 7, 1915, when the U-20 of the Imperial German Navy U-boat Fleet sank the RMS Lusitania off the coast of Ireland.

The magnificent ocean liner, named after a Roman province in Western Europe, now Portugal, was compared to the HMS Titanic for its streamlined hull, numerous passenger decks and four towering funnels. Some of the crews called her “Lucy” or “Two Grand” since she carried a little over 2,000 passengers and 800 crew housed within a deluxe interior which was copied later by other lines. One hundred and twenty eight Americans were among the 517 victims in the disaster. Headlines in newspapers added fuel to the fire started by war mongers, some of whom were former pacifists. 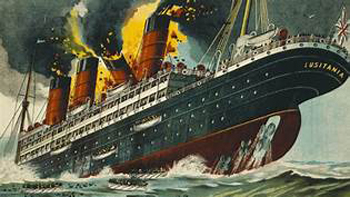 The Lusitainia sank in 300 feet of water after being struck by a German U-boat torpedo, May 7, 1915. Credit: National Archives

President Woodrow Wilson was a liberal, progressive democrat who served first as a professor and then president of Princeton University, Princeton, New Jersey. His next step was governor of New Jersey, 1912-1913, before he was elected the 28th president of the United States. He was the only U.S. president to earn a Ph.D. (Political Science, Johns Hopkins University, Baltimore, Maryland). His mantra: “Make the world safe for democracy” was applauded by those who helped keep the country out of war. This went hand in hand with his continued efforts to maintain a strong central government that favored domestic issues and affairs. It all boiled down to “a resolutely neutral” anti-war stance that held up from the beginning of the war in 1915 until the U.S. entry in 1917. 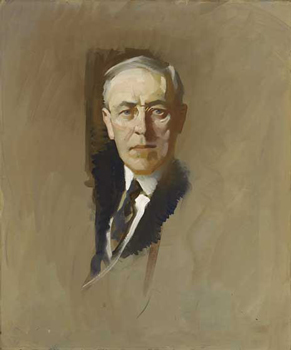 Woodrow Wilson, the 28th President of the United States, was in office when the Lusitania was sunk by a Germain U-boat May, 1915.. Credit: National Archives

After Congress granted Wilson’s request for a declaration of war, he asked for a U.S. army military draft, increased taxes for military spending to the Allies and increased agricultural and industrial production. He referred to the U.S. as “championing the fundamental rights of the war.” The Declaration of War by the U.S. against Germany passed Congress with strong bipartisan majorities. As fighting continued on all fronts and at sea, journalists referred to the conflict as “The Great War.”

The Lusitania was on its regular round trip run, New York to Liverpool, when a single torpedo struck it near the bow. At first the captain thought it was a second torpedo going off, but it wasn’t uncommon for a boiler to explode aboard the steamships of those days. Some of the military historians who studied writings from a book, “The Theories of War,” saw the attack as a sneaky act of evil and transgressions against the conventions of war. Others sided with Germany which warned all neutral nations to stay out of the shipping lanes in their designated maritime war zone. British ships were considered “enemy vessels.” Some warfare students considered the sinking a turning point in the history of modern warfare. They said it signaled the end of the “gentlemanly” war practices of the 19th century and the beginning of “a more ominous and vicious era of total warfare on land and sea.” 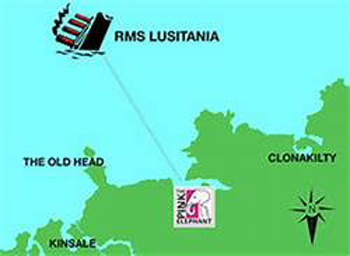 The “Grand Lady of Cunard” sank in 18 minutes, coming to rest on its starboard side in 300 feet of water. That’s more then double the depth limit recommended for recreational divers. Deep waters call for “tech divers,” those with additional experience, special certification and additional gear. They come from Ireland and other places worldwide to explore the “Mount Everest of Diving.” But they must sign up ahead of time with the Liverpool War Risk Insurance Association (regulated by the Irish Ministry & British government) and show a permission slip from the owner of the wreck. These organizations handled covenants on the wreck until 1967 when the ship was sold by the Liverpool and London War Risks Association and Irish Ministry to former U.S. Navy diver John Light. A year later, Santa Fe, New Mexico, venture capitalist Greg Bemis became co-owner with plans to salvage the copper and bronze cargo and valuable artifacts still aboard the opulent liner. He was also curious about the second explosion, a controversy that branded the Lucy a “mystery ship” in international publications. Speculators had one of three choices for the second explosion: it could have been a second torpedo, or one of the ship’s own boilers, or smuggled illegal munitions. 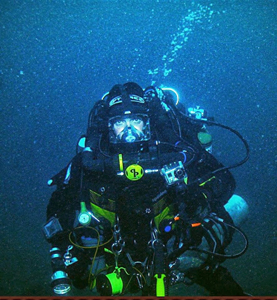 There have been various expeditions to the wreck throughout the years, several of which found contraband boxes of ammunition and rifle bullets scattered in the debris. Just like the Titanic and Andrea Doria, rusticles are forming on deteriorating metal and weak supports have given in to a collapsing superstructure. Divers may find all the information they need by visiting dive shops in Cork. There are many rules and regulations, especially against the removal of artifacts. The vessel has been listed in the National Register of Historic Places since 1995 and nothing can be removed without special owner, museum or government permission.

The dive conditions aren’t always the best. They vary when currents sweep through the wreckage and stir up sediment. Average visibility is 25 feet, but strong underwater lights are necessary to reveal marine life that rests in nooks and crannies. Varieties of small fish hover over artifacts, some identifiable and others a mystery. A close-up shot in a U-tube video reveals silt covered personal items such as a comb, brush, mirror and soap holder. A strong beam on the camera illuminates two badminton rackets, a golf club, a tennis ball and a birdie. Personal effects, nautical instruments, stairwell signs, ropes, ladders, cables, trappings, dregs and rubble are scattered all along the Lucy’s stem to stern 787 foot-long path. 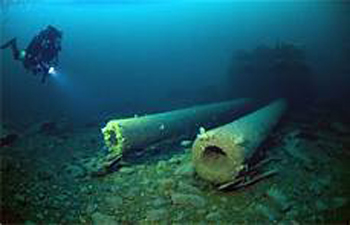 The liner is breaking apart but still maintains global significance when students study maritime history. It became a political football in wartime and even to this day occasionally breaks back into the peacetime news. Law suits between the owners and the government are common. Disagreements over artifacts, wartime grave sites and ownership prevail. But it’s like Greg Bemis said after his first dive on the wreck: “I finally said, ‘Damnit, it’s my ship and I’m going to dive it and give it a big hug and kiss. It’s beautiful down there. You’re weightless like the astronauts and you’re swimming around in a mystical and somewhat ghostly environment. I wish more people could experience it.’”