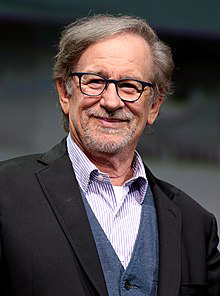 Producer, director and writer Steven Spielberg placed the SS Cotopaxie in the Gobi Desert in one of his Sci-fi films. Credit; Universal Studios

When American film director, producer and screen writer Steven Spielberg used the name of an authentic shipwreck in one of his award winning films, he opened a puzzling can of worms. The three time academy award winner took the name of a real shipwreck: the SS Cotopaxi and made it a focus of interest in his 1977 Sci-fi hit, “Close Encounters of the Third Kind.” A major subject in the plot, the ship was found in the Gobi Desert abandoned by extraterrestrials. Scoffed at by legitimate researchers, the small coastal freighter (253 feet long) nevertheless—thanks to Spielberg—became a “ghost ship” of legends, memoirs and myths.

Truth is the Cotopaxi, named after a volcano in Ecuador, was lost in a fierce storm off St. Augustine, Florida, December 1, 1925. It was one of 17 Emergency Fleet Corporation steamships built in 1918 to carry supplies to our troops during WWI. Unfortunately, by the time the supply ship was launched and sailing, the war was over and it became one of the peacetime fleet of the U.S. Merchant Marine Service. Designated a “bulk carrier,” it was transporting 3,800 tons of coal from Charleston,South Carolina to Havana, Cuba, when it foundered 35 miles off the Florida coast. Its ship to shore mayday message, “in distress,” which went directly to a station in Jacksonville, Florida, was never acknowledged. Actual records today show the date the ship sank and its location. It had been at sea for two days before the storm hit, taking the lives of its captain and all 31 of his crew. There were no survivors and no other ships at sea received the message from the stricken ship. No wreckage, lifeboats or personal belongings ever washed ashore. 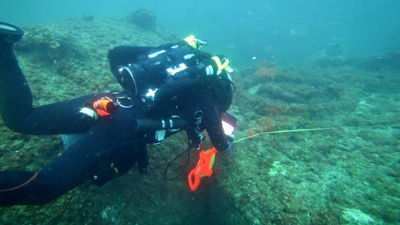 The strange circumstances revived the myth, launching Spielberg’s bogus ghost ship again. Adding fuel to the growing lot of Cotopaxi inaccuracies was the addition of the Bermuda Triangle, often referred to as the Devil’s Triangle. A region in the western part of the North Atlantic Ocean where aircraft and ships are said to have disappeared under mysterious circumstances, it is dismissed by reputable researchers. Yet its supernatural concepts fall comfortably into Spielberg’s style of fright. Ironically, the Bermuda Triangle myth didn’t even exist when the Cotopaxi went missing. Florida diver Michael Burnette says, “The thing about the Bermuda Triangle theory is if you look at it on a map, many ships attributed to it aren’t even in its boundaries. In my opinion, it’s total rubbish.”

Burnette has the experience and credentials to back up his convictions. He has collaborated in identifying more than two dozen Florida shipwrecks including the tanker, Pan Massachusetts, the steamer Peconic and the luxury yacht Nohab. A St. Petersburg, Florida, resident for over 20 years, Burnette’s work is highly regarded at the National Fisheries Institute, where he serves as a marine biologist. He heads two programs, one designed to save and protect sea turtles and another one to investigate a newly discovered species of coral. After years of contemplating the fate of the Cotopaxi, he dug in as deeply as he could and formed a conclusion in February, 2020, of what happened to Spielberg’s ghost ship nearly 100 years ago. 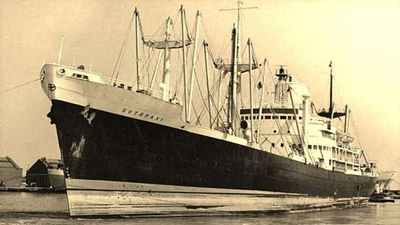 The SS Cotopaxie disappeared without a trace off Florida shores in 1925. Credit: Mariner’s Museum

With help from British maritime historian Guy Walters, Burnette discovered records from the ship’s insurance broker, Lloyd’s of London, which included the distress message and location that was originally sent to Jacksonville. This location wasn’t too far from a St. Augustine shipwreck site locals called the “Bear Wreck.” Officials at the St. Augustine Lighthouse and Maritime Museum, along with local diver Al Perkins, confirmed a theory Burnette had harbored all along. Could this wreck be the Cotopaxi? Perkins had explored the wreck many times since it was discovered in 1985, but among the artifacts he recovered, none offered the hard evidence needed to identify it. Divers sought the ship’s bell, but none was found nor did anyone discover where the name, Bear Wreck, came from. Perkins has a steam valve and a piece of pottery with American manufacturers’ names on them, but the shipwreck detectives needed more than that. 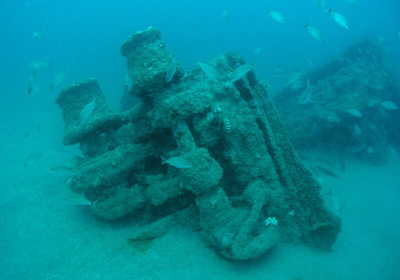 A windless, broken free from the bow, sits alone on the sandy bottom. Credit: Science News

Burnette made dives with Perkins and buddy Joe Citelli, taking measurements of the Bear Wreck to compare with the coal carrier. They made a video and exchanged their findings with Chuck Meide, Brandon Burke and Joe Kistel, members of the Lighthouse Archaeological Maritime Program (LAMP) based at the museum. The program’s role in investigating and interpreting the maritime history of the nation’s oldest city includes the large number of shipwrecks off the shores of the Sunshine State. The Internet’s Google site, Shipwreck Video of the Cotopaxi, gives a good idea of what everything looks like including the vast abundance of marine life. Although much of what remains of the wreck resembles a junkyard, the bow is discernible, the stern sanded in. Bulkheads, ribs, decks and railings abound,. An engine aft, resting not far from masts, chains and hatches, offers more definition to the wreck. A windless, broken free from the bow, sits alone on the sandy bottom. The marine life, attracted by the warm, clear waters of the Gulf Stream, swarms on the bottom at 100 feet. A mix of tropical fish mingle with schools of grunt, spadefish and amberjack that cruise the site’s perimeter. Goliath grouper and a nurse shark reside in the shadows beneath steel bulkheads. Hawksbill turtles, great barracuda and dog snappers appear, and then vanish as quickly as they arrived. It’s all captured by marine photographer Adrienne whose videos convey the sensation of actually being there.

His research, mapping, measuring and exploration complete, Burnette is convinced the Bear Wreck is the SS Cotopaxi. Everyone involved agrees and the mystery, instigated by a Hollywood blockbuster film, is finally solved. Burnette concluded, “A lot of times these discoveries are very emotional, especially when you get the feeling that your theory is correct. It’s an emotional rollercoaster as you realize this is the final resting place of a captain and his crew that went down with their ship. There are still a few relatives remaining that we are reaching out to in hopes of giving closure to their long and arduous delay to discover the truth.”