Lake George, a 32-mile-long by two-miles-wide body of water an hour’s drive north of Albany, New York, is an unlikely spot to find the oldest intact warship in North America. But history buffs know all about the roll this radeau, (a French word for raft) played in the French and Indian War, 1755-1763. Many radeaux and bateaux (smaller sloops) helped the British defeat the French in battles on Lake George that gave the Crown victory and saved us from speaking French for the rest of our lives. The British called it the Seven Years War. We called it the French and Indian War. 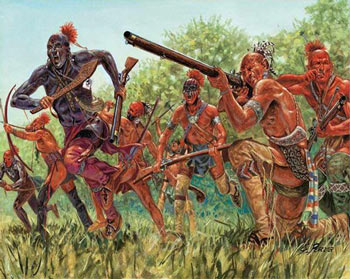 Many Indian tribes inhabited large tracts of land located between the French and British colonies. Britain enlisted support from the Iroquois and Mohicans, while France welcomed the Huron and Cherokee. Many other tribes joined up including the Ottawa, Shawnee, Chippewa and Wyandot. England and France were empire builders who sought control over the major portion of North America. The Indians had to make a decision as to which country would treat them humanely and allow them to remain on the land and utilize the many natural resources it offered.

Long and narrow Lake George, known as the Queen of American Lakes, sits at the base of the Adirondack Mountains within the upper region of the Great Appalachian Valley. It drains northward into Lake Champlain and the St. Lawrence River basin. Although Quebec and the Ohio River Valley were primary battlegrounds, so were Lakes Champlain, George and other waterways. It’s said that soldiers preferred the many battles on the water to trudging through roadless mountainous terrain. 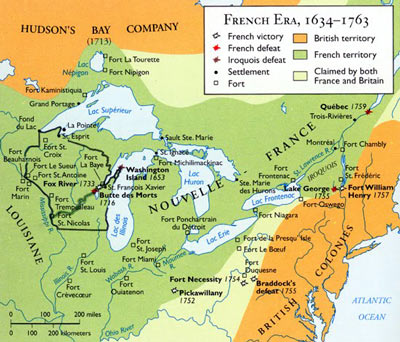 After a string of early French victories, the war turned in Britain’s favor in 1755 at the Battle of Lake George. Radeaux and bateaux brought supplies to the 1,500 troops and 200 Mohawk warriors that were defending their forts or attacking enemy installations on the shores of the lake. The French also had 1,500 troops, but couldn’t penetrate the English forts or match their tenacity in lakeside skirmishes.

The British and their colonial and Indian comrades lost a big battle in 1758 when they attacked Fort Carillon (later named Fort Ticonderoga) on Lake Champlain near the northern section of Lake George. In the battle, 4,000 French troops repelled 10,000 foes to maintain control over the Great Appalachian Valley. The British returned the following year and captured the under-manned fort, which allowed access to both Canada and the Hudson River Valley. This fort saw more action during the French and Indian War than any others. Thus Lakes George and Champlain became the strategic watery battleground for hundreds of bateaux and radeaux. 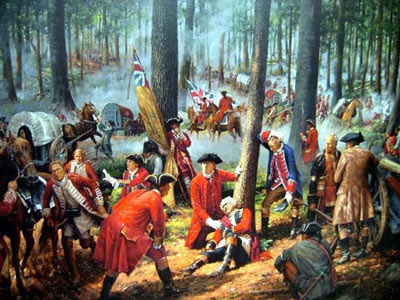 A British soldier is wounded in a battle on the Lake George shoreline. Credit: Lake George Tourism

Double the length of her counterpart the badeau, the 52-foot-long radeau had two masts, seven cannon ports and 26 oar holes. It could be sailed or rowed and tied up dockside by metal mooring rings. One of the radeau was aptly named Land Tortoise. The design of all these warships resembled turtles, covered over so as not to reveal anything on deck including the gun batteries.

In the winter of 1758, the English ships were intentionally sunk in shallow water in order to protect them from the enemy for the 1759 campaign. Most of the fleet was raised in the spring of 1759, except for the Land Tortoise which was never found nor mentioned in any war records. In 1990, the more than 200 year old mystery unraveled when archaeologists, using side scan sonar, discovered the wreck one and a half miles from shore in 105 feet of water. It’s believed the vessel slid, perhaps during a storm, from the shallows to the deep part of the lake. 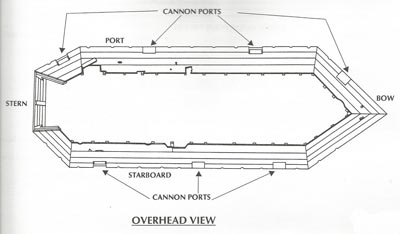 The wreck is well preserved in the oligotropic waters (fresh with low nutrients, little algae, oxygen enriched). Visibility averages 10 to 20 feet. Although the lake waters are clear, sunlight doesn’t penetrate well this deep. The masts are gone. There’s no rigging nor armaments. All of the equipment was to be replaced when the ship was pulled out of the water. For divers, there’s no penetration, but most are amazed at the well preserved hull which offers decent photographs taken at close range. The radeau, along with the other shipwrecks in the Lake George Preserve are protected by law. Anyone interested in obtaining a permit and a time slot to dive the wreck may obtain information online by going to: The Land Tortoise Underwater Preserve Site. Only experienced, certified divers are accepted. 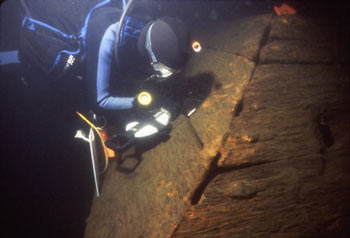 Today, the French and Indian War is glossed over in many history books. It’s not as popular as the Revolutionary or Civil Wars, so our children learn less about it despite its immense importance in securing our future as an English speaking nation.