The Blockade Runners: ‘Catch Me If You Can!’: Part III 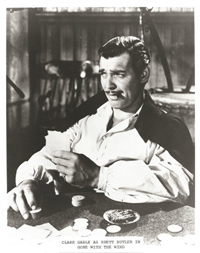 Clark Gable, as Rhett Butler in Gone With the Wind, was the captain of a blockade runner. Credit: Paramount Pictures

When President Abraham Lincoln proclaimed a blockade of Confederate ports during the Civil War, April 19, 1861, he launched the “cat and mouse” war games in which ships were hellbent on outsmarting each other. Painted the color of a Hatteras fog to remain inconspicuous, while burning smokeless anthracite coal, a long, low “greyhound of the sea” could lose herself against a wooded shoreline. Then, like a rabbit from the bush, she would make her final dash for a protected harbor. They were smugglers, these sleek, fast vessels that bootlegged everything imaginable for war and everyday living—goods not manufactured in the agricultural South and no longer available from the North. Wealthy entrepreneurs provided evasive craft and able skippers (Capt. Rhett Butler, played by Clark Gable in the fiction novel Gone With the Wind, was one of them) that etched a reckless, quixotic chapter in U.S. history. Close to 8,000 trips were made by a fleet of 1,650 runners smuggling 600,000 small arms and tons of general stores into the confederacy. But not all of them made it. By war’s end more than 1,000 ships were captured, sunk or destroyed. 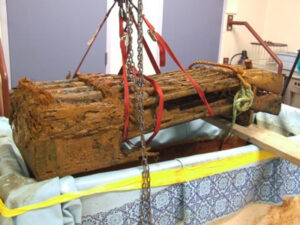 A crate of Enfield rifles goes in for a preservation bath. Records show that 1,700 of them were recovered from the blockade runner Modern Greece. Credit: North Carolina DNCR

The Modern Greece was one of the largest vessels to attempt a run and one of the first to be intercepted by a Union gunboat, June, 1862. She never reached Wilmington, the principal port for blockade runners. The captain beached her in shallow water near the Cape Fear River where a small portion of guns and goods were unloaded. In 1963, U.S. Navy divers salvaged over 10,000 artifacts from the wreck, including l,700 Enfield rifles, crates of mini balls, cannons, knives, tools, tin ingots and more. Five years later, Dr. Charles Perry, head of Underwater Archaeological Associates—a Carolinas conservancy group— and his team retrieved over 4,000 additional items from the ship that’s wrecked in 25 feet of water, 1,000 yards from shore. Perry’s non-profit organization worked under a state permit issued by the North Carolina Department of Cultural Resources.

David Smithey of Carolina Beach Scuba Shop, 15 miles from Wilmington, says, “They’re out there, the Ranger, Peterhoff, Ella, Venus, Modern Greece and many more. Part of the General Beauregard stick out of the water at low tide.” Dive shops stress that it’s “look but don’t touch.” North Carolina legislators approved of the Abandoned Shipwrecks Act of 1987 that gives the state possession of ships sunk within three miles of the shoreline.

The beautiful side-wheeler Lynx, nicknamed “glamour girl of the sea,” lived up to her name. Like the lynx, a wildcat flirting with danger, she furtively “ran the blockade” while smuggling guns, machinery and raw materials into Wilmington. But while 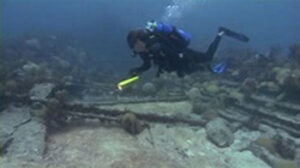 heading out of the port, bound for Bermuda with a load of cotton and $50,000 worth of gold—payment for past cargoes—she was sighted by three Union warships, the Howquah, Niphon and Buckingham. Soon the spider and the fly, fox and hound game began. The Confederate ship was so fast, she almost succeeded in running between the Union ships and back out to sea. Confederate gunfire from shore helped a little bit, but not enough. The Howquah fired two percussion shells from 30-pounder rifles, one striking the ship’s paddle box and the second damaging the forward structure. The Niphon delivered several broadsides below the waterline, forcing the Lynx to turn back toward shore where she ran aground near Half Moon Battery, five miles above Ft. Fisher. The Howquah, with an injured sailor struck by a bullet, abandoned pursuit and sought a surgeon aboard the Buckingham. Most of the gold and some of the cotton was salvaged before the Lynx burned and sank in shallow water near Half Moon Battery. 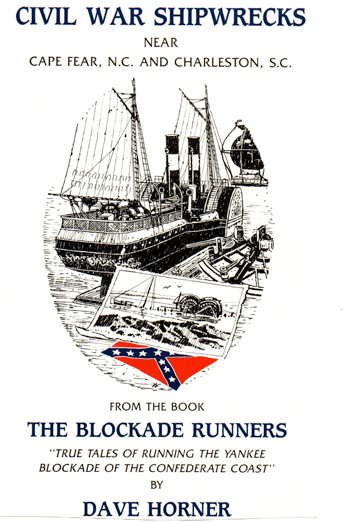 The Blockade Runners by Dave Horner is one of the best books written about the sleek, fast Confederate ships. Credit: Dave Horner

The Lynx and scores of other blockade runners remain historic time capsules sunk in the Graveyard of the Atlantic. They lie on the shifting sands of a bending coastline and the treacherous shoals of Cape Fear. Exploring them is no picnic. Currents, sediment and sometimes zero visibility discourage some divers, but those truly interested in history labor on. The Condor is a popular site lying 700 yards off Kure Beach in 25 feet of water. Much of the wreck remains including her paddle wheels, engine and parts of the superstructure scattered across the bottom.

Those who have been fortunate enough to work with conservancy groups have helped foster unity and cooperation among blockade runner history buffs and museum officials. That’s where the blockade runners sail again—in the many museums that harbor their narratives and artifacts. Moreover, they live in the hearts of those who seek to restore the heritage that will forever belong to Old Dixie.