Graveyard of the Atlantic: Part I Submarines 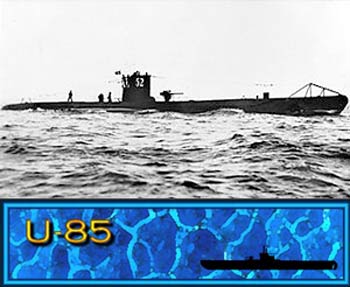 Those who will not venture out into the open sea pay the penalty of never having looked into the bright eyes of danger and at best they know but half of life. The mariners who went down with their ships encountered life headlong and lived it to its fullest blazing a path of glory before them. From the days of earliest New World expeditions, many knew about the Graveyard of the Atlantic and approached it with mixed feelings. Some flaunted it while others feared it, yet they persisted in risking their vessels and lives in its treacherous waters. Some tried to avoid it when venturing into the open sea. Others had no choice as currents, storms and economics brought them to the delicate barrier islands off the North Carolina coast where their journey ended suddenly and unexpectedly. Today, explorers follow that path of glory leading toward the silent depths of the Graveyard of the Atlantic—a quiet place wherein to sleep. 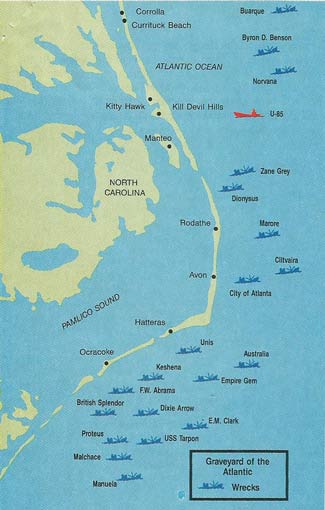 The U-85 was sunk by the USS Roper off Kill Devil Hills. There were no survivors. Credit: North Carolina Dept. of Tourism

More than 2,000 shipwrecks, entrenched in the cold embraces of a watery tomb, comprise the morbid but enticing Graveyard, North Carolina’s claim to some of the finest diving and fishing in North America. Extending from Knotts Island on the north to Sunset Beach on the south, this 250 mile stretch of water continues to draw more visitors yearly. With bold names such as Cape Fear, Cape Lookout, Swash Inlet and Kill Devil Hills, the curving shoreline is broken up by inland threats such as straits, sounds and bights. Offshore, the Graveyard remains perpetually guarded by the shifting sands of the perilous outer banks. Cape Hatteras, northernmost of the three Carolina capes, extends its shoal waters seaward into a junction were cold Labrador currents meet warm Gulf Stream eddies. Visitors can stand on shore on a stormy day and watch 100-foot sprays spuming skyward, the result of the clashing currents and swirling tides. The shifting sands form Diamond Shoals, the infamous zone embracing scores of ships, drawing more attention to the watery Graveyard. Early records indicated the European vessels were wrecked off the Carolina coast in the 16th century. One of the first was from the colonizing expedition of Lucas Vesques de Ayllon who set sail from Hispaniola in 1526 with three ships and 500 colonists. They were heading for the Spanish colony of Chircore, on what is now the Cape Fear River, when one of the brigantines ran aground. Efforts to free her failed as storms erupted and demolished the vessel. Thus the Spanish brig became one of the first recorded losses interred in North Carolina’s undersea burial grounds. 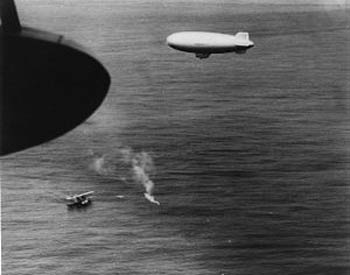 SUBMARINES: The U-352: Of the three World War II submarines divers like to explore, the U-352 remains one of the prime choices. Sunk by the U.S. Coast Guard Cutter Icarus, 26 miles Southeast of Beaufort, NC, May, 1942, it was discovered by Capt. George Purifoy in 1975. The 115-foot dive in the clear, warmer waters of the Gulf Stream attracts divers from all over to check out the remains of one of Germany’s famous wolf-pack marauders. But the divers almost lost their prize in the 1980s when a U.S. senator suggested that the Navy blow up the U-352 because its torpedoes posed an “imminent danger” and bones of the deceased might be found in the wreckage. The divers fought back however, along with fishing boat captains and dive shop owners, pressuring local politicians to enforce state’s rights and keep the government out of their graveyard. Big Brother backed off and the torpedoes and bones remain untouched to this day. The story of the sinking of the sub is one of the best stories from WWII. The captain goofed on two accounts and he, along with 33 others, became prisoners of war. Go to Numa.net, May 30, 2017, and see: “U-boat Loses in David Versus Goliath Battle.” 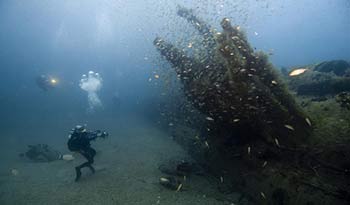 The U-352, sunk by the U.. Coast Guard Cutter Icarus in 1942, was discovered by George Purifoy in 1975 Credit: North Carolina Tourism Dept.

U-701: Sunk on July 7, 1942, the U-701 was a sitting duck for three 315 lb. depth charges dropped by Lt. Harry Kane, a U.S. Army Air Force pilot who spotted the enemy while on patrol. German Commander Horst Degen had ordered his vessel to surface for fresh air and a position check. The depth charges did their job in short order as all hands abandoned ship. Degen and six of his crew were the only survivors, spending two days on a life raft before a U.S. Navy blimp rescued them. They became prisoners of war for the rest of the conflict. Their submarine rests in 115 feet of water approximately 16 miles southeast of Cape Hatteras. Ironically, after the war, former pilot Kane, a resident of Kinston, North Dakota, tracked down former Commander Degen who lived in a small German town south of Hamburg. They became pen pals and exchanged letters while planning to get together in the future. Research doesn’t reveal if they ever met or not. U-85: When its last torpedo missed the Navy destroyer USS Roper, a surface engagement ensued off Kill Devil Hills, 15 miles east of Oregon Inlet, where the submarine came under heavy fire from the destroyer’s three-inch deck guns. When one of the shells breached the pressure hull of the conning tower, Oberlieutnent Eberhard Greger ordered his men to abandon ship. Depth charges finished off the U-85. There were no survivors. Dive clubs out of Nags Head and east coast submarine buffs visit the wreck in season to photograph deck guns, torpedo tubes and 88 mm shells scattered on the bottom at 100 feet. Although the hull is deteriorating, some of it still remains. Next Month: Graveyard of the Atlantic: Part II—Tankers and Freighters