Actually, we know what happened to the 356-foot-long, 2,500-ton Japanese submarine. It sank during a surprise attack by an Avenger bomber launched from the aircraft carrier USS Bogue, June 23, 1944. Faced with naval and air blockades that threatened to stifle Germany in WW II, Japan launched its secret C-3 type cargo submarine for transporting wartime raw materials to a naval base in Nazi occupied Lorient, France. Oh, and the gold? We’ll get to that in a moment.

Drawing of the vast size of a Japanese “I” boat like the I-52. Credit: Nat’l Archives

Unaware of the U.S.Navy and its Allies’ flair for intercepting messages, the Japanese proceeded with one of the most highly clandestine operations of the war. Cryptologists had broken the Imperial Japanese code that mapped the route of the I-52 from Kure, Japan, to a submarine base in German occupied Lorient, France. The I-52, with a crew of 99, was a cargo carrier loaded with 35 tons of military supplies and payment in gold to exchange for German wartime materials and advanced technology. But our forces became the “foxes in the hen house.” They laid in wait with coordinates of the route at their disposal, all gleaned from intercepts of the highly classified Japanese code. They also pinpointed the location of the I-52’s planned rendezvous with the U-530. But the Atlantic is big and the engagement, if it were to take place as planned, would be in the middle of the Atlantic Ocean, 800 miles south of the Azores.

Map shows the rendezvous of the two submarines and the aircraft carrier, plus the route to France that the I-52 never completed. Credit: Paul Tidwell Photo/Copyright

The two submarines met at the designated spot and transferred a navigator, two radar operators and a new radar design that would help guide the I-52 to Lorient. But an uninvited guest—Commander Jesse Taylor—appeared on the scene in his Avenger, dropping a bomb and a torpedo that sent the enemy vessel straight to the bottom. Naval records reveal the U-530 slipped away in the night. Ironically, the munitions that struck and sank their target didn’t smash and scatter it all over the bottom as is often the case. The I-52 sits straight up on the seabed with a torpedo hole in its starboard side and minor damage to the bow. Its cargo remains intact. Does that mean the gold, listed on the manifest, was still inside the sub? We’ll get to that soon. The discovery of the I-52 is just as exciting as its demise. 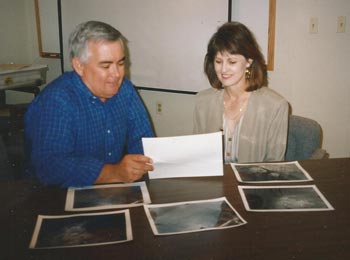 Paul Ttidwell and his wife, Joanne, previewing still photos of the I-52. Credit: Ellsworth Boyd

Paul Tidwell, who relocated to Jefferson, Texas, when Hurricane Katrina hit his hometown of New Orleans in 2005, had for years gathered thousands of pages of documentation on the I-52. He was so determined, he moved with his family to Washington, DC so he could spend endless hours in the National Archives, Library of Congress and several naval museums. One of the most talented researchers in the country, he was finally ready in 1995 to manage the search and survey operation and try to locate the elusive submarine. Eager to see if his calculations were correct, the Vietnam veteran and certified diver raised over $1 million for the search. Sound Systems, a marine contractor from Redmond, Washington, was hired for the job. The company chartered the R/V Yuzhmorgeologiya, a Russian oceanographic vessel capable of towing sonar, video and still cameras through thousands of miles of the mid-Atlantic.

After two weeks of scanning the bottom three miles deep, with food and fuel running low, Project Manager Tom Dettweiler mulled over the search and survey plan. Dettweiler, who was Operations Engineer for Jacques Cousteau aboard the RV Calypso and played a feature role in the discovery of the Titanic, questioned the search patterns and contacted Meridian Sciences, Inc. (now Nauticos, LLC.) in Columbia, Maryland. A former U.S. Navy contractor specializing in high tech computer calculations of nuclear sub routes, Meridian held the key to opening a new, successful search area. David Jourdan, president of Meridian Sciences and a Naval Academy graduate who spent five years as a naval officer aboard a nuclear submarine, had an inkling the operation was off target. 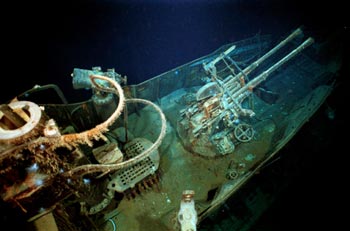 “We went back over stacks of ship’s logs, war diaries and intelligence reports from 1944,” Jourdan says, “and found the accuracy of their estimates was compromised by many factors. They included bad weather, winds, currents and maneuvers that hindered crews from obtaining good star fixes and accurately updated positions. After reexamining the Navy’s estimated position of the wreck, based on celestial fixes and rough dead-reckoning, we found the records were off target.” That’s when Tidwell, Dettweiler, and search team member Bob Cooke, fueled by Jourdan’s new information, led the expedition to their objective—a tiny cigar-shaped sonar image sitting upright on the bottom.

Tidwell and Nauticos parted after the discovery, the ladder completing a series of successful projects: the discovery and salvage of the Israeli submarine Dakar; managed the Discovery Channel’s live broadcast from the Titanic; discovered wreckage from the WWII Japanese aircraft carrier Kaga; and conducted a search for Amelia Earhart’s lost Lockheed Electra. Jourdan has authored books on the Dakar; the search for the Japanese Fleet: USS Nautilus and the Battle of Midway. His latest, Operation Rising Sun: The sinking of Japan’s Secret submarine I-52, is an engrossing story of a WWII encounter that was almost overlooked in the history of naval warfare.

Tidwell returned in 1998 aboard the Russian scientific research ship, R/V Keldysh, as an advisor to a National Geographic Magazine expedition. An article telling the story of the I-52 appeared in the October, 1999 issue and another one, Searching for Treasure, was published, August, 2011. Some of the subscribers wondered what became of the submarine and its golden treasure. Now, about that two tons of bullion estimated to be worth $25 million in the 1990s and more than $100 million today. 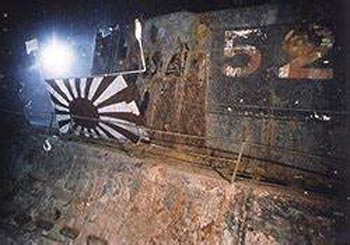 Manipulating controls from the Mir, a Russian submersible, Paul Tidwell placed a Japanese flag on the hull of the I-52. Credit: Paul Tidwell,Photo/Copyright

In all likelihood, it’s still there, possibly stored near the bow. National Archives records revealed this, but as Tidwell explained, “There are some factors involved, such as payment to a former investor and the $8 to $10 million it would cost to launch an expedition. But on the upside, deep ocean technology is much better now and I’ve maintained excellent relations with both the Japanese and U.S. Governments. When we returned some shoes and other artifacts recovered by the Russian Mir submersible on the second expedition, the Japanese were elated. They had a solemn but happy celebration in Kure, Japan, the home of some of the crew and the shipyard where the sub was built and launched.” The citizens of Kure were elated again when told that Tidwell, operating from the Mir, used its manipulators to place a Japanese flag on the hull.

While biding his time, Tidwell is focusing on the story possibly to be featured on the Discovery Channel or one of the other television programs featuring ocean adventures. “The I-52 discovery was akin to walking on the moon,” Tidwell says. “Like the moon walkers, we’ll continue to leave prints of our own using advanced technology and the tools of deep ocean exploration.” 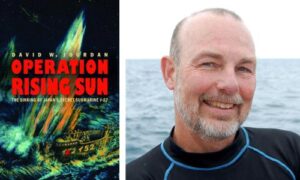 David Jourdan, President and CEO of Nauticos, has written five books including the most recent one about the I-52.
Credit: Bethany Jourdan, Nauticos LLC