Most people enjoy a banquet where they savor each delight from start to finish. For me, diving with the U.S. Navy Atlantic Fleet Audio-Visual Command was an undersea smorgasbord that served the best courses from beginning to end. 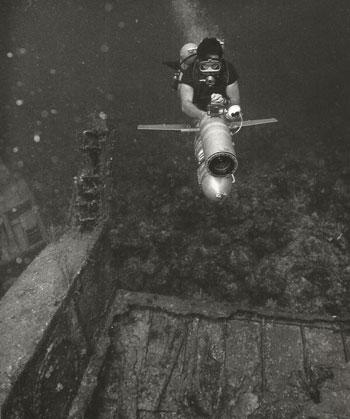 As an aperitif, we explored the shallow waters of Trumpet Reef where majestic formations of elkhorn coral grow to within a few feet of the surface. For hors d’oeuvres, I chose more visits to the prolific Andros reefs, while the main dish was a shipwreck. Dessert featured a ride on the Pegasus, the team’s diver support vehicle. The midnight snack was just that: a night dive on the coral reef where brilliant colors faded by the sun in daylight, burst forth when exposed by a diver’s night light.

All of these special treats, plus many others, were the result of a Skin Diver Magazine assignment. I was to follow the navy photographers for seven days of their one month annual training session on the pristine reefs of Andros Island, Bahamas. Based at the U.S. Naval Station, Norfolk, Virginia, Senior Petty Officer Richard Johnson and seven team members flew to the Atlantic Undersea Test and Evaluation Center, better known as AUTEC. 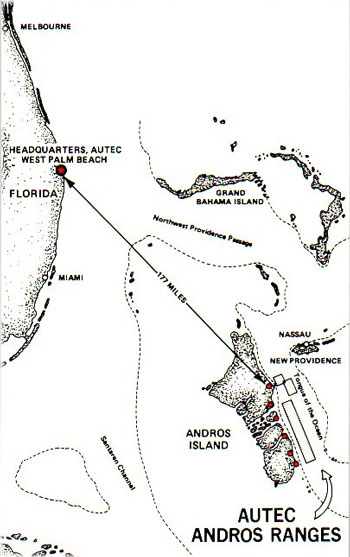 Located 180 miles southeast of West Palm Beach, Florida, and 40 miles from Nassau– the capital of the Bahamas–AUTEC was built in 1965 under an agreement between the U.S., United Kingdom and Bahamian governments. The site overlooks the Great Bahama Bank, part of the third largest barrier reef in the world and a fitting place for testing nuclear submarines and other weapons of underwater warfare. Most tests are conducted in the Tongue of the Ocean, a 6,600 foot deep canyon shaped like our organ of taste. Its deep, dark blue ambiance begins on a slope where the shallow waters of the Bank end.

Andros Island is a paradox in today’s world. It’s not far from Nassau’s hustle and bustle, yet remains the largest and least developed of the 700 islands and cays of the Bahamas Archipelago. One hundred miles long and 41 miles wide, it’s the only island in the chain with fresh water lakes.

The midday sun blazed down on a flat, calm sea where a dark, parallel reef line ran as far as the eye could see. With the Chief at the helm, our 20-foot Zodiac with an 80 HP Evinrude took off hellbent for some of the most beautiful coral reefs and clear waters of all the islands. The diver backup boat, a smaller Zodiac with a 50 HP Mercury, lagged behind in our wake. Dive supervisors from both boats stayed in touch using hand held two-way radios. One man remained in each boat when the divers descended toting their favorite camera or sometimes a prototype to test. We anchored in 30 feet of water off Trumpet Reef, an appealing coral garden not far from AUTEC. I had been briefed about the trumpet fish here and sure enough, we spotted some striped ones standing upright while swaying back and forth among the sea whips. Schools of brightly colored fish swarmed around large heads of brain coral. Looking like rush hour shoppers at Walmart, throngs of scaly rubberneckers including queen angelfish, rainbow parrotfish, blue triggerfish and striped grunts saw us and darted off, hesitated, and then returned. Varieties of tinted corals were endless, some lacy and delicate, while others, like trees, were simple and sturdy. 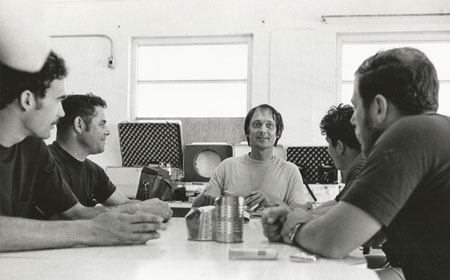 Other reefs, 40 to 50 feet deep, functioned as homes and hunting grounds for green turtles, sting rays, nurse sharks, barracuda and schools of amberjack. Pink and rose-colored sponges looked as if they had been poured like gravy into cracks and crevices that took hundreds of years to create. Beneath coral ledges, shadowy holes housed squirrelfish, green moray eels, lobster, crabs and other critters that liked the dark. 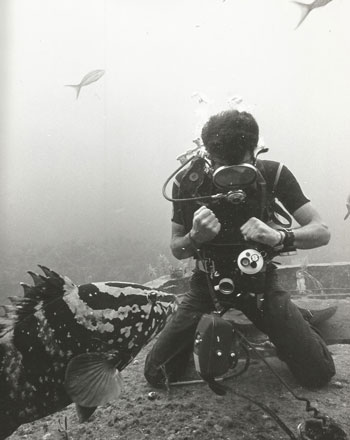 Ike Johnson gets nipped while feeding a Nassau grouper

Chief Johnson knew the island’s reefs and wrecks like his own backyard. He had been training divers on them for over 10 years. Triangulating Goat Cay with signal towers on shore, he dropped the anchor right on target. The other Zodiac caught up and anchored nearby. We were right over a Landing Craft Mechanized (LCM) wreck, an 80-foot-long military vessel sunk in 1963 by the late Dick Burch who founded Small Hope Bay Lodge. LCMs were used during WWII to transport men and vehicles ashore. Photos of the 1944 D-day invasion on the beaches of Normandy, France, show them in action.

The wreck sat upright on the bottom 70 feet deep, its catwalk providing a perfect spot to feed the fish and watch the team in action. Before I could pop the lid on a can of sardines, dozens of fish surrounded me, led by “Old Duke,” a 50 pound grouper. I remember asking Dave Harris, “How do you feed a big grouper?” “Very carefully,” he cautioned, “as they DO have teeth.” I gingerly offered the gluttons sardines which they devoured while the cameramen filmed the feeding frenzy. I did pretty well and got nipped only once. Yes, groupers do have teeth! When I ran out of goodies, some of the stragglers snapped at the straps on my vest and the string on the tin can. One of them nibbled at my elbow while another nipped at the hair on my legs. I looked toward Steve Waterman for help, but he just grinned through his mouthpiece. Finally, realizing the handout was over, the gluttons left as I sat back and watched the best photographers in the Navy do their thing. 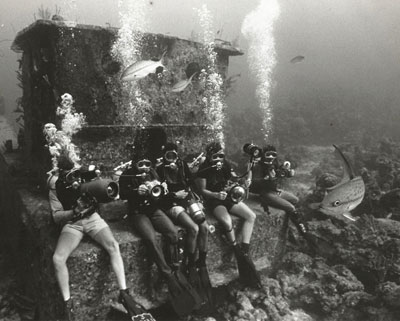 Photo team members, each with a different camera, sit atop catwalk of the LCM to photograph and feed the fish

Dave Graver took off his fins and tip-toed across the bottom, careful not to stir up the sand as he stalked a green moray hiding beneath the well deck. The Chief swam into the pilot house and framed me through one of the portholes. Ken Hess, the only trainee in the group, perched on the stern shooting diagonally across the main deck. Ike Johnson hovered 20 feet above the wreck, recording the panorama on video. Like a hunter gauging the flight of a game bird, Waterman panned Old Duke when he returned looking for another treat. When Eugene “Mac” McCraw broke open a sea urchin, a host of tropical fish, led by groupers, swarmed in to savor the surprise. Bob “Woody” Woods brought a treat that he swore the fish loved best: chunks of hot dogs! It appears the fish agreed, gobbling them down as soon as he pulled them out of the pack. 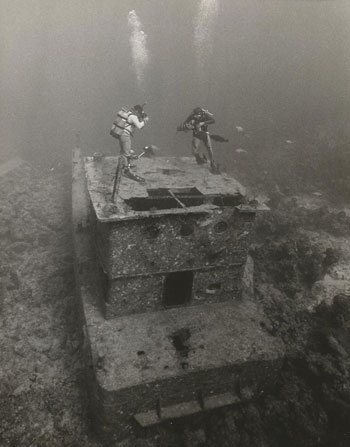 Photographers feed the fish on the roof of the pilothouse

Suddenly a deafening explosion broke the silence. It was dive supervisor Dave Harris demonstrating the team’s emergency procedure for recalling divers to the boat. The supervisor always carries an M-80 waterproof firecracker taped to a bolt so it will sink easily. It was time to go and as we headed to the anchor line, some of the fish, groupers in particular, trailed a few feet behind us.

When we returned to AUTEC, I told the Chief how impressed I was with the group’s dedication to teamwork. Each man pitched in with fervor, unloading gear, recharging scuba tanks, bathing cameras in fresh water and completing all the after-dive tasks. “This is a good bunch,” the Chief said. “They have team spirit and that’s what makes it work. If they pull together on land, it will carry over to the sea when we’re off shooting assignments all over the world.”

My seven days flew by and my assignment was successful. Perhaps that’s because the Chief and his men sort of adopted me as part of the team. Also, I think the residents of “Grouper Haven” approved of my feeding technique.