In 1506, a Portuguese navigator sailed his ship around a small island in the South Atlantic Ocean. The waters were rough and he couldn’t go ashore, so he did the next best thing. He named the island after himself. Today, Tristan da Cunha, a small dot on the map between Africa and South America, is recognized as the most remote, inhabited island in the world. Only 6.8 miles in circumference, “Tristan,” as everyone calls it, has only one town, Edinburgh-by-the-Sea. Located at the base of a 6,760-foot volcano, the “Settlement” has 285 residents that form a close knit community. Acclaimed for having no cancer after only one case was discovered in 1853, and no coronavirus, the absence of severe illnesses on the island is attributed to the lifestyle of the “Islanders.” These hard working, self-sufficient people are the impetus for a thriving economy based on rock lobster harvests, postage stamp production and farming. Embraced by fresh air and the lack of crime, it’s a simple life where family comes first and friendships last a lifetime. 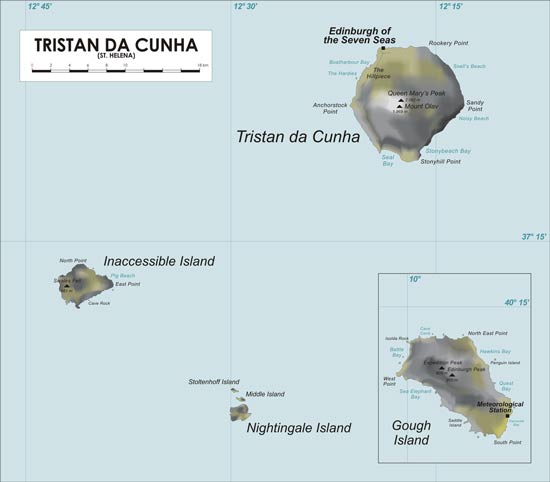 In 1810, Jonathan Lambert, an American from Salem, Massachusetts, claimed Tristan as his home and annexed it to the United States. He and two other settlers hunted fur seals and sold the pelts to whaling ships that stopped for fresh water. But in 1813, Capt. Charles Richardson of the HMS Semirannis, went ashore, raised his country’s flag and proclaimed the island a British possession. In 1816, Tristan, Inaccessible, Nightingale and Gough Islands were designated colonies and later declared British Overseas Territories. Today, Tristan and her three sister islands comprise the most remote archipelago in the world.

In 1778, Capt. Andre D’etcheverry of the French frigate Etoile du Matin, after failing to find a place to land, coined the name “Inaccessible.” An uninhabited volcanic island 25 miles from Tristan, it’s known for sheer cliffs and inhospitable terrain, Inaccessible and Gough Island–220 miles from Tristan—are UNESCO (United Nations Educational, Scientific and Cultural Organization) World Heritage sites. Home to the world’s largest colonies of sea birds, including albatrosses, petrels and rockhopper penguins, both islands are prime spots for ornithological research. Gough is uninhabited except for a staff of six personnel that man the South African Meteorological Station which was established over 60 years ago. Gough, like Tristan, was named after a seafarer, Capt. Charles Gough of the HMS Richmond. Nightingale, smallest of the islands, 1.5 miles in circumference, lies 18 miles from Tristan. Capt. Gamaliel Nightingale, of the HMS Vengeance, after landing there in 1760, coined the catchphrase, “I found it and I’ll name it.” While exploring, Capt. Nightingale found small cliffs, millions of birds and clumps of Tussock grass harboring countless penguin rookeries. The island, uninhabited but visited for scientific studies, is surrounded by heavy kelp beds which make it difficult for ships to anchor in bad weather. 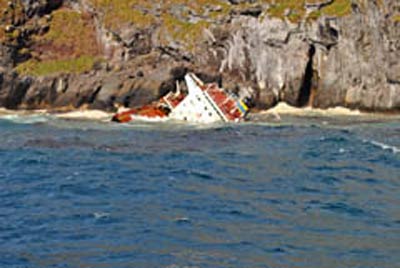 The Ms Oliva sank off Nightingale Island, spilling oil into the pristne waters

An infamous incident occurred on March 16, 2011 when the 75,000-ton cargo carrier MS Oliva—en route from Santos, Brazil to Singapore—ran aground off Spinner’s Point on the northwest promontory of Nightingale Island. Human error was to blame when the first mate misjudged the course coordinates and 300,000 gallons of unrefined petroleum were spilled into pristine waters while the ship broke in two and sank. There were no human casualties, but thousands of rockhopper penguins were soaked with crude oil. Only a small percentage survived as Tristan conservation teams did their best to clean the birds, beaches and waters. The “MS Oliva Disaster” made international news and the islanders were credited for their endless efforts to save the oil soaked aquatic seabirds. The wreck lies in two pieces, resting on its port side in shallow water where wind and waves batter the shoreline. 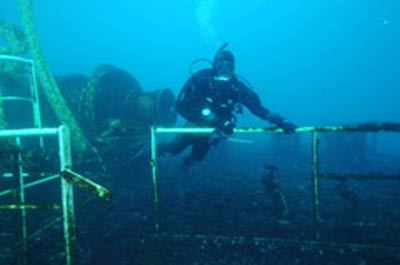 Divers inspected the MS Oliva and declared it unsalvageable

In 1821, the “Blendon Hall Incident” drew the attention of mariners everywhere. The 450-ton East India Company merchant vessel Blendon Hall was lost in the fog while sailing from Jamaica to Bombay, India. Blown off course in heavy seas, she ran aground off Inaccessible Island. Two seamen drowned, but 50 passengers and crew scrambled over the rocks to safety and watched their ship sink. Survivors were marooned for four months while living on fish, birds’ eggs and seal meat. After one failed attempt, another party made it to Tristan in a makeshift boat and sent help to the remaining castaways. In 1836, the American schooner Emily, sailing out of New York, was outfitted as a sealer to hunt the animals for their skins, oil and meat. While moored off Tristan, Capt. Peter Green’s ship dragged its anchor during a sudden storm and sank off the south shore. No lives were lost. Green, however, remained on the island, married an islander and had eight children. A highly respected resident, he became “Headman” of the Settlement and lived to age 94. In 1892, the Italia, a merchant ship sailing from Scotland to Capetown, South Africa, caught fire near Tristan. The quick thinking captain ran his vessel ashore, saving himself and his 16 crew. Two of them, Andrea Repetto and Gaetano Lavarello stayed behind, married Tristian women and had families whose descendants are still on the island today. Other shipwrecks in the archipelago include the Beacon Light, Henry B. Paul, Shakespeare, Helen S. Lee, Mabel Clark, HMS Julia and the Lark. 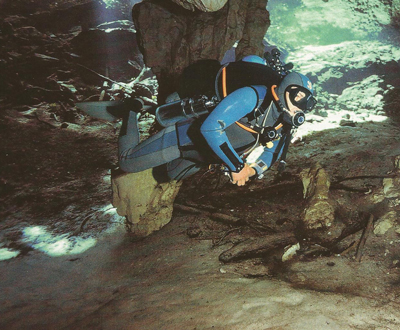 Diver approaches wreck of Blendon Hall, lost in the fog and sunk off Tristan da Cunha in 1821

Ichthyologists enjoy field days meandering among the scattered remains of schooners, barques, brigs and ketches, taking notes and capturing photos of some of the 41 different species of fish found in these waters. Moray eels, soldier fish and lobster seek cover in the shadows beneath barnacle covered planks and beams. Wrasse, grunts, shad and five finger fish cruise over nudibranchs, tubeworms and anemones clinging to the remains of keels and rigging. Whales, dolphins and porpoises, feed on krill mating in kelp beds found in deeper waters not far from the wrecks. A green turtle, devil ray or seven gill shark might veer in from the depths to check out the food supply on the wreckage. Water temperatures average in the mid-60 degrees Fahrenheit during winter and low 70s in summer. Divers are comfortable wearing 3 to 7 mm wetsuits in pristine waters showcasing 50 to 60 foot visibility. The islands retain a cool temperate climate with changing weather patterns softened by the trade winds. Sudden squalls generated by westerly winds are not unusual. Winters aren’t severe. There are no frosts, but snow forms on volcanic peaks. Records show many other ships lost in the Tristan Archipelago. The waters remain virgin territory for new discoveries.

Part I: Remote Island Has Shipwrecks, No Cancer