Just as airline tragedies are at times blamed on pilot error, so are shipwrecks occasionally the captain’s fault. Such was the case of the side-wheel steamship General Slocum that caught fire on the East River in 1904. Its captain, William H. Van Schaick, had two choices of possibly saving his ship and its passengers. Unfortunately, he made the wrong decision, resulting in more than 1,000 deaths and the loss of his vessel.

Named for Civil War General and New York Congressman Henry W. Slocum, the 264-foot excursion vessel was a familiar sight on this junket for many years. On June 15, typically the beginning of family vacations, the three deck steamer left New York’s Third Street dock at 9:30 am heading for Locust Point off the Bronx shore, where the East River meets Long Island Sound. It was overloaded with passengers including 360 children, their parents, and chaperones from St. Marks Evangelical Lutheran Church where German Americans from Manhattan’s “Little Germany” worshipped and socialized. 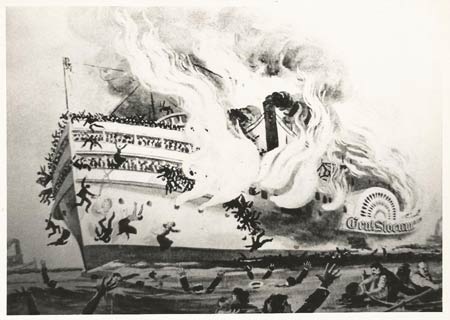 When the steamer was halfway to its destination, a fire was reported in a forward storage room filled with oil wipes, paint and other flammable materials. Battling the blaze, crewmen were frustrated as they tried to use water pumped from an auxiliary engine with worn and rotting cloth hoses. Cloth life preservers stored in racks over the decks were torn and tattered with decomposing cork popping out of them. It was discovered later that fire hazard equipment checks had not been made in over a dozen years. Ten lifeboats, lashed securely in place, weren’t launched as flames rapidly engulfed them and forced passengers to leap overboard.

The captain should have steered his ship to a dock in Queens, but chose instead to head for a sandy beach on North Brother Island where it grounded in a rocky bay, by then ablaze from stem to stern. Good Samaritans from shore waded in and formed a human chain to help, but by then 600 passengers were dying as the decks collapsed beneath them. Some became victims of the massive circulating paddlewheels operating on both sides of the ship. The final death toll was 1,031, mostly women and children from the church. According to the New York City Police Department, there were only 321 survivors. Ironically, the church had chartered this same trip for 13 consecutive years with no knowledge of the defective equipment or lack of lifeboat training by the crew. New York Mayor George B. McClellan, Jr. declared it the “worst maritime disaster in the city’s history.” 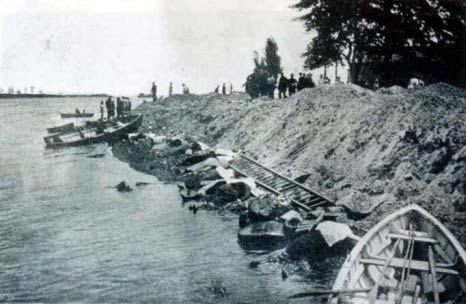 The disaster was international news and so highly publicized, reference was made to it in James Joyce’s novel, Ulysses. For decades, the aftermath of the sinking distressed the German American community on New York’s East side. A federal grand jury indicted the captain, two inspectors and the president, secretary, treasurer and commodore of the Knickerbocker Steamship Company. Only the captain was convicted. Found guilty of first-degree manslaughter, Van Schaick was sentenced to 10 years in Sing Sing Federal Penitentiary, Ossining, New York. He served three years, six months, until 1912 when President Howard Taft pardoned him. President Theodore Roosevelt refused an earlier request to release him. The captain died in 1927.

A shocking history of the General Slocum was revealed during court proceedings. The ship was involved in an unusual number of mishaps including multiple groundings and collisions. Four months after launching in 1891, the steamer ran aground off Rockaway Beach. In 1894, while returning from Rockaway with a full load of passengers, she struck a sandbar and blew out the electrical generator. The following month, she ran aground off Coney Island and passengers had to be transferred to another ship. In that same year, the General Slocum collided with the Amelia near Battery Park. In 1901, the crew was accosted by a rough, drunken group from Paterson, New Jersey. Seventeen of the troublemakers were arrested when the ship pulled into a New York police pier. Another grounding in 1902 left 400 passengers stranded aboard ship overnight until it broke free as the tide rose in the morning. 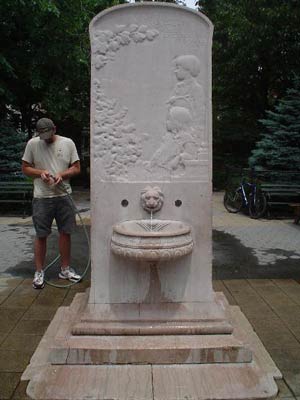 A fountain honoring the victims was erected in Thompkins Square Park, Manhattan, Credit: Library of Congress

In 1906, a memorial fountain honoring the victims was erected in Tompkins Square Park, Manhattan, once part of the “Little Germany” neighborhood. Donated by the Sympathy Society of German Ladies, its inscription reads: “They were earth’s purest children, young and fair.”

What remained of the General Slocum’s superstructure was salvaged and converted to a coal barge named Maryland. Caught in a storm in December, 1911, it foundered and sank off the southeast coast of New Jersey. No lives were lost.

Although more than 100 years have passed, descendants of the victims in the General Slocum tragedy—as well as others–still say a prayer when they visit the Tompkins Square memorial. It was long ago, but time has no restrictions on mourning the sad loss of so many innocent people who were simply on their way to a picnic.