‘Moonshine’ Not to Blame for Loss of SS Yongala

When vessels go down without a trace—no how, what, when or where recorded—they become “mystery ships.” Such was the case of the SS Yongala, a stately passenger and cargo steamship that disappeared March 24, 1911, off the coast of Queensland, Australia. There were no survivors. The 121 passengers and crew perished in a tragedy that became “Australia’s most famous shipwreck.” 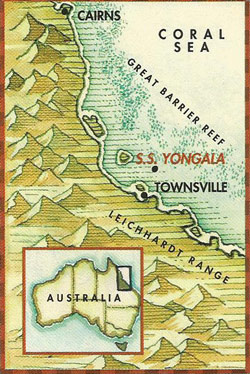 The loss also carried with it a never-ending rumor about “a horse that sank a ship.” Transporting livestock on ships was commonplace, so no one thought twice when a horse named Moonshine came aboard. Trainer John Campbell had purchased a mare in Brisbane and was shipping it to Townsville. The three-year-old won several races in Brisbane and was a promising prospect. Records show that Campbell and his horse arrived dockside and boarded the ship within the time table set for departure. Nevertheless, a rumor spread that loading the horse delayed leaving, thus hindering the ship’s progress in an approaching storm. The media made Moonshine the scapegoat saying she caused the delay, therefore was responsible for the tragedy. Many other rumors were spread, all unsubstantiated.

Named after a town in South Australia, the vessel was seven years old when the Adelaide Steamship Company put her in service on the Queensland coast. This was a busy trade route which included stops at smaller ports on regularly scheduled trips. Captain William Knight was experienced and highly respected in the maritime world. He was 48 years old when hired by the company’s president who called him, “A fine seaman totally concerned for the safety of his ship and its passengers.”

SS Yongala left Melbourne, bound for Cairns, on March 14 with scheduled stops along the way. One stop was Sydney where most of the passengers disembarked. Brisbane was the last port for the steamer before cruising north toward Townsville. She made a brief stop at Flat-Top Island on March 23, where freight and passengers were transferred to shore by small boats. Departing in the afternoon for the 208-mile trip to Townsville, the ship probably had about five hours of smooth sailing before running into strong winds and rough seas. That’s when a moderate gale became a raging storm. Without communication, the captain had no knowledge of the cyclone warnings that were sent along the coast. The wind increased to gusts of 70 mph. River and bay waters rose as the barometer dropped. If Capt. Knight had thought of seeking shelter earlier, it was too late now. The ship was steaming into the vortex of a cyclone that was battering the north Queensland coast.

When the weather finally calmed down, a quest began where no expense was spared in “Australia’s greatest maritime search.” The steamship company sent out two vessels and soon a government launch, a tugboat and two more steamships joined the hunt. The ship’s route was traced from Dent Island where the lighthouse keeper reported seeing it. Nares Rock and Halbourne Island, two dangerous spots, were scoured in addition to the reefs from Cape Cleveland to Cape Upstart. The launch Tivola searched along the coast all the way up to Halifax Bay. In three days, the intensive quest covered the inner fringe of the Great Barrier Reef and all bays and inlets. Landing parties searched the many offshore islands for survivors. The Queensland government offered one thousand dollars for information leading to the discovery of the mystery ship. Clues appeared when burlap bags full of chaff, bran and pumpkins turned up on Lighthouse Beach at Cape Bowling Green. More remains were found north of the cape including bedding, a mail bag and a broken glass door identified as being from the ship’s promenade deck The decomposing carcass of a horse, presumed to be Moonshine, was discovered on the beach. When the search culminated, local newspapers declared the steamship sunk with no survivors. 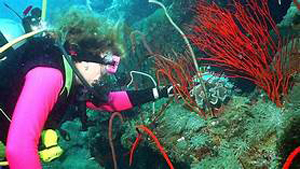 What actually happened to the SS Yongala remains a mystery. She sank far offshore with no eyewitnesses. As the years passed, the wreck faded in and out of the news as several divers claimed they discovered it, but provided no proof. In the summer of 1958, salvor Bill Kirkpatrick and diver George Konrat found the wreck on the reef in 90 feet of water, eleven miles from Cape Bowling Green. There was no doubt of its identity when Konrat found the ship’s name in large letters on the bow. 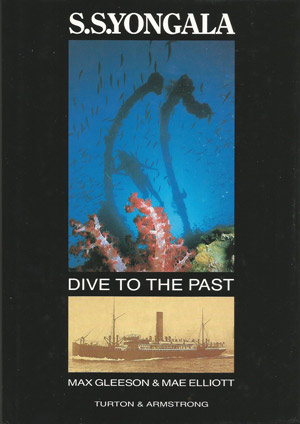 SS Yongala: Dive to the Past captures the whole story of “Australia’s most famous shipwreck”, Credit: Turton & Armstrong Pub. Co.

Salvage claims were made and the ship’s safe was retrieved with nothing of value in it. Salvors removed the prop and bell, but abandoned operations when funding ran out. Sport divers found the wreck in the early 1960s and salvaged port holes and other artifacts until the Historic Shipwrecks Act was passed in 1976. This protected the site by law and prevented further exploitation.

Listed on charts as an artificial reef, the 363-foot steamer rests on its starboard side in 90 feet of crystal clear waters. It presents a biodiverse ecosystem like no other in the Great Barrier Reef Marine Park. To this day, a medley of marine life provides an infinite venue for the aging vessel. Divers rave over the prolific marine organisms and fascinating “critters” that call it home. Jumbo trevally, ominous looking members of the jack family, feed on schools of silversides at the forecastle. Three-foot-long Maori wrasse hang motionless amidship. Massive potato cod show no fear as they follow divers across the main deck. Eagle rays cruise the promenade deck, while blacktip sharks and hawksbill turtles favor the quarterdeck where hawsers lay across rusting metal plates. A mélange of multicolored tropical fish cluster in “hot spots” where plankton and algae begin the food chain. Many varieties of stony coral colonies and gorgonians, surrounded by colorful sea anemones and sponges, have taken root throughout the wreck. Although many years have passed, key roles of subsistence are perpetually played by the occupants of this rare habitat in the Coral Sea.

Life continues beneath the waters, while the fate of the SS Yongala passes beyond human perception into the realm of conjecture. It remains a major story in Australia’s maritime history and one more entry on the docket of mysteries from the sea.