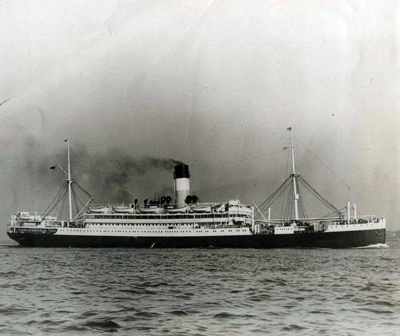 Murphy’s Law: “Anything that can go wrong will go wrong” is an old adage aptly applied to the sinking of the passenger liner SS Vestris, November 12, 1928. There was a late SOS; bungled lifeboat launchings; a negligent crew; an over-loaded cargo hold and nearby vessels without radios. In addition, poor judgment and neglect became major culprits in Murphy’s mandate.

Owned by Lamport and Holt (L & H) Liverpool, England, the liner left New York November 10 on a routine voyage to Buenos Aires, Argentina. The ship’s tourist appeal, combined with a return cargo of coffee and general supplies, helped its 83-year-old company become one of the trailblazers in South American trade. A day after leaving port, the steamship ran into a “moderate northeast gale” about 200 miles off the coast of Virginia. The seas were heavy, but not menacing when a leak appeared in a partially open coal hatch door that caused the ship to list to its starboard side. Despite the hazardous circumstance, Capt. William Carey failed to send an immediate SOS. 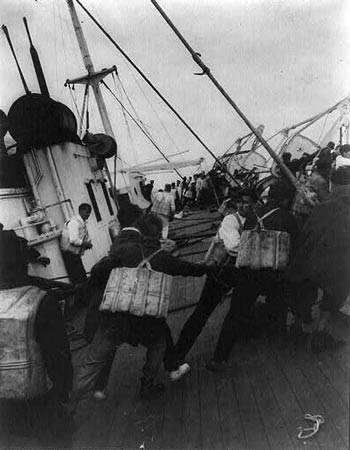 Crewman Fred Hanson took this photo of passengers scrambling to the lifeboats on the listing ship.
Credit: Library of Congress

The ship started leaking on November 11 and it wasn’t until 10 a.m. on November 12 that the first SOS went out, but it misstated the ship’s position by 37 miles. A second one was sent at 11 a.m. and soon after that, the captain gave orders to abandon ship. The ship sank at 2 p.m. with rescue vessels arriving late that evening and in the early morning hours of November 13. The steamships Myriam, Berlin and American Shipper, accompanied by the battleship USS Wyoming, rescued the survivors.

Capt. Carey’s efforts failed from the start as he tried to pump out the water filled ballast tanks responsible for the distribution of weight. The hull leaned to such a sharp angle, passengers could barely move in their cabins. Those who made it topside found the deck awash. As the cargo shifted and the tilt increased, the captain wired for help. Murphy’s Law persisted after the first SOS misstated the ship’s position. In the ensuing turmoil, two lifeboats were swamped and one sank. Some of the crew ignored the passengers and lowered lifeboats for themselves.

While estimates of the misfortune varied, final accounts revealed 111 losses from the complement of 325 passengers and crew aboard ship. None of the 13 children and only eight of the 33 women aboard survived. The captain went down with his ship. The 496- foot, 10,500 ton leader of the L & H line sank 200 miles off Hampton Roads, Virginia, in waters over one mile deep. 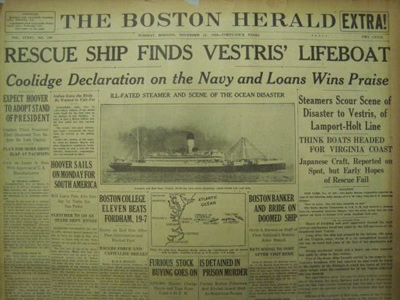 In loss of lives, the Vestris doesn’t match those who passed in the sinking of the Titanic, Lusitania or the Empress of Ireland, all disasters that shouldn’t have happened. But it was perhaps more shocking and sad that the captain’s imprudent delay in communication could have been avoided and loss of lives drastically reduced.

Recriminations began flying when the rescue ships arrived in port. The negligence of the captain, crew and the ship’s owners, who were British, made headlines on both sides of the Atlantic. Facing multiple lawsuits, Lamport and Holt quickly settled out of court for 100,000 GBP (British pounds), thus preventing testimony of the scenario from appearing in court. 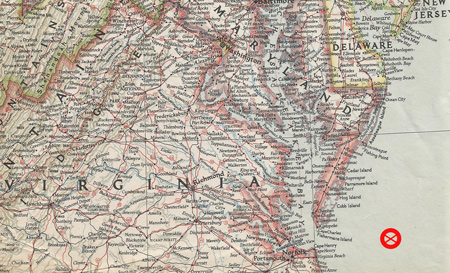 The SS liner sank in deep water 200 miles off the coast of Virginia. Credit: Library of Congress

Murphy’s Law didn’t totally overshadow the Vestris tragedy. Another old adage, “Every cloud has a silver lining,” surfaced at the International Convention for Safety of Life at Sea (SOLAS) held in London the following year. Future sailors and passengers benefited from striking testimony presented by rescue crews. They said many bodies were found face down even though they were wearing cork life jackets. As a result of this disclosure, the U.S. Merchant Marine authorized kapok life preservers that would keep an unconscious person’s face and head above water. This won significant acceptance and many seafaring nations followed suit.