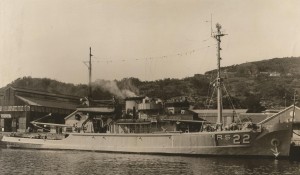 Last month, in a “Voice From the Bottom of the Sea,” Okino (Oakie) Sasaki, told his story of being aboard a Japanese two-man midget submarine during the December 7, 1941, attach on Pearl Harbor. When his vessel lost power and sank in the harbor, he escaped, swam ashore and remained a prisoner of war until 1945.

Author Ellsworth Boyd remembered reading about a midget sub being recovered from the harbor by U.S. Navy divers in 1960 and wondered if it might have been Oakie’s. This was a one in five chance since four others were lost in or near the harbor that day. 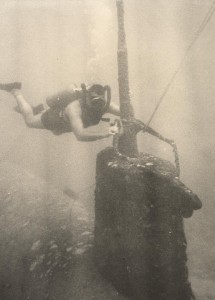 U.S. Navy archives revealed that the salvage vessel, USS Current, (ARS-22), brought up an intact two-man Japanese midget submarine in 1960 after a training team of underwater demolition divers discovered it in 90 feet of water near the harbor entrance. One of the divers reported: “We were setting charges on the bottom when I saw trough the milky water what looked like a ghost ship sitting upright. It was a submarine with a conning tower and a periscope, everything just like a regular submarine only in miniature. I knew right away what it was—a Japanese midget sub from WWII.”

Salvage divers made two unsuccessful attempts before the 80–ton vessel was finally raised, secured to the side of the ship and towed three miles to Waipo Point where Lieutenant H.R. Minard, skipper of the Current, made an official detailed report. At the very end, it read: “Once it was secured, the sub was thoroughly inspected. The torpedoes, still in place, had been neutralized by an explosive ordnance disposal team before salvage. The conning tower hatch was unlocked from the inside leading us to believe the crew escaped. No evidence of bodies was found. A glove, a sandal and a wrench were uncovered along with a small canvas bag. The bag contained a full bottle of sake and the remains of a woolen sweater.” 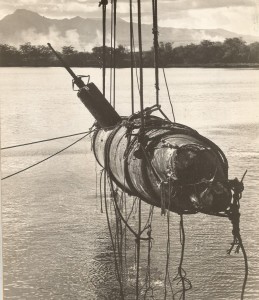 This was a eureka moment. It was Oakie’s sub. There it was in black and white–verification of the sake and sweater that had been thrust into Oakie’s hands by one of the crew from the mother submarine. When informed of the discovery, Oakie was surprised but not elated. He never liked the antiquated death trap that almost took him on a “turn toward Heaven” and nearly reduced him to just a “voice from the bottom of the sea.”

Oakie disliked fighting. He never wanted to go to war, but was forced into battle by tyrants whose warped beliefs he inwardly rejected. He is true to his own convictions and remains happiest in peace. He’s a strong believer in freedom, democracy, harmony and respect. His story has never been documented , but should be told—and told the world over.