Story of U-1226 Discovery Lingers in Cape Cod Community

Figuratively, I jumped aboard the U-1226 in June, 1993, when it was reported as being discovered in shallow water off Cape Cod, Massachusetts. But I wasn’t the only journalist to get a scoop on this astounding discovery. David Arnold of the Boston Globe, Barry Danforth of the Wall Street Journal, and Joe McVey of the Baltimore Sun joined me “aboard” the shipwreck and we all met our deadlines. “Aboard,” figuratively speaking, means we were the first to write the story after gathering all the details from the group that said they found the sub four miles off the Cape.

The U-1226 was a standard type IX-C open ocean submarine. This is the U-505, of the same class, which is on display at the Museum of Science and Industry, Chicago, Illinois.

Paul Matthias, then the head of Polaris Consulting, Inc., Narragansett, Rhode Island, (a company that locates shipwrecks) said that in order to get a picture he used a sonar towfish and a high-powered imaging system which processes sonar and navigation data from satellite signals. Diver Paul Michaud, of Framingham, Massachusetts, says he spent three years poring over books and microfilm after Capt. Al Stewart of Yarmouth, Massachusetts, spotted a long, thin silhouette beneath the sand from his airplane. All three said they were elated over the discovery.

“We all donated our services,” Matthias said, and used our imaging system aboard Al’s 25-foot boat. A major piece of equipment, called Eoscan, created 3-D images of objects on or beneath the sea floor. Although the sub is almost 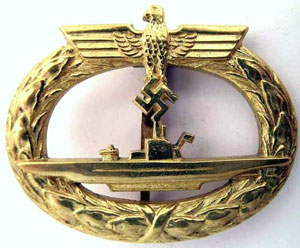 totally buried in the sand, pictures show what we believe are the conning tower, a gun mount and the inner pressure hull. Lots of sand waves appeared in the picture indicating a three to four knot current which could cover or uncover objects on the bottom during storms.”

The team didn’t dive on their discovery, preferring to contact German officials for their input. German diplomats showed little interest in the find and preferred it to be declared a war grave and sealed tomb. But the door was open for diving since the state of Massachusetts had no jurisdiction under the Abandoned Shipwreck Act. The sub was purported to be four miles out, one mile beyond the maritime law. 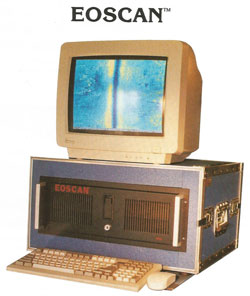 This 1993 Eoscan was purported to create 3-D images of objects on or beneath the sea floor. Credit: Boston Globe

According to Michaud, the U-1226 was one of four U-boats operating between Newfoundland and Long Island, New York, during WW II. He said his research showed that on October 28, 1944, the boat surfaced near Nantucket, Massachusetts, at 7 p.m., when the captain broke radio silence by speaking and tapping out Morse Code on a restricted U.S. Coast Guard channel. A radio operator at the U.S. Navy’s listening and direction finding station at Chatham, Massachusetts, not realizing it was the enemy, broke in and warned the user to get off the restricted channel. When the U-boat captain ignored the warning and continued his transmission, a naval fighter squadron based at the Navy auxiliary air facility, Hyannis, Massachusetts, was alerted. Planes took off immediately and within six minutes spotted the submarine and sank it with one 50-pound bomb. There were no survivors.

Michaud said that naval archives revealed the Navy and Coast Guard had been looking for a German sub deploying spies on U.S. soil. He was convinced it was a “spy sub.” But if the U-1226 had been a spy sub, why would the captain break radio silence—a real no-no in the German submarine command– and then compound his faux pas by refusing to get off after being warned? Marine historian Carol Schmid says, “This would be more like something enacted by the Keystone Kops rather than the sly fox tactics of the German U-boat arm.” Schmid was one of the first to become suspicious of Michaud and Matthias, particularly when they claimed the sub carried gold bullion, art treasures and personable valuables. Naval personnel specializing in submarine history also doubted the story and remained skeptical about Mathias’ technology and interpretation of his sonar pictures.

Finally, in exposing the Polaris Group, what does Harry Cooper, the “Dean” of German submarine history, have to say? “You mean that the secret U-boat filled with gold in the Sea of Tranquility is bogus?” Harry says with a smile. “An attorney from New England has been one of the engines behind exposing them and pushing the FBI into going after these frauds. I was interviewed about them by the FBI and various TV stations and newspapers some years ago. One of the Polaris Group even confessed to the FBI about making up phony files and documents. But they’re still free. How these guys are not in prison is a mystery to me.”

Yes, all of it was a ruse. Many journalists, including yours truly, had the proverbial “egg on the face.” But we all owned up to our mistake, gave an apology and corrected our stories. The U-1226, a Class IX-C open ocean sub, was never found. The Navy lists it as “a probable loss somewhere north of the equator.”

Note: Harry Cooper of Hernando, Florida, has worn many hats in an adventurous and diverse career. He has been a corporate executive for a large company, a race car driver and instructor, a boat captain and a publisher. A student of history, especially that of the German submarine command, he started a newsletter in 1983 that was simply designed to share his interest with others. Little did Harry realize at the time that this would grow into a popular magazine as well as an International U-boat historical organization known as “Sharkhunters.” Cooper’s proudest moment came when Sharkhunters was recognized as the world’s largest and only official site for U-boat history. He has written many books about U-boats and takes members on tours to sites that were historically important to the Third Reich. Some favorites have been Wolf’s Lair, Hermann Georing’s residence and Adolph Hitler’s vacation homes in Bavaria. The tours, called “patrols that relive history,” have traveled recently to Argentina in search of sites where Hitler may have lived.

For more information on publications and patrols contact:
Sharkhunters@sharkhunterss.com