Part II – What Next Grand Dame? Andrea Doria In Hospice

John Moyer looks back with fond memories on his extraordinary recovery of the Gambone sculptures. He knows he’ll never enter the Wintergarden Lounge again, nor will anyone else. The lounge, like the rest of the Andrea Doria, is buried beneath crumbled partitions, fallen bulkheads and twisted stairwells. 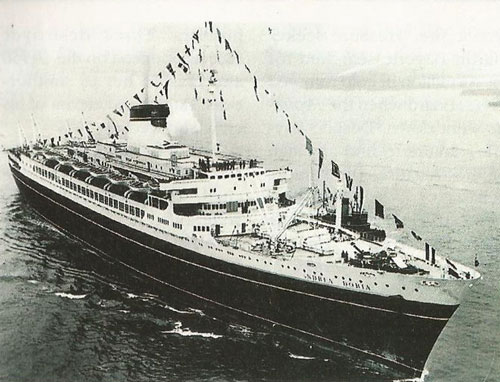 Andrea Doria was the flagship for the Italia Line.
Credit: Ellsworth Boyd Archives

As far back as 1974, Gary Gentile reported deterioration on the wreck. He used to tie into the promenade deck at about 170 feet. If the visibility cooperated, divers could get a good look at the liner. Resting on its starboard side, its sliding glass windows and portholes stood out like small targets on a rifle range. Broken inward from the intense water pressure, their frames and surrounding steel hull teemed with sea anemones. Even then, most of the upper structure, including the bridge and smokestack, had fallen into a twisted heap of metal on the ocean floor.

Two submersible surveys—one in 2014 by scientists from the University of New Hampshire—and the other in 2016 by Ocean Gate, Inc. of Everett, Washington, came to a not too surprising conclusion: “Rapid breakdown all over.” Detailed images of the 29,000-ton vessel reveal most of the superstructure collapsing including the upper decks. The swimming pool is encased in debris and the bow has broken off forward of the fallen bridge. The bow is one of the few places with definition. A large crack has appeared at the stern, but offers no entry gaps. As the ship decays, familiar guideposts divers once used to navigate around it are disappearing. The old gal, known as the Mount Everest of Diving, is barely recognizable for what she was in her heyday. Times have taken its toll. Like a patient with little hope, the once robust lady is in a hospice state. Renowned East Coast diver Evelyn Dudas of West Chester, Pennsylvania–the first woman to dive the Andrea Doria—summed it up succinctly when she said, “I’m happy I visited it in the good old days…there’s not much left now.” 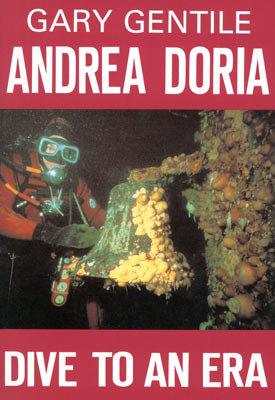 One of the best books of many written about the Andrea Doria
Credit: Gary Gentile

Many books have captured the saga of the Andrea Doria including Out of the Fog, Collision Course, Deep Descent and Lost Liners. One of the best is Gary Gentile’s Andrea Doria: Dive to an Era. A native of Philadelphia, now residing in Jim Thorpe, Pennsylvania, Gentile has logged more than 100 dives to the wreck. He, along with Bill Nagle, Tom Packer and other dive team members recovered the ship’s bell. Packer and the anemone-encrusted bell are featured on the cover of the book. 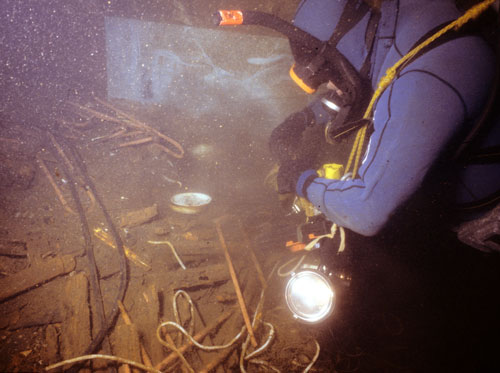 Searching for goodies in the gift shop in the First class Foyer
Credit: Gary Gentile

Gentile’s discovery of the “Negozio,” (Italian for Gift Shop) in the first class foyer became a hair raising experience. His entrance was a black hole where he swam down past dangling wire cables to reach a small, cluttered room. The beam of his light showed 220 feet on his depth gauge and what appeared to be shelving and overturned display cases. The light also exposed shiny objects sticking out of the mud and silt beneath him. Quickly opening his mesh bag, Gentile plucked handfuls of the mud encrusted objects and jammed them in. As the bag grew heavier, he sank down into the ooze creating zero visibility. Disorientated, but not panicky, he moved slowly toward the exit and ran into a blank wall. Cool yet concerned, he froze and waited patiently for the silt storm to settle. When his light picked up some risers—the vertical face of stairsteps—he knew he had overshot his mark. Backtracking cautiously, he avoided a “spiderweb of hanging wires,” all the while looking above for more of them. Breathing a sigh of relief, he saw a comforting green glow…the light filtering down from the entrance to the black hole. Back aboard the dive boat, Gentile’s buddies cheered when he dumped the bag’s contents on to the deck. He had hit a jackpot of necklaces, rings, earrings, bracelets, rosaries, figurines, hand-forged spoons with a painting of the ship on them and more. The Dame’s Negozio had served him well. 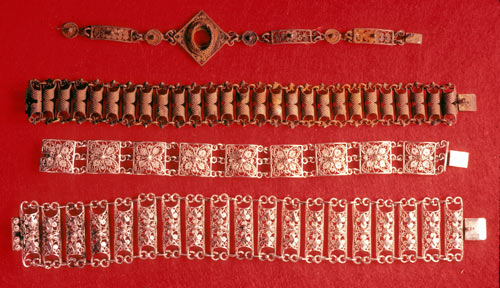 The thrill of visiting the Andrea Doria hasn’t totally diminished. Just seeing it might fulfill a diver’s bucket list, but matching Gentile’s and other salvage divers’ feats is no longer an option. There could be some souvenirs buried in the debris field, but the rest is lost in the ruins. On the inside flap of the dust cover of his book, Gentile concludes: “The Andrea Doria is a ship that did not die upon sinking, but instead found new meaning. She is a time tunnel to an era of transportation now extinct, a remnant of bygone years of transatlantic service. She is a ship that will never be forgotten.”