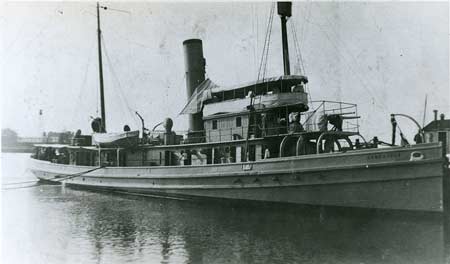 The Conestoga was a large tugboat

“It took 95 years for the “mystery ship” USS Conestoga to be discovered and descendants of the 56 sailors aboard to find closure. In the summer of 1921, the 170-foot tugboat disappeared while sailing from San Francisco to Hawaii. When the vessel’s arrival was long overdue, the Navy launched a massive air and sea search that covered the waters from Hawaii to Mexico. The search would have begun sooner, but the ship had been incorrectly reported as having arrived safely at Pearl Harbor.

The only trace of what became one of the top ten maritime mysteries was a lifeboat found off Manzoni, Mexico, bearing the initial letter of the ship’s name. This confused the search teams that had no idea the boat had sunk close to where it set sail. 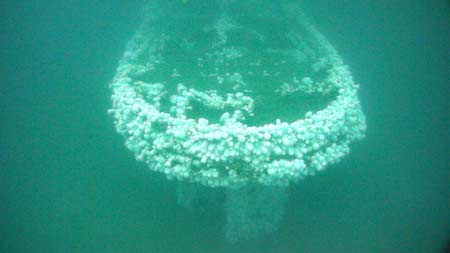 Sea anemones cover the stern of the shipwreck

Using remote operated vehicles (ROVs) on March 23, 2016, a joint National Oceanic and Atmospheric Administration (NOAA) and U.S. Navy mission confirmed the wreck as the USS Conestoga. Resting in 190 feet of water, it was found close to the Greater Fallaron Islands National Marine Sanctuary, just 20 miles west of San Francisco. Images from ROV cameras revealed collapsed wooden decks, the propeller, a steam engine with boilers and a 50-caliber machine gun. The remains of the hull are covered with a blanket of sea anemones and other marine life. Naval records aren’t clear as to whether or not the tugboat was towing a coal barge. None was found in the sonar survey. Studies show the tugboat made it to within three miles of a safe harbor at the Fallarones.

James Delgado from NOAA’s Office of Marine Sanctuaries Maritime Heritage Program led the search as well as the preliminary scanning a year earlier when a number of unidentified wrecks were charted. He led the team again when it returned in 2016 and solved the mystery. Reasons for the demise of the long lost boat, found nearly a century after its disappearance, remain speculative. Prior problems with the bilge pumps led to a conjecture that the vessel took on water and turned toward the Fallarones. Another possibility was a microburst, one of the most feared and least understood weather systems that plague ships at sea. A survivor of a schooner that was hit by one described it as “a wall of mist that whisked us over.” (See “Pride of Baltimore Memorialized at Fort McHenry,” Numa.net, June 1, 2016). 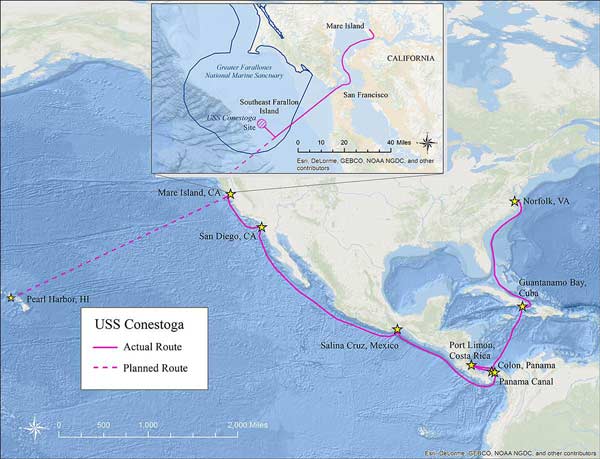 Despite the occasional bilge pump problem, the 450-ton vessel was seaworthy, performing well during her four years of service. Built by the Maryland Steel Company, Sparrows Point, MD 1917, she was considered large for a tugboat, but served well while attached to the Naval Submarine Command. In addition to towing duties along the Atlantic coast, she transported supplies and guns during WWI and escorted convoys to Bermuda and the Azores as part of the American Patrol Attachment. While in the Azores, she towed disabled ships and escorted convoys until recalled to harbor duty in Norfolk, Virginia. The single funnel, twin-masts tug drew various duties including the California to Hawaii assignment which ended her career amid mysterious circumstances.

“After nearly a century of ambiguity and a profound sense of loss, the Conestoga’s disappearance is no longer a mystery,” said NOAA Deputy Administrator Manson Brown. “We hope the discovery brings the families of its lost crew some measure of closure and we look forward to working with the Navy to protect this historic shipwreck and honor the crew that paid the ultimate price for service to their country.”

“It’s overwhelming for me and my family,” said Diane Gollnitz, 73, of Lutherville, MD, granddaughter of the skipper, Lt. Ernest L. Jones. “I’m happy the site will remain untouched and is listed on the national Register of Historic Places as a marine sanctuary.”