Empress of Ireland Was ‘Canada’s Titanic’ 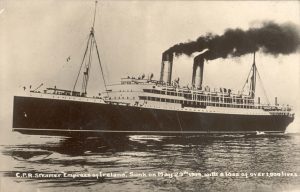 Chances are most people know something about the RMS Titanic tragedy. They may not remember details, but they recall that a vast number of lives were lost. On the other hand, if you run the RMS Empress of Ireland by them, you might get a blank stare.

Titanic records list 1,517 lives lost while the Empress of Ireland’s total isn’t too far behind at 1,012. The latter, Canada’s worst maritime loss–other than warships–is often overlooked in marine chronicles. This could be contributed to its Canadian connection or that it sank in a river. Nevertheless, both liners have much in common other than their sad demise.

The Titanic struck an iceberg while the Empress was struck by another vessel. Other contributing factors from the collision were debated and remain in the records to this day. The Titanic story revealed failed communications and flaws in the watertight compartments. For the Empress, it’s a debate over the Rules of the Road, navigational guidelines for avoiding collisions on waterways, and again a question about watertight compartments. 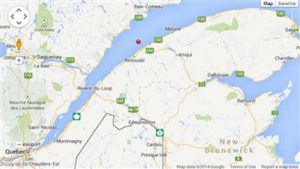 Map: The Empress of Ireland sank in the St. Lawrence Seaway

The Empress of Ireland and her sister ship, the Empress of Britain, were the first Trans-Atlantic passenger liners of the Canadian Pacific Railway (CPR), increasing emigrant trade between Liverpool, UK, and Canada. Passengers savored the impressive accommodations of the liner as it steamed outward bound on the St. Lawrence River–Quebec to Liverpool–May 29, 1914. Most of the 87 first class, 253 second class and 717 third class passengers were asleep when the harbor pilot, who was guiding the ship out to sea, was dropped off near Rimouski in the dreary morning of May 30. At approximately 2:30 a.m., the pilot spotted the lights of the 440-foot Norwegian collier, SS Storstad, inward bound about eight miles away.

Capt. Henry Kendall of the Empress, and the Norwegian skipper, Capt. Thomas Andersen, were in clear view of each other until their vessels were about two miles apart. That’s when a fog bank suddenly appeared, but shouldn’t have been a problem if each ship stayed its course.

Both captains later claimed they gave proper navigational instructions to avoid a collision, yet something went askew. The Storstad slammed into the starboard side of the Empress, forging a 14-foot-deep gash amidship. As the heavily loaded coal carrier disengaged and slipped backward, lifeboats were launched from both vessels. But the liner failed to get them all into water and it sank within 14 minutes. Many of the victims drowned or died from exposure to the frigid waters.

Later, at a Commission of Inquiry held in Quebec and lasting eleven days, the captains blamed each other for the mishap. Witnesses from the Storstad claimed their ship was approaching “so as to pass red to red” (port to port) while those from the Empress said their vessel was approaching “so as to pass green to green” (starboard to starboard). But had this been the case, the accident could have been avoided. After all evidence was presented, the commission concluded the Storstad was to blame for changing her course. But it also brought to light a major factor in the demise of the luxury liner. Had the captain closed the watertight compartment doors before his ship started to list, it would have–in all probability–remained afloat. 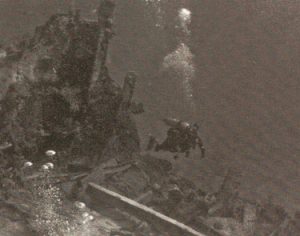 After the CPR filed a $2 million lawsuit against the Storstad’s owners, the Norwegian line forfeited the vessel to the plaintiffs as compensation for the loss. CPR wasted little time in selling the freighter to the Prudential Trust Insurance Company for the paltry sum of $175,000. But later, in March, 1917, the vessel’s fate was sealed when a German submarine sank it off the coast of Ireland. Fortunately, no lives were lost. World War I was good to captains Kendall and Andersen, both of whom served their countries as skippers of Allied ships and returned home when the fighting ended.

The 551-foot Empress lies in a trench on the bed of the St. Lawrence Seaway five miles off Pointe-au-Pere (Father’s Point) near Rimouski. Diving her is no piece of cake. Six divers have been lost since the wreck was discovered in 1964. Experienced divers give fair warning to recreational enthusiasts who think they can just drop down and take a peek at the historic remains. The water is frigid and currents vary depending on the tides. The ghostly figure rests on its starboard side in 80 to 145 feet of water. The 30 to 40 foot visibility near the surface is deceiving and rapidly fades upon descent. Average visibility of 6 to 10 feet necessitates good navigational skills and reliable lights.

In the summer of 1914, CPR hired a salvage company to retrieve the first class mail, purser’s safe and $150,000 in silver bullion. The path they blasted into the wreck is still there, riddled with overhanging wires and beams. In 2009, the wreck was designated a national historic site to prevent further removal of artifacts. Not many of them remained after the entire structure above the hull collapsed including all four decks above the interior promenade. Some of the wooden decks remain near a fireplace which sits among the debris in the dining rooms near the stern. A bathroom with a ceramic floor is visible near the stern and as divers follow a scatter trail, they come upon portholes, winches, open cargo hatches, an iron staircase and a crow’s nest. Everything in the debris field on the riverbed is covered with silt. The best way to visit the Empress is with one of the local dive services. They know the best times, tides and trails to follow for a safe, challenging experience.

Artifacts from the wreck are on display at the Pointe-au-Pere Maritime Historic Site, Quebec, and the Canadian Museum of Immigration, Halifax, Nova Scotia. Many books have been written about “Canada’s Titanic,” including: Into the Mist, Dark Descent and Almost Forgotten. Although the Empress will be remembered as a great maritime tragedy, it shall always retain the inspirational allure of the golden age of luxurious liners blazing new routes in the North Atlantic, while playing a major role in settling western Canada.