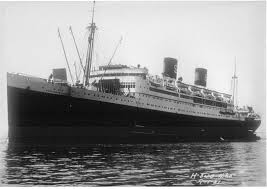 Like the old Chinese proverb, “A bee stinging a weeping face,” the troopship SS President Coolidge experienced one mishap after another before it became a victim of friendly fire in WWII. When it struck the first mine, Capt. Henry Nelson figured he might save his 654-foot vessel, but the second hit convinced him it was pointless and he had to save the 5,340 U.S. Army and naval personnel aboard.

On October 26, 1942, the Coolidge entered the main channel of Luganville Harbor on the island of Espiritu Santo, the largest of a chain of islands known at that time as New Hebrides. The chain became Vanuatu after gaining independence in 1980. The troops were sent there for harbor defense, airfield protection and support for forces stationed at Guadalcanal and other Pacific garrisons. The Pacific Theater of Operations was a hotbed of action in battles against the Japanese and all the island harbors were heavily protected. Unfortunately, Capt. Nelson’s sailing orders accidentally omitted the presence of mines anchored throughout the harbor of the large Luganville military base. Contributing to the oversight, base support failed to send a patrol boat to escort the ship through the channel, assuming the captain had received entry instructions from Navy headquarters. The captain was warned of enemy submarines around the islands, but nothing was said about mines.

Realizing the damage done amidship and at the stern, the captain ran his ship aground and gave orders to abandon it. Within 90 minutes, all but two of the more than 5,000 men aboard reached shore safely. A navy fireman in the engine room and an army captain who was helping his men escape from the infirmary, were the only causalities. When the ship struck the coral reef, it was so close to land, many men simply waded ashore.

Assuming the vessel would remain aground, orders were given to hustle ashore and leave everything behind. But the supplies, equipment and personal belongings were lost when the Coolidge slid off the reef, down a slope and settled in deep water on its port side. Navy salvors returned to the wreck for its propellers, engines, steam turbines and some of the cargo. They opened two holes in the starboard side to gain access to the engine room. This enables sport divers to explore part of the ship that otherwise would have been difficult to penetrate. Much of the cargo remains throughout the wreck thanks to a law passed in 1983 when the Republic of Vanuatu declared the Coolidge a marine reserve. 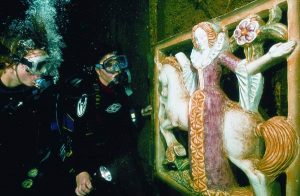 Island dive services offer charters to the wreck. Their guides host guests to depths of 65 to 240 feet, depending on experience levels. Most dives require decompression stops, one of them near a coral garden teeming with tropical fish and colorful anemones. To begin, divers are often taken to the two forward cargo holds on the starboard side of the wreck where remains are similar to the Japanese ships sunk in Chunk Lagoon, Micronesia. A troop carrier, trucks, jeeps and a 155 mm Howitzer gun appear in the ample light that penetrates the spacious interior of the 21,936-ton vessel. Helmets, canteens, gas masks and other gear are strewn across the promenade deck, reminders of the soldiers’ hasty exit. Escape ladders still hang from the windows and 20 mm anti-aircraft guns remain on the bottom deck. The signature dive at 145 feet features “The Lady” in colorful attire on a well preserved ceramic frieze. Adorned in an Elizabethan gown, standing next to a prancing steed, her outstretched arms appear to be welcoming passengers to the first class lounge. Divers survey the bridge, pass through the officers’ quarters and head for the heads: rows of toilets still in place. Deeper, over 150 feet, they enter the galley where pots, pans and kitchen utensils cover the floor. In another area, a barber chair remains in place waiting for a customer, while a soda fountain still holds cases of Coca-Cola, ice-cream sundae glasses and straw holders. At 170 feet, the swimming pool is still filled with water (pun intended) offering further clues that this wasn’t a standard military transport vessel.

Named after Calvin Coolidge, the 30th president of the United States, the ship was seven years old when the American Presidents Line bought it from the John Dollar Steamship Company in 1938. A luxury passenger liner based in San Francisco, it sailed to Manila in the Philippines via Kobe, Japan and Shanghai, China. It was short-lived as a troopship outfitted in 1941 and lost a year later.

The loss of a vessel this size and the scenario of its demise was shocking to military commands and civilians alike. Loaded with needy military supplies for our fighting men and Allies, it struck a blow at a critical time when the war was in its infancy. However, historians who looked back put a positive spin on the tragedy. They lamented the loss of two brave men, but cited the possibility of what could have happened had the captain not acted so swiftly. Capt. Nelson was acquitted of all accusations in three inquiries held by military commissions to determine how the mistake transpired. In the final analysis, the high command was the goat and the captain a hero.