Winfield Scott is No Match for Foggy Foe 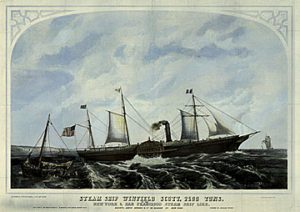 When the paddle wheel steamer SS Winfield Scott sank in 1853, its namesake wooden figurehead was on the prow, a symbol of one man’s spirit and courage. The ship’s captain and crew were inspired, but they were no match in a battle against thick fog, heavy surf and jagged rocks off Anacapa Island, near Ventura, California. 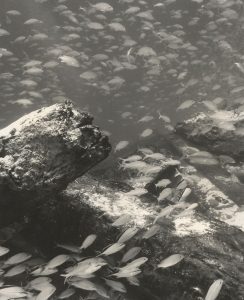 “The fog was so dense on the evening of December 2,” wrote passenger Richard Keen in a book about his California adventures, “I could not see anything from the bow to the stern.” In order to save time, Capt. Simon Blunt, an experienced mariner and graduate of the U.S. Naval Academy, decided to take a short cut through the narrow Santa Barbara Channel, a mistake that cost him his naval career. He had made this journey before aboard the Pacific Mail Steamship Company’s 225-foot, three masted, three decked bark, San Francisco to Panama and on to U.S. ports along the east coast. The California gold rush was only a couple of years old and many of the approximately 400 passengers were miners returning home with their caches. In addition to mailbags, the Winnie—as the crew called her—was purportedly carrying $700,000 in gold, much of it dust and nuggets. Fortunately, no lives were lost, but all the folks aboard encountered a strange experience. They became marooned on a rocky promontory where some had to remain for a week. 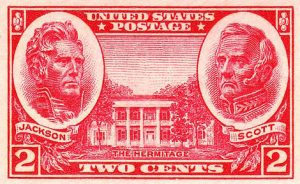 It wasn’t long before the passenger ship, SS California, spotted the survivors and sent lifeboats for the women and children. It had its own load of passengers and couldn’t return for a week, compelling the castaways to live on fish and whatever they could retrieve from the steamship which was still barely afloat. Its crew remained on the island awaiting the arrival of the steamship SS Republic dispatched from San Francisco to help with the salvage. The gold had been removed and there wasn’t much else of value remaining. Twenty-five mail bags containing nearly 10,000 letters were retrieved in 14 feet of water. The company followed its motto, “The mail must go through,” and after a drying period, resealed and restamped everything for delivery. 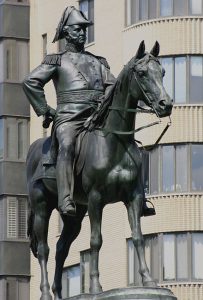 Hardhat divers from San Pedro were hired to salvage what they could from the remains. Using dynamite on part of the wreck, they recovered iron, brass, copper and General Scott’s figurehead. Years passed until divers from Santa Barbara came during WWII and salvaged metal for the war effort. In 1957, the late Dick Anderson–a California diving legend–was the first scuba diver on the Winnie. He returned and made a film, “Gold on the Winfield Scott,” about finding coins in the sand. With a unique sense of humor,
Anderson included some of his amusing experiences on the wreck. He made the rounds of the diving circuit for years where the film became a classic attraction. As word got out, charter boat trips to the wreck became popular and divers occasionally found a gold coin or a piece of brass. But their searches ended in 1987 when a “sting” operation was conducted on the site. Local authorities, posing as recreational divers, issued citations to a group from the California Wreck Divers Club charging them with illegally retrieving artifacts from a National Park. In 1980, Anacapa, Santa Barbara, San Miguel, Santa Rosa, Santa Cruz and their waters became the Channel Islands National Park and it became a federal offense to salvage anything from them. The law hadn’t been enforced over the years. Thus, the sting incident, which was accompanied by heavy fines, sent shock waves through the sport diving community. 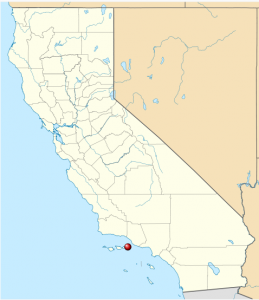 Location of the Winfield Scott

Divers still visit the Winnie, but they bring cameras instead of goodie bags. Everything is scattered over an acre of sand and rocks in five to 25 feet of water. Spokes of the paddle wheel are encased in the sand and a paddle shaft support protrudes from the kelp. Oak planks coated with copper sheathing are remarkably preserved near mounds of encrusted metal that stretch across a scatter trail. A garibaldi or two can usually be spotted cruising through the kelp and over rocky ledges that shelter spiny lobsters. Sheepshead, yellow tail and sea bass pass over wreckage that has accumulated significant marine growth. Average visibility is 15 to 20 feet in water temps that range from 60 to 65 degrees in the summer.

The Winfield Scott is one of 140 shipwrecks identified and documented in the Channel Islands National Park Marine Sanctuary. Two dozen or more have been discovered and charted. There aren’t many paddle wheel shipwrecks from the gold rush days remaining (see “Wrong Turn Sinks Gold Laden Paddle Wheeler,” Numa.net, March 27, 2017), making the Winnie a bucket list dive for history aficionados.