Nanking Cargo: Riches From the Orient 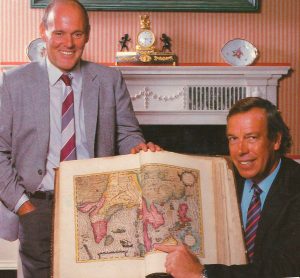 It’s the kingdom of power and awe where the winds wail, the gulls cry and the sea surges. Only the bold will brave it. Gales may blast it, rains may flood it and tides may churn it, but it is and always will be…the South China Sea.

Ask Michael Hatcher and he’ll tell you about raging storms, dark waters and pirates that he faced in an unforgiving environment unwilling to give up its treasure even to the bravest of souls. Hatcher never considered himself brave. Lucky perhaps, but not the daring swashbuckler portrayed in Hollywood productions. His demeanor, quiet, cordial and determined, was a perfect match for his line of work: Professional Treasure Hunter. 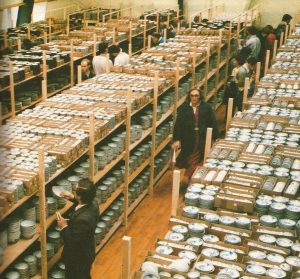 The South China Sea wasn’t unfamiliar to the Yorkshire, UK, orphan who grew up on a farm in the Australian outback. He picked up various jobs on land until age 27 when he bought his first boat. It took a lot of time and hard work, but by 1977 he had formed his own company and was salvaging scrap metal from sunken WWII vessels. Avoiding monsoons and standing up to modern-day pirates was standard operating procedure for the adventurer called “Hatch” by friends and crew.

Hatch greeted Lady Luck with a smile in 1983 when he stumbled upon a 17th century Chinese junk that went down on Admiral Stellingwerf Reef in the South China Sea. He and his crew salvaged more than 20,000 pieces of late Ming and Traditional Period Chinese porcelain that netted $2 million at Christie’s Auction House in Amsterdam. Hatch was ecstatic. Money to operate the boat, pay the crew and purchase high tech equipment was always a concern, but now he had the resources. Now he could make a mighty push in trying to locate the big “G.” 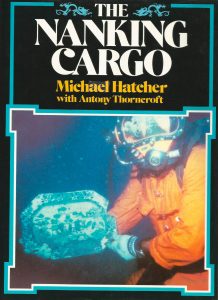 Cover of the Book, Nanking Cargo

The Geldermalsen, a Dutch East India company merchant vessel, sank in a storm in 1752. The 1,150 ton vessel was on a return voyage from Canton to Amsterdam laden with Chinese porcelain, tea, raw silk and gold. Accounts from the survivors verified the shipment along with records in Holland whose trade with Asia for two centuries was dubbed the Golden Age. Along with his partner, Max de Rham—an engineer skilled in high technology and marine surveys—Hatch researched the merchantman. Both agreed to begin the search in the area where the Chinese junk was found. Using satellite navigation, proton magnetometers and side-scan sonar, they swept a five mile perimeter, but came up empty handed. After two months of fruitless effort, Hatcher wanted to quit, but de Rham begged for one more day. Bingo! The very next day, May 11, 1985, the prize appeared on sonar—an image of a shipwreck showing mastheads, cannons and deck contours.

Hatch and de Rham were the first down and right off the bat found shards with the luster of cobalt blue beneath a ceramic glaze. Their expectations soared as pairs of dive teams uncovered crate upon crate of blue and white teacups, bowls, butter tubs, dinner plates, teapots and more. Serendipity kicked in when the divers realized the crates of porcelain had been cushioned upon impact by the bags of tea. More good fortune emerged when they recovered 127 gold bars in the captain’s cabin. 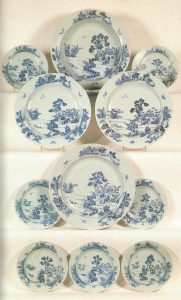 Sets of Porcelain Sold for Double the Expected Price

Diving conditions were hazardous. Silt swirled around as cargo was removed, forcing divers to work by feel. Large bags of tea leaves broke free from their containers prompting Hatch to declare, “It was like swimming around in a giant black teapot.” The 132-foot depth and dark waters were ominous. Using surface air supply, hoses had to be monitored and bottom time computed. Getting the bends was always possible, but the salvors were experienced divers who stressed safety first. Divers entered a decompression chamber after each turn on the wreck. Storms delayed progress and lookouts packing guns stood guard against interlopers. After 10 weeks of long hours and intense labor, a container ship arrived to haul off 1,400 cartons of the Hatch’s cache. Upon arrival in Holland, it took six people, working steadily for one month, to unpack, clean and stack more than 170,000 pieces of china.

The payoff came in April, 1986, when Christie’s of Amsterdam opened a five day auction of the “Nanking Cargo.” An official from Christie’s coined the name, Nanking, the main distribution center for Chinese porcelain shipped to Europe throughout the years. It had an appealing ring to it and helped prices soar beyond auction forecasts. More than 20,000 people attended the auction, many harboring a desperate desire to own a memento from this romantic treasure trove. An anonymous bidder paid $332,786 for a 144-place dinner setting, while a Swiss banker bought a pair of butter tubs for $15,275. A small stoneware jug went for $5,251. In all, the sale brought in $15.3 million, double the pre-auction estimates. Gold soared as well, netting a Midas touch that bordered on $2 million.

As for Hatch, the 45-year-old salvage entrepreneur, this was a happy moment, but one he never looked back upon. Like all steadfast adventurers, he went off searching for another wreck in the untamed South China Sea. When asked by a reporter to give up one of his secrets to success, he responded with one word: “experience.” His mantra throughout all of his exploits has been, “Experience is the best teacher.” That being the case, Hatch, the student, continues to earn straight A’s.