The lookout aboard the Orpheus barely saw the starboard lights on the PSS Pacific 300 yards ahead. He yelled to the helmsman to turn the clipper ship five degrees to port in order to avoid a collision. Meanwhile, aboard the Pacific, the lookout awoke from a nap and the helmsman was straining to see out of his dirty pilothouse window. Assuming he could reduce the stress on the hull if he side-swiped the other vessel, instead of striking it head-on, he turned his ship to starboard and sealed the fate of hundreds of passengers and crew.

The Orpheus, sailing in the darkness, struck the Pacific three glancing blows that ripped loose the chain plates (used to fasten a stay to the hull of a sailboat) on the windjammer, while destroying any structural integrity the old side-wheeler might have retained. As the vessels drifted apart, the Orpheus was unmanageable until the wind was dumped from her sails. The Pacific was still reeling from the blow as desperate passengers and crew tried to launch the lifeboats. Then, with a deafening crunch, the side-wheeler began to break up and sink in a massive whirlpool that took all but two aboard to their graves. 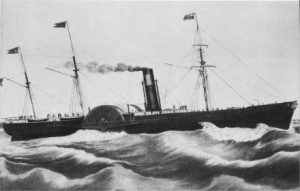 The total death toll was never determined due to the purser’s failure to keep an accurate account of how many passengers had boarded in Tacoma, Washington and Victoria, BC, Canada. The approximate count was 300 passengers and crew and the loss was recorded as the “worst maritime disaster in West Coast history.” Records also reveal a sizeable treasure went down with the ship.

The manifest listed the cargo, which included furs, hides, oats, opium, coal, cranberries, hardware, general merchandise and, in the purser’s safe, $78,000 worth of gold from several banks in Victoria. In addition to this repository, many miners who struck it rich in Tacoma had their caches with them. The ship, having set sail by way of Victoria for San Francisco, wasn’t out of port long before the mishap occurred. There was no storm, just heavy seas and darkness on the night of November 4, 1875. 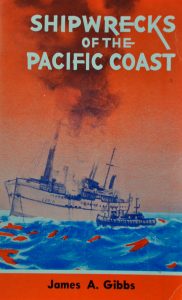 Shipwrecks of the Pacific Coast

Early in 1875, the shipping fleet of the west coast experienced a gold rush the likes of which wouldn’t be seen again until color was struck on the Klondike River in 1897. Officials from the North Pacific Transportation Company encouraged prospectors to head north to the Cassiar River Valley, British Columbia, aboard what the newspapers called, “some of the unlucky, bedeviled and unseaworthy ships on the west coast.” Unfortunately, the PSS Pacific was one of them.

Built in 1850 expressly for the coastal passenger and cargo trade, she sailed for 26 years under flags of seven merchant lines on both sides of the Rockies. By 1872, the Pacific was so old, rotten and slow, the owners sent her to San Francisco for demolition. But when they learned about the gold strike in British Columbia, their ship earned a second life. They put her back into service and falsely claimed that the picturesque side wheeler had been “completely rebuilt.” 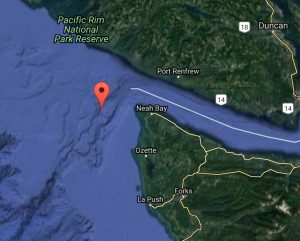 Steaming out of the Strait of Juan de Fuca, near Cape Flattery and Neah Bay, the steamer faced no gales, hurricanes, fires or leaking bilges. The collision, which occurred about 12 miles offshore, appeared to be of little consequence at first. But like many disasters at sea, unforeseen incidents ensued and the Pacific joined more than 100 other ships that sank along the same coast throughout the years. The gold has never been found and may never be recovered. The wooden hull has rotted away, visibility is poor and currents are strong at a depth of 100 feet. Ships coming out of the strait are also a hazard. The former proud coastal passenger ship remains one more casualty in the Graveyard of the Pacific.

Note: For more information on this vessel and others, go to: Shipwrecks of the Pacific Coast by James A. Gibbs, Binford & Mort Publishing Co., 1981.