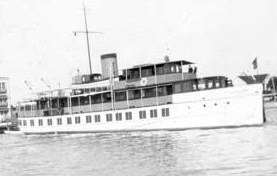 “The Greatest Show on Earth” may no longer be the circus, but could be something connected to it during the Roaring Twenties. In 1922, people weren’t surprised when John Ringling of the Ringling Bros. and Barnum & Bailey Circus launched his lush $200,000 yacht, Zalophus, (Greek for Sea Lion). Known as the “Father of Modern Circuses,” he was not only raking in dough from performances by acrobats and clowns, he was making big bucks selling real estate off Florida’s Gulf Coast.

That’s where the 125-foot palatial yacht came in. Ringling used it to wine, dine and usher millionaire friends to Sarasota Bay’s barrier islands where he planned future development. The 125-foot pleasure craft had six spacious staterooms, five bathrooms with brass bathtubs and additional space for the attendant maids and valets. Ship historian David Weeks wrote, “The yacht’s furnishings and décor were lavish enough to satisfy Ringling and his wife’s taste for opulence and fine detail…so fine that some guests may have found it all to be a bit bizarre.”

The Zalophus sailed the Gulf for eight years until one morning at 3 a.m., February 4, 1930, when it struck a partially submerged metal object that ripped a hole in the hull. The captain and crew acted quickly as the vessel took on water, lowering the lifeboats and delivering all guests safely to the beach only a mile away. Ringling and his wife weren’t aboard the yacht, but several of Sarasota’s rich and famous survivors were interviewed the next day. One, Samuel Gumpertz, was the creator of New York’s Coney Island Amusement Park. Another, William Greve, was the imposing president of Prudence Bond Company. What the Sarasota Herald didn’t report was the presence of New York Mayor Jimmy Walker and his mistress, notable Broadway actress Bettie Crompton. Their tryst wasn’t divulged until nearly three decades later. 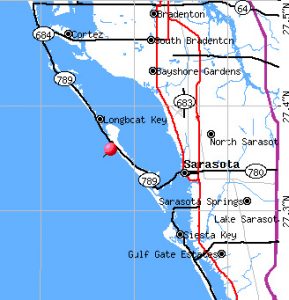 Ringling collected on a $100,000 insurance claim and then expressed interest in buying back the devalued remains sunk in 15 feet of water near Lido Key. He said he wanted to salvage the two diesel engines and paid the Cubbedge-Walpole Insurance Company in Sarasota $10,000 for the salvage rights. That’s when the mystery of the Zalophus surfaced. The engines weren’t worth what he paid for them. He spent additional money for barges and a salvage crew, leading to speculation that he wanted to secretly recover something valuable left in the remains. But seven months of salvage efforts produced an empty shell of a hull battered by storms, tides and currents. The vast majority of its contents remained buried beneath the sand. Locals still wonder if there’s a secret submerged in the shallow water site located not too far from the beach.

“Oh, there’s something valuable on that site, but it’s buried under eight to ten feet of sand,” says Capt. Carl Fismer—better known as the Fizz—of Islamorada, Florida. Owner and operator of the Spanish Main Treasure Company, he is to shipwrecks what Sir Edmund Hillary was to mountaineering. In over 40 years of underwater exploration, the Fizz has discovered hundreds of wrecks including Spanish galleons, Civil War blockade runners, pirate vessels, a slave ship and much more. Now he can add one more notch to his list of discoveries if funds become available to seek the remains of the Ringling craft and possibly solve its mystery. 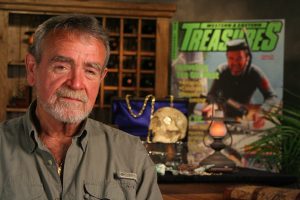 “I found the wreck site some years ago,” Fizz reveals. “There was dredging going on in those days to replenish the beach. Sailing in the dark, wee hours, the boat struck one of the big metal drums that supported the suction and discharge hoses of the dredge. The supports were big and bulky, resembling hot water heaters. When I found one sticking out of the sand, I knew I was on to something. It had a big dent in it! Upon further investigation, I found some of the cable Ringling used for his phone that ran from the beach to the barges. To me, this was more evidence that he was interested in something other than those two engines.”

Fismer speculates that in addition to something very valuable—such as a strongbox—many opulent items were aboard. “Opulent” was a word Ringling’s wife, Mable, used frequently. Justifiably so, she packed the boat with fine china, oriental porcelain, Tiffany tea sets, Stieff silverware, marble sculptures, bronze busts and other precious possessions. All the bathrooms had fourteen carat gold plated fixtures. In their rush to board the lifeboats, guests had little time to retrieve jewelry and other personal belongings.

No doubt there’s interest in salvage, but no funds are forthcoming. Fismer and his friend, Harvey Kaltsas, tried to raise money for an expedition, but had little luck. Salvors need a reliable boat equipped with sidescan sonar, magnetometers, air lifts, an able crew and divers who will spend many hours on the bottom. There’s also the state of Florida to deal with. It’s never an easy task to obtain a permit, even though the state gets 25 per cent of anything valuable and first choice of museum display pieces that are salvaged. As the Fizmer mentions in his best selling book: Uncharted Waters—The Life and Times of Captain Fizz, “Treasure is Trouble.” Yet, the real trouble is that not enough people are willing to invest in an enigma that emerged from John Ringling’s unexplained desire to seek something out of the wreckage other than two paltry engines. But again, “Treasure is Trouble” and the “Greatest Show on Earth” might remain forever under the soggy Sarasota sands.