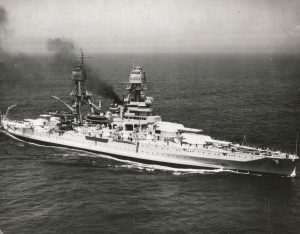 December 7, 2016, commemorated the 75th anniversary of the surprise Japanese attack on the U.S. Naval Base at Pearl Harbor, Oahu, Hawaii. Proclaimed “a date which will live in infamy,” by President Franklin D. Roosevelt, it marked the entry of the United States into World War II.

At battle’s end, 2,403 military and civilian personnel died, more than 1,000 were wounded and 18 ships were lost. The early Sunday morning attack came from 355 warplanes that attacked in two waves from six aircraft carriers of the Japanese Imperial Fleet. The attack was so staggering and swift, our forces could get very few airplanes off the ground. Our ships needed an hour or more to fire up their boilers thus deferring any strategy to make a run for it.

Of the more than 2,000 causalities that fateful day, 1,177 of them were from the Pennsylvania Class Super Battleship, USS Arizona. The 608-foot-long, 33,400-ton flagship of the U.S. Pacific Fleet was a floating fortress armed with four massive turrets and a dozen 14-inch guns. Yet, it was no match for the unforeseen armor piercing bomb that obliterated the bow and ignited fires and explosions throughout the ship. 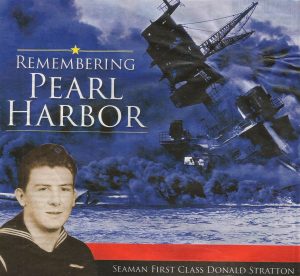 Ninety-five-year-old Lou Conter, a retired Navy Lieutenant Commander, attended a ceremony at the site on December 7. Gazing solemnly at the wreckage, he recalled, “There were 365 of us on the ship that were spared. Many of us stayed in touch over the years and only five are still around. Ninety-four-year-old Donald Stratton is one of them.”

Stratton’s memoir, All the Gallant Men, was released recently by the William Morrow Company. Written with co-author Ken Gire, it recounts the nightmare of sounds, smells and devastation experienced by the 19-year-old Seaman First Class as he manned an anti-aircraft gun on the port side of the ship.

“Japanese Zeros,” Stratton recalls, “embellished with images of the Rising Sun on the fuselage, were dropping bombs and torpedoes everywhere. But they were flying so low, we risked hitting the USS Vestal anchored on one side of us and our own men on the other. Frustrated and eager to retaliate, we set our sights on the bombers, but soon realized they were too high to hit. Unable to engage them, we became sitting ducks. The entire fleet was being destroyed before our eyes.”

Burned badly by the flaming oil soaked deck but still mobile, Stratton and others from his gunnery team escaped by scrambling across a 70-foot-long rope stretched 45 feet above blazing waters. With burns covering 65 percent of his body, it took him a year to heal and walk again. Eager to avenge his vanquished shipmates, Stratton returned to active duty in another navy battle zone.

The ship sank at the dock, too far gone to be saved. Navy divers recovered 200 bodies from the wreckage, but the rest remain undiscovered in the war grave sanctuary. Declared a national monument, it remains one of the most popular attractions in the state hosting more than a million tourists yearly. Arriving at Kilo Pier aboard a Navy shuttle boat, visitors step into an attractive structure built over the ship without touching it. Ushered into Memorial Theater, they’re treated to a 75-minute program which includes a 23-minute documentary about Pearl Harbor. Before leaving, small groups gather around the viewing well where they gaze down at part of the sunken wreckage.

The site, managed by the National Park Service (NPS) is examined periodically by underwater archaeologists who look for weaknesses in its structural integrity. They also check on seepage of fuel oil from the bunkers in the deteriorating hull. To reach them would entail removal of large sections of the ship which would in turn cause intrusion into a war grave.

Dave Conlin, a NPS archaeologist who has visited the wreck many times says, “We’re trying to protect the remains of the ship and its crew. We’re not allowed to enter the grave site except for inspections, which can be confusing and disorientating. Visibility is poor, so we survey it through ‘vignettes’ that range from battle stations to living and recreational quarters. Swimming toward the bow for instance, we spot the intact number one turret. Larger than a bus, it rests there thinly veiled and ghostly in the murky water. The remains of the other three turrets were salvaged and used on other battleships.”

Conlin says there’s not much shape remaining to major parts of the vessel. Much of it is twisted and torn from the 1,400 lb. bomb that pierced the 13-inch-thick armor. Cables, anchor chains, pipes and steel plates litter the forecastle deck. Hull plates, covered with algae and mollusks, are blown out 20 feet away. Sponges grow on gun muzzles that protrude from the remaining turret. At midship, near the stack, twisted steel plates overlap mangled wooden and metal decks. Hexagonal tiles, eating utensils, silverware and coffee mugs cover the port galley deck. Empty lifeboat cradles remain astride open hatches leading to dingy darkness. Unexploded four-inch shells are strewn about the harbor bottom. The raised letters, “Arizona,” remains on the fantail.

Everything that remains on the ship is monitored and recorded through photographs, drawings, videos and digital mapping. Preservationists and historians hope the mighty warship can hold its own so that visitors can continue to honor the brave men lost in battle, while comprehending the ravages of war.

For more information go to: www.historynet.com/pearl-harbor.