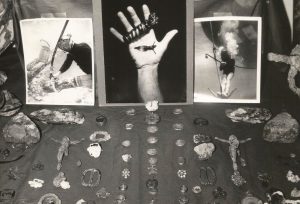 Mel Fisher is known as the “Dean” of treasure salvors, but the late Art McKee remains the “Father” of the fraternity. A treasure diving pioneer in the 1940s and 50s, he found nine of 20 wrecks from the Spanish Armada of 1733, all hurricane victims in the Florida Straits. McKee goes so far back, he used the old Miller-Dunn diving helmet to uncover treasure in the middle and upper keys where menacing sites such as Coffins Patch, Marathon, Florida, would have frightened away the faint of heart. Upon retrieving so much treasure and so many artifacts from the Capitana el Rui, El Infante, San Pedro and San Ignacio, he had to build a museum to store and display it all. 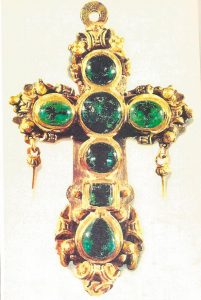 The late Chuck Mitchell made an amazing discovery at Coffins Patch in 1968. While hand-fanning the sand beneath the ballast stones of the San Ignacio, he uncovered two miniature pewter cannons, seven inches long, weighing two pounds each. Known as the “noon cannons,” they were set on gimbals (pivoting supports) at the helm of the ship with a magnifying glass focused on their fuse train touch holes. When the sun was directly overhead, it lit the fuses and fired a black powder salute that signaled the pilot to take the noon sun setting with his astrolabe–an early nautical instrument. The cannons became so rare and priceless, Mitchell stored them in a Miami bank vault until they eventually were sold to a museum.

Treasure ships are not limited to the Spanish Main, a term used to describe the Florida coast and armadas sunk off its shores. Some ships made it to the Bahamas, where Robert Marx found the remains of the Nuestra Senora de Las Maravillas on the Little Bahama Banks in 1972. The 1656 almirante (capitanas led the armada while almirantes brought up the rear) gave up five tons of silver bars, 50,000 silver coins and 100 gold pieces, all bound for King Philip IV’s repository. But Marx had a disagreement with the Bahamian government on the division of the treasure and left the site. Other salvors came later, but none matched the accomplishments of Marex International’s Herbert “Herbo” Humphreys. The Memphis shopping mall developer worked the wreck in the 1980s and 90s, retrieving a fortune in gold and silver coins and bars. Yet the crème de la crème of all his discoveries wasn’t coin or bullion. It was a dazzling windfall consisting of two magnificent pieces of jewelry, one an ornate gold cross set with 66 emeralds and the other a gold brooch adorned with 80 emeralds. 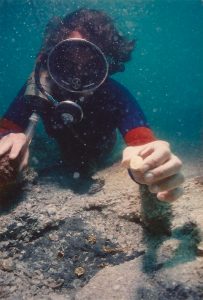 Humphreys’ find was reminiscent of Bermuda salvor Teddy Tucker’s illustrious “Tucker Cross.” Hailed as one of the finest treasures ever uncovered, the emerald studded gold cross was plucked from the sand while Tucker was exploring the San Pedro, a galleon sunk off Bermuda in 1595. On display at the Bermuda Underwater Exploration Institute for 14 years, the cross was mysteriously stolen in 1975 and has never been recovered. The museum replaced it with a replica.

All of the treasure ships weren’t sailing back to Spain. Barry Clifford, a Martha’s Vineyard real estate developer turned treasure hunter, found the Whidah, Black Sam Bellamy’s pirate vessel sunk off Wellfleet, Cape Cod, Massachusetts. The 18-gun flagship, loaded with buccaneer booty, sank in shallow water during a fierce northeaster in 1717. With the late John F. Kennedy, Jr., accompanying him, Clifford and his crew found thousands of silver coins, a 3,000-pound cannon and countless weapons and projectiles. Clifford, like most modern-day treasure hunters, used high tech electronic sensing tools such as sidescan sonar and magnetometers to locate his prize. 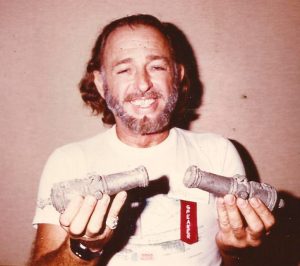 Treasure discoveries, however, are no longer “finder’s keepers” as was the case in Art McKee’s day. Fisher fought and eventually was awarded title to salvage the Atocha after federal courts ruled that the Spanish crown had lost title for failing to return to the vessel for more than three centuries. This was adjudicated under U.S. Admiralty Law, an impartial “law of finds” ruling that had been around for 200 years. However, a small group of state and federal bureaucrats, backed by professional archaeologists, doggedly advocated legislation to change Admiralty Law. It took them 10 years, battling salvors and recreational divers, but the proponents of change won with the passage of the Abandoned Shipwreck Act (ASA) of 1988. The former “law of finds” was pushed out in favor of the “three mile limit.” The ASA declares that all abandoned shipwrecks found beneath state waters—including rivers, bays, harbors and lakes or up to three miles offshore in the oceans—become the property of the state in whose waters the shipwreck is discovered.

Unfortunately, a majority of treasure ships lie on reefs and shoals in shallow waters within the three-mile jurisdiction. Although the ASA doesn’t ban divers from the wrecks, it does impose a rigid code of rules and regulations when a discovery is made. These include being issued a claim accompanied by strict provisions for the division of the treasure between the salvor and the state. An archaeologist, approved by the state, must accompany the salvage vessel on all searches.

Are you ready to track the trail of sunken treasure? Are you challenged by the excitement, adventure and wealth that await below the surface of the seas that entomb countless treasure ships throughout the world? If so, there’s an abundance of info out there including books, journals, magazines, DVDs and the Internet, all suggesting how and where to begin. But be forewarned, as Bob Weller so aptly put it, “With blood, sweat, money and technology, the diver works a treasure site until frustration and endurance become inseparable. Almost as the decision is made to toss it all, the sea gives up some of it treasure….and then you’re hooked.”