Shy Savannah is Sanctuary for Shipwrecks 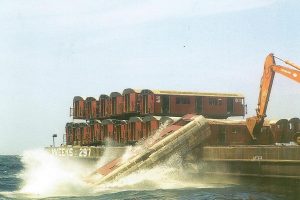 Subway cars from one of many artificial reefs.

Why is Savannah so shy in promoting its excellent dive sites which haven’t been reviewed in scuba diving publications for years? And why does it seem to be a best kept secret, sort of like a dark horse that gallops in the shadows of a plethora of enticing shipwrecks?

“Lots of reasons,” says Capt. Jerry Sapp, a former U.S. Navy diver who operated a dive charter boat for more than 25 years. “First of all, our best diving is 30 to 50 miles offshore where clear, warm waters veer in from the Gulf Stream to attract fish and other marine life to our wrecks. Experienced divers, especially those who spearfish, know our sites. They’re used to the two to three-hour boat rides, strong currents and increased charter prices. Basically, we’re talking about experienced, hard-core divers who want to chase Goliath grouper, snapper, mackerel and amberjack, just to name a few of the popular species. Divers encounter everything from lobsters to turtles, sharks, barracuda, stingrays, bottle-nosed dolphins and much more. It’s all in 80 to 130 feet of pristine waters.” 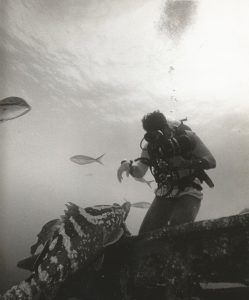 The gulf stream attracts groupers and other large pelagics.

Savannah’s wrecks are mostly artificial reefs put down over the years to attract marine life and foster the diving and fishing industries. Divers often begin diving on three vessels: the A.B. Daniels, Elmira and Sagebrush, all within one mile of each other. The Daniels, a 441-foot-long liberty ship, was split in two by hurricane David in 1979. Settled in 50 to 80 feet of water, it’s a popular offshore site for divers and fishermen. Liberty ships were mass produced in the 1940s during the height of World War II. They carried desperately needed cargoes of munitions and stores to remote corners of the war torn world. After the war, many were sold for scrap while those placed in mothballs returned in the mid-1970s when reef building programs became popular. Although its superstructure was stripped before sinking, the Daniels retains massive storage compartments to explore. Divers swim freely throughout the hull where tropical and sport fish abound in waters that average 30 to 40 foot visibility. Spearfishing enthusiasts seek groupers and flounder that hide in the shadows of the big washout holes formed where the keel settles into the sand. 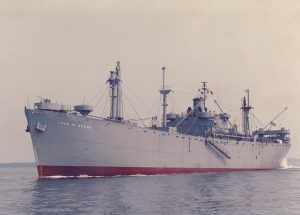 The superstructure has been salvaged on the A.B. Daniels but this liberty ship shows size of the remaining hull.

Nearby, off the J-Reef Buoy, lie the remains of the Elmira which first served as a ferryboat and later as a tug. It’s small compared to a liberty ship, but serves photographers and spearfishing aficionados with a variety of settings and targets including sheepshead, sea bass and the vessel’s wheelhouse. The Sagebrush, third in this triple threat, rests in 80 feet, its boiler rising to within 30 feet of the surface. Deck plates, gears, chains and partial superstructure provide appealing backdrops for photos. A barge on the J-Reef draws a double-take from divers when they spot a complete van welded to the deck. As one diver said: “It probably didn’t pass the motor vehicles inspection!” This same area, 14 miles offshore, retains a natural aquatic terrain with three-foot high coral encrusted ledges rising from the sand. Divers who’ve experienced North Carolina waters aren’t surprised by the diversity of marine life in waters off the Peach State. Warm waters from the Gulf Stream enable polyps to form reefs of hard and soft corals. Brain and star corals, sea fans, sponges and anemones are common and it’s not unusual to spot stingrays, sharks and moray eels here. Schools of amberjack circle the perimeter and loggerhead or leatherback turtles often veer in from deep waters. 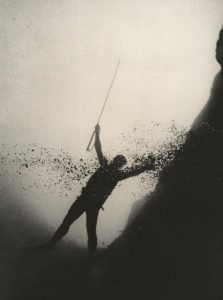 Spearfishing is popular on Savannah’s wrecks and reefs.

Unfortunately, the only two dive shops in Savannah don’t offer charters to the reefs and wrecks. They advertise dive travel which consists of trips to Florida and the Caribbean. This leaves the hard core divers to seek a commercial fishing boat captain who might take them out or they can trailer their own boat and use one of the many launching ramps available at convenient locations. Go to gafishingspots.com to obtain maps, GPS coordinates and mobile apps.

As artificial reefs continue to be scuttled offshore and the Gulf Stream dispatches myriads of fish and marine life to the wrecks, shy Savannah might blossom—like her state’s peach trees—and be discovered as a popular East Coast dive sanctuary.