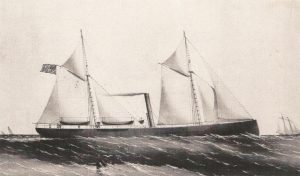 The Francis Wright under sail.

“Is she is or is she ain’t my baby? Is my baby still my baby now?!” This refrain from an old ditty could be the theme song for a select group of East Coast divers who think they’ve found the remains of the Francis Wright. Or, could it be the Alexander Oldham?

The debate began over a site some call the “Gem of New Jersey,” or better still the “Emerald Wreck,” a small coastal freighter discovered in the early 1970s by George Hoffman and Charlie Stratton. Hoffman salvaged tons of copper and brass, all affected by a salt water chemical reaction that turned everything “emerald green.” Other divers have salvaged green glass ginger ale bottles that “glisten like emeralds” when cleaned and displayed. 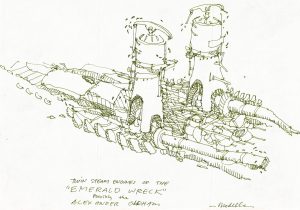 Located 11 miles from Manasquan Inlet, New Jersey, the remains of the 1800s steamer are strung out in water 80 feet deep. Delving into the ship’s history was a challenge for Rick Anderson who salvaged a plank engraved: Edwards and Hall Family Soaps, Wilmington, NC. His research revealed the company operated out of Wilmington from 1871 to 1875 and shipped goods on the Alexander Oldham, a 66-ton wooden steamship that sank in 1873. Records list the loss as “site unknown.”

As other Middle-Atlantic divers, many of them New Jersey “brass hounds,” joined the debate, crazy things evolved. Jeff Bonnell, a supporter of the Wright group, visited a psychic who came to two conclusions after examining his clocks, portholes, ax heads, combs, kitchen utensils and oil lamps. First, she assured him he was aboard the vessel in a past life and second, no lives were lost in the disaster. Bonnell left smiling and uncovered evidence later that the Francis Wright originally was the USS Hibiscus, an 1864 Union Navy gunboat built in Fairfield, Connecticut. 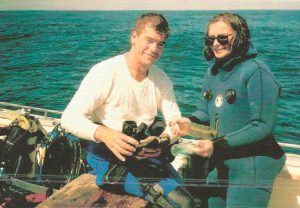 Capt. Steve Nagiewicz salvaged some naval emblems from the wreck which reinforced the Hibiscus theory even though the vessel had been sold to merchant John S. Wright in 1866. The 406-ton Francis Wright appears in the Lytle List of Merchant Vessels for 1873 as sailing from New York to Wilmington and lost off the New Jersey coast, “site unknown.” Nagiewicz retrieved cheese crates, dried fish, water kegs and barrel heads, some dated 1872 and all in the ballpark of the ship’s purported sinking.

Mark Patterson and Greg Modell, Alexander Oldham believers, used scooters to blow holes in the silt near the bow where they found most of their artifacts. The Oldham is recorded in Losses of U.S. Merchant Steam Vessels in 1873, the same year as the loss of the Francis Wright. It‘s also listed as “site unknown.” Modell describes the ship’s engines as “standing side by side, six to eight feet tall.” He says the shafts are broken off, one prop lying in the sand, the other one missing. He adds, “It’s not the disagreement over the name of the ship or the allure of the artifacts that counts. What really matters is the camaraderie and common interest that has continued for years.” 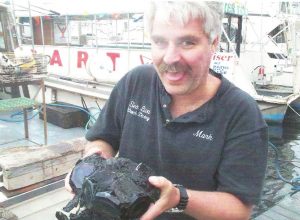 Mark Paterson with a clump of ink bottles.

Enrique Alvarez, a veteran of countless dives on the Emerald Wreck, is an Alexander Oldham fan. Like Rick Anderson, he bases his theory on crates of soap he found with a South Carolina company name on them. He says the company shipped goods to northern ports on six ships, two of which sank. He believes that one is the Oldham. Among many interesting artifacts Alvarez and dive buddy Nancy Everly salvaged were ginger ale bottles made in Belfast, Ireland, still carbonated when opened.

In his book, Shipwrecks of New Jersey, Gary Gentile says the Emerald Wreck is the Francis Wright. He says twin screw vessels were almost unheard of in the 1860s when the development of steam propulsion was still in its early stages. Records show the shaft on the port prop broke off causing the ship to sink. Both the port prop and shaft are missing. Gentile also points to the size of the Wright: 165 feet compared to the smaller 81-foot-long Oldham. The latter was only 66 tons compared to the Wright’s 406 tons. Although the author says the evidence is not conclusive, some of the salvaged items are in the same time line as the Wright’s shipping history.

Veteran charter boat Capt. Dan Berg, frequent visitor to the wreck says, “It’s one of the most popular inshore sites still serving a smorgasbord of artifacts.” It’s amazing that divers have found entire crates of bottles, shoes, china and keg taps in addition to other memorabilia. This little coastal freighter has sparked additional interest in the history and mystery of other wrecks off our New Jersey shore.”