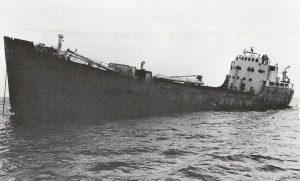 Theo Galanopoulos isn’t exactly a household name in diving, but thanks to him, thousands of divers have visited one of the best dive sites in the Bahama Islands. His efforts to save a rusting hulk from the wrecking ball have been lauded for more than 30 years. Naming the wreck after him was a no-brainer, otherwise divers would have visited the M/V Island Cement or the M/S Logna—two official names given to the ship over its 28-years of service.

The 230-foot steel hull freighter was launched in Norway in 1954 and christened M/S Logna. It transported general cargo between Norway and Spain until 1969 when it was sold to the Island Cement Company, Freeport, Grand Bahama Island, where it was converted to a bulk carrier. Renamed M/V Island Cement, the vessel hauled sand, gravel and cement from Florida to its port of entry, New Providence (Nassau) and other islands. 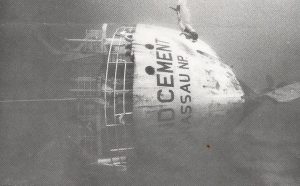 By 1981, the ship was in disrepair and company officials decided to sell it for scrap. But Theo Galanopoulos , a company employee who happened to be a scuba diver, had a better idea. Why not sink it offshore as an artificial reef that recreational divers and fishermen could enjoy? He pointed out that scrap metal profits were low. In addition, rules and regulations in prepping the vessel weren’t worth the time and trouble. He assured his bosses that the local Underwater Explorers Society (UNEXSO) founded in 1965, was fully staffed, maintained a reputation for safety and attracted divers worldwide. Sure enough, when approached, its executive officers embraced the idea, cleaned up the ship for divers and obtained permits for scuttling it.

On October 16, 1982, divers from UNEXSO accompanied by Theo, sank the 1,444-ton freighter in100 feet of water about a mile and a half off Silver Beach Inlet. The task took four hours, the vessel settling on her port side, the stern resting near the edge of a 2,000-foot drop-off. Fifty feet more and Theo’s Wreck would have slipped off the island’s continental self. 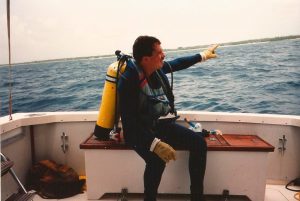 My dive buddy, Carl Panzarella, and I made two dives on the wreck, which was exactly how UNEXSO divemaster Gary Ruhl described her: “Big and clean with a pilot house and two large cargo hatches to explore.” He added, “Don’t miss the abyss.” This was the drop-off Carl designated “a mystical experience.”

On our first dive, clinging to the rudder near the wall, we gazed into the azure void where the sun’s bright rays lit up the crystal clear water before plunging into deep darkness. It wasn’t quite an out-of-body-experience, yet it was beyond ordinary, perhaps spiritual. It inspired deep thought (no pun intended) and remains an unexpected, extraordinary encounter. 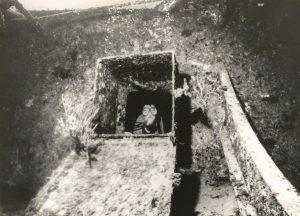 The wreck, encrusted with gorgonians, fire coral and assorted marine life, is home to a variety of tropical fish. Blue tangs circle the anchor chain, while French angelfish cruise over winches on the quarterdeck. Parrotfish nibble on algae growing along the catwalk. Horse-eye jacks, silversides and striped grunts school on the upper deck and over a capstan. Alert divers might spot a grouper, moray eel or lobster hiding in the shadows of the engine room. Photographers relish the large, windowless portholes in the pilothouse where dive buddies peer out to be framed for future power point presentations. A lone barracuda hangs motionless near the ledge where pelagics from the deep such as turtles, rays or sharks, might appear.

“Theo’s funhouse,” as one diver puts it, presents a medley of marine life in 80 to 100 feet of water. Unfortunately, time passes quickly when you’re having fun. Before departing, some divers like to return to the stern for one more peek out from the ledge and into the blue, offering thanks to Theo and UNEXSO for a memorable encounter.