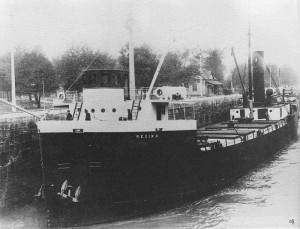 When commercial diver Wayne Brusate discovered the remains of the SS Regina—a victim of the Great Storm on the Great Lakes—he dubbed it the “good luck wreck.” Boxes of horseshoes and other salvaged artifacts symbolized a lucky streak for him, but not for the Canadian package freighter. The ship, its cargo and all hands—15 including the captain—were lost in Lake Huron off Pt. Sanilac, Michigan, in early November, 1913.

Bad luck seemed to shadow 34-year-old Capt. Ed McConkey. The Regina was his first command on the company’s last voyage of the season. But he wasn’t the only unlucky mariner to sail on that fateful day. Many other Great Lakes’ captains skipped the day’s storm warnings and hauled anchor for just one more trip. In one of the worst storms ever, 19 vessels in four of the five lakes went down, eight of them in Lake Huron. More than 250 men were lost. 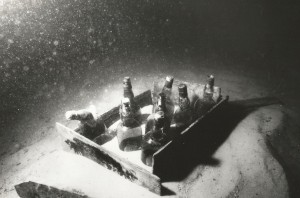 Bottles of whiskey and champagne were found on the wreck. Credit: Wayne Brusate

Capt. McConkey’s 249-foot freighter was like a general store carrying thousands of supplies to numerous ports. Boxes and barrels were tightly secured, but when 140-tons of baled hay got wet, the ship became top-heavy. The storm’s 35-foot waves and 60 mph winds did her in as she settled on the bottom upside-down.

In 1986, Brusate was operating commercial Divers and Marine Services out of Marysville, Michigan, and searching for a tugboat when serendipity kicked in. His side scan sonar revealed a dark image much larger than a harbor tug. A couple of bounce dives and a name on the ship’s bell divulged the wreck as the “mystery freighter” divers could never locate. Within a year, the Marysville hero had made his claim, secured permits and signed an agreement with the Michigan State Dept. of Natural Resources for the division of antiquities and general merchandise yet to be recovered. With help from Freedom Marine Salvage, Vancouver, B.C., Canada, Brusate and a hand-picked dive team began the arduous task of “shopping” in the general store. 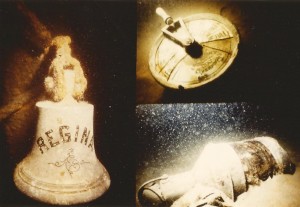 The Regina’s bell, telegraph, and lantern. Telegraph reveals the captain had shut down her steam engines before she sank.

“The cold fresh water was kind to the vessel and its cargo throughout the years,” Brusate recalled. “It was awkward diving on an upside-down wreck, but became advantageous when we spotted crates and barrels that simply fell out of the hold on to the bottom of the lake.”

In the beginning, discoveries of sewer pipes and light fixtures weren’t very exciting, nor were medicine, perfume and Heinz Ketchup bottles scattered among mustard pots and little brown jugs. The “ah-ha” ‘moment came when divers worked their way up into the hold and chanced upon a spirited bounty of aged liquor and wines. They found $33,000 worth (in 1913 dollars) of Mumm and Veuve Clicquot Gold Label champagne, the long necks still glistening with pink foil identifying the French treat. Divers soon learned to slap rubber bands on the corks, or else they would pop a few moments after reaching the surface due to changes in temperature and pressure. Later, officials at Christie’s Auction House, where the champagne was sold, had to taste it before offering it for sale. Like Brusate when he first sipped it, they were delighted with its aged flavor. They had the same happy experience with dozens of cases of Dewar’s and Whyte and Mackay Scotch whiskey that were part of the cargo.

More than $80,000 in gold coins were purported to have been stored in the ship’s safe. Today, they would be worth a fortune not just for the gold, but for their value as collectors’ pieces as well. In frequent return trips, divers never found the safe, but they uncovered more scotch and champagne. Oh, and more horseshoes too!

Note: Artifacts retrieved from the Regina are on display at: the Great Lakes Maritime Institute and Dossin Great Lakes Museum, Detroit, Michigan, and the Port Huron Museum, Port Huron, MI.