Shipwrecks of the Chesapeake 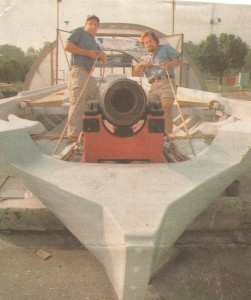 John Kellett & Jesse Levovics of Bladensburg, MD position the bow cannon of a replica of one of Barney’s Barges. Barney sank his flotilla to avoid its capture.

An estimated 1,800 wrecked or abandoned ships, sailing during Colonial times to modern days, lie on the bottom of the Chesapeake Bay and its tributaries. From the Susquehanna River to Cape Charles, they foundered in storms, ran aground, blew up, were rammed, ice-crushed or scuttled. Schooners, sloops, steamers, ferries, frigates, freighters, barks, bugeyes and barges met their fates in murky waters that claimed passengers, crews and cargoes.

The Mallows Bay Ghost Fleet comprises one of the largest maritime graveyards in North America. Hardly a bay, it’s just a narrow gouge in the shore along the Potomac River, Charles County, Maryland, but shelters nearly 100 shipwrecks in its shallow, dark waters. Nicknamed the “Ghost Fleet,” this depository of wooden steamships was hastily built during World War I when President Woodrow Wilson ordered them to be constructed in a hurry to thwart marauding German submarines. Ninety were christened in one day in 1917, but ran into trouble when their coal-burning engines were rendered obsolete by diesel power. By the time the war ended in 1918, no one wanted the vessels which were salvaged for parts and then scuttled. Throughout the years they became shallow water derelicts with trees and bushes replacing rotted wooden decks. But recently, they acquired a new life. The Federal Government, recognizing the area’s historical and ecological significance, declared the area a National Marine Sanctuary. Now, visitors can explore the 14-square-miles of land and water, some of them opting to kayak or canoe past these hulks of another heyday. 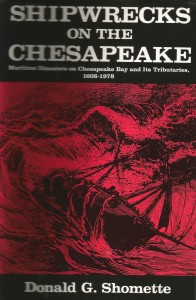 Shipwrecks of the Chesapeake

History lives in the Chesapeake where the War of 1812 played a major role. Native Marylander Joshua Barney, a hero in the Revolutionary War, was a staunch defender of the Bay when the British were attacking it in the summer of 1814. Barney, with approval from the Secretary of the Navy, constructed and restored 18 vessels called the Chesapeake Flotilla to battle the British when they came up the Patuxent River. Many of the vessels looked liked enlarged rowboats propelled by men rowing two abreast with 16-foot oars. Others manned the cannons at the bow and stern.

When British General Robert Ross sailed up the river with his ships and thousands of soldiers, Barney and his men fought valiantly, but had to scuttle the fleet to prevent its capture. The flotilla, called “Barney’s Barges,” rests on the bottom of the Patuxent, a reminder of heroic efforts to defend our land and waters.

Not to be forgotten, Barney’s legend has been resurrected by local shipwrights John Kellett and Jess Lebovics who built a replica of one of the barges as part of the 300th birthday celebration of Prince George’s County. Docked at the Bladensburg waterfront, the boat remains a tourist attraction as well as a teaching vessel for Baltimore’s Living Class Foundation. 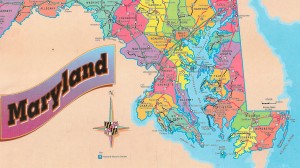 The historic Mallows site and Barney’s Flotilla are protected by state and federal laws, but sport divers retrieve artifacts from later wrecks such as the steamship New Jersey. The Old Bay Line’s vessel caught fire while on a general freight run from Baltimore to Norfolk, Virginia, sinking in 80 feet of water eight miles from the western shoreline of the upper Bay. Divers brave the nearly zero visibility waters to salvage the milk-glass molasses and hobnail syrup pitchers still in the hold. They named it the “Pitcher Wreck” after its discovery in 1975.

The three-masted schooner Levin J. Marvel, converted from a cargo carrier to a passenger ship with 17 staterooms, sank in August, 1955, a victim of Hurricane Connie. Winds and waves rolled it over in the shallow waters of Holland Bay, Calvert County, Maryland. Fourteen of the 27 passengers perished. Six of the survivors sought refuge in a duck blind that was washed away right after they were rescued.

The Herbert D. Maxwell, a handsome four-masted schooner, was rammed by the steamer SS Gloucester during a storm in 1812. It sank in 70 feet of water off Kent Island, near what is now the Chesapeake Bay Bridge.

The list continues: hundreds of ships lost over hundreds of years. Much of it is chronicled in an outstanding book: Shipwrecks on the Chesapeake by Donald G. Shomette. The author has visited many of the Chesapeake’s wrecks and uses his first hand knowledge and extensive research to capture these epochs of bygone days.