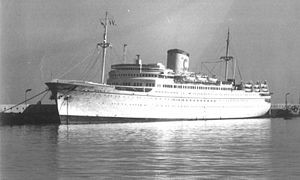 While some divers consider the demise of the Bianca-C, an “unlucky break,” others call it just plain stupidity. At any rate, it has provided them with one of the best shipwreck dives in the Caribbean.

When the 600-foot-long cruise ship caught fire in October, 1961, while anchored in the harbor at St. Georges, Grenada, it appeared that standard procedures could douse it quickly. But that didn’t happen as the engine room blaze spread, a result of inadequate fire-fighting equipment. A boiler explosion was blamed for the fire which began upon the start-up of one of the diesel engines. Three of the ship’s crew died and eight others were injured during the explosion and fire. Seven hundred of the vessel’s passengers and crew were saved, many of them by local residents who launched an armada of anything and everything that floated. The rescue efforts took two hours, while explosions burst below decks and smoke poured from the hatches. 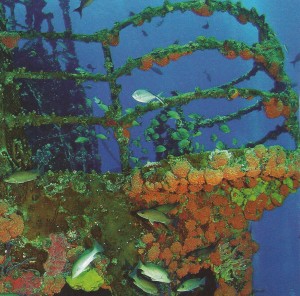 A camp was set up near the shore where those in temporary need of care were accommodated. Some of the islanders supplied food, clothing and housing for the survivors until they could leave the island. Meanwhile, the ship burned for 48 hours until the HMS Londonderry, docked in Puerto Rico 530 miles away, responded to distress calls. But island officials became edgy when the British frigate took two days to arrive. They were fearful the burning hulk would sink and block all traffic in the harbor.

When the British ship finally arrived, its captain made a valiant effort to tow the now listing 18,427-ton monstrosity toward the south end of the island where it could be beached. The tow covered only three miles in six hours when a tropical storm interrupted operations and broke the line. Water-logged and half immersed, the proud passenger ship landed on its keel as it sank rapidly in 165 feet of water off Point Saline in the southwest corner of the island. Listing to starboard, the Bianca-C is alluded to as the “Titanic of the Caribbean” owing to her size and senseless sinking.

Visibility averages 100 feet unless tropical storms churn up the waters. Much of the wreck can be explored in 100 to 130 feet. The fantail broke away and many massive steel plates from the superstructure are scattered nearby. Starting at the smokestack and heading toward the stern, the wreckage opens up revealing what remains of snug cabins and elegant cruise ship amenities. The upper deck and swimming pool have collapsed but are still easy to identify. Dive buddies clamber as they take turns having their picture taken “swimming” in the pool.

Windows and portholes still adorn the port side and imposing coral covered winches stand tall on the deck. Divers can choose from many entries and exits among remains where ambient light is ever present. Abundant marine life is everywhere. Eagle rays and green turtles often frequent the bow, while the stern is home to green morays and blackbar soldierfish. Schoolmasters hover over black coral trees that favor shadowy locations away from strong sunlight. Porgies and queen angelfish circle the ever-present fire coral that clings to well preserved railings. Along the open water perimeter, great barracuda and amberjack appear from out of nowhere and then disappear as quickly as they arrive. Their presence adds to the thrill of the dive.

Most divers agree that a shipwreck of this magnitude might be visited dozens of times and still not be thoroughly scrutinized. “More reason,” one diver mused, “to plan another trip to Grenada.”