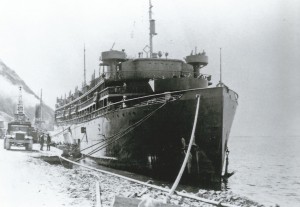 In a recent newsletter published by the The Four Chaplains Memorial Foundation, Philadelphia, Pennsylvania, retired U.S. Navy Captain Louis Cavaliere cites the organization’s “remarkable communication” through Web and Facebook pages. He says there’s renewed interest in the heroic story of the United States Army Transport (USAT) SS Dorchester and the sacrifice made for God and country by the four chaplains who were aboard during the tragic event. The sinking of the 5,649-ton troop carrier remains one of the most touching sagas of WW II.

The Dorchester, a converted coastal steamer, was sailing from Newfoundland to a U.S. base in Greenland, February 3, 1943. After a week at sea, she was 150 miles from her destination when the captain alerted the U.S. Coast guard convoy Tampa, Escanaba and Comanche of a sonar-detected German U-boat reported in the area earlier. Orders were sent down from the bridge for all passengers and crew to wear lifejackets until daybreak when there would be air cover from the base. Some of the soldiers who were bunking deep in the hold disregarded the order complaining of heat emanating from the vessel’s engines. 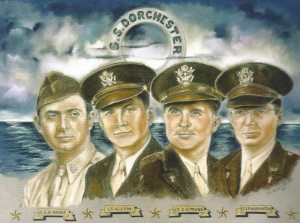 Close to an hour after midnight, a periscope broke the cold Atlantic waters and the U-223’s lone torpedo hit its target dead-on. The explosion in the boiler room cut the electric supply, knocked out the radio and released suffocating clouds of steam and ammonia gas. Some on board died instantly, while others were trapped below deck. As the ship listed sharply to the starboard, Capt. Hans Danielsen gave the command to abandon it.

Fear and confusion ensued as the 368-foot vessel slipped beneath the icy waters within 27 minutes of the captain’s order. Lifejackets were scarce—many aboard refusing to wear them at all times—and some of the lifeboats became overloaded. But amid all the turmoil, four U.S. Army chaplains stepped forward and calmly opened a storage locker, distributed more lifejackets and led the men to the boat stations. When the supply of jackets was exhausted, each chaplain gave up his so others might survive.

Several survivors cried as they watched this scene of love and sacrifice. One looked back at a sight he recalled for the rest of his life. He recounted, “The chaplains gathered the men at our lifeboat and led us in prayer and a hymn. Then, as our boat was launched, I looked back and saw them, arms linked together in brotherhood, their heads bowed in prayer. It was the most devout thing I’ve ever witnessed or could hope to witness in my lifetime.” 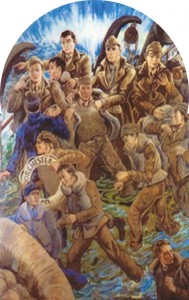 The coast guard cutters rescued 230 of the 902 men aboard the Dorchester. Depth charges couldn’t be dropped for fear of injuring survivors in the water, but the sub was long gone. It had achieved its goal, yet it too was destined for destruction—sunk by a British warship in the Mediterranean, March, 1944.

There were other heroic acts that night, but the significance of the sacrifice by the four young men of cloth transcended other deeds when news of the interfaith cooperation hit the headlines. The Distinguished Service Cross and Purple Heart were awarded posthumously December 19, 1944 to the next of kin: George L. Fox (Methodist); Alexander D. Goode (Jewish); Clark Poling (Reformed Church); and John P .Washington (Roman Catholic). In February 1951, the Chapel of the Four Chaplains, an interfaith memorial, was dedicated in Philadelphia, Pennsylvania. Rev. Daniel Poling, Chaplain Mark Poling’s father, presided over the ceremony, which was attended by President Harry S. Truman.

For more information go to: www.fourchaplains.org