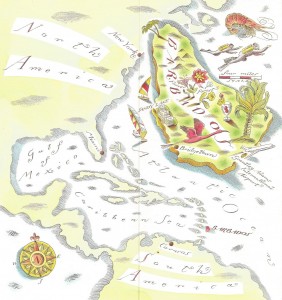 When Englishman Charles Wolverstone founded Barbados in 1628, he wrote in his log that he bumped into an “out of place island.” The pear-shaped 166-square-mile island does seem misplaced compared to the graceful, curving half-moon pattern of other islands that stretch from Puerto Rico to South America. It may stand alone, but not out of sight, nor out of mind, as throngs of tourists visit this easternmost West Indies island.

Just as Wolverstone bumped into Barbados more than 300 years ago, veteran dive guide Willie Hewitt and I bumped into seven shipwrecks in three days. Yet, we hardly scratched the surface of the hundreds of ships lost off the island in centuries of seafaring mishaps. Willie loves the Stavronikita, better known as the “Stav, a 355-foot freighter whose upper decks and superstructure are easy to reach at 70 to 80 feet. Scuttled in 1978 as an artificial reef for divers and fishermen, this “dark horse” as Willie calls it, sits upright in the sand surrounded by fish and coral. 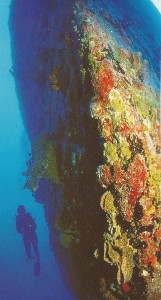 Bright purple sea whips and yellow finger sponges cling to gears, chains and cables spread across the deck. Damselfish, blue tangs and sergeant majors play host to divers inside deckhouses that have been stripped of their doors for safe entries. A red and white hawkfish hovers near a porthole hidden by thick marine growth. Both fore and aft cabins are connected by passageways that wind through the wreck. Large windows have been removed to provide easy swim-throughs and ideal backdrops for photos. Local divers say they’ve explored the Stav a dozen times and have yet to see it all.

The Pamir, a 180-foot derelict freighter sunk in 1983, is a relaxing second dive 25 to 60 feet deep. Sunlight barely penetrates the shadowy interior of the deckhouse where barjacks and yellowtails follow our bubble trails. A coney and some silversides circle the bulkhead and disappear into an open cargo hold that’s safe and fun to explore.

There might be some current running through the Friar’s Craig, a freighter sunk in 70 feet of water off the island’s south shore. Broken in half and listing slightly to starboard, the wreck has a matrix of coral colonies growing throughout its structure. About the same size as the Pamir, but a little further from shore, the ship rests in a sort of no-man’s land that gives it a ghostly appearance. 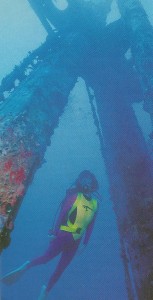 The Friar’s Craig isn’t far from Carisle Bay, a horseshoe-shaped anchorage near the capital of Bridgetown. Locals say the bay has more than 300 shipwrecks buried in the sand over six-square-miles. Cannons, cannonballs and ballast stones from early ships can still be seen in shallow water off Old Fort Reef in the southern part of the bay. Although visibility on the Friar’s Craig averages 50 to 60 feet, curious creatures here appear in the hazy perimeter, then suddenly disappear. First a barracuda, then a stingray, next comes a horse-eye jack, a turtle, a dog snapper and finally a margate. The wreck is loaded with critters. A peacock flounder tries to hide in the sand, while a flying gurnard spreads its purple-tipped pectoral fins and glides away. The starboard side of the vessel looks like a coral reef turned vertically on end. Thousands of sea plumes sway to and fro, surrounded by white sea anemones, tube worms and green algae. Inside the wreck, divers carefully drop down fins first into a small compartment penetrated by only a sliver of light. On the bottom they find tiny clumps of lacy purple coral growing in the shadows near sea bottles—small marine organisms resembling bags of sea water— tucked into crevices. 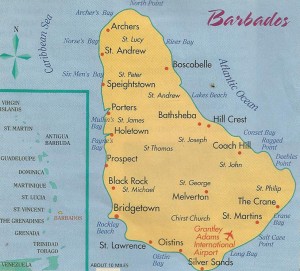 Although most of the shipwrecks lie off Barbados’ calmer east coast, the tugboat Lord Combermere is sunk near Batt’s Rock on the windy west coast. Its sister ship, the Lord Willoughby rests in 60 feet of water about a mile away.

As more divers visit this island, a little out of the mainstream, they’re discovering good food, down-home hospitality and plenty of shipwrecks. Most say that “bumping into Barbados” is well worth the detour.